Los Angeles, CA (The Hollywood Times) 2/12/17 – With 5 Grammys, and multi-platinum icing spread over nearly 40 albums, Ottmar Liebert has survived and thrived as a solo instrumental artist, one of the toughest gigs in music.  Liebert’s guitar based music is an ambitious mix of styles with a decidedly Flamenco sensibility.

Liebert was born in Cologne Germany and as a young kid flirted with Rock and Roll briefly in Germany and later in Boston before finding his muse and home in Sante Fe New Mexico.

In 1989, Liebert founded the first incarnation of his band (Luna Negra) and started his recording career with the DIY release “Marita: Shadows and Storms” which found distribution at the art galleries of local artist Frank Howard. Local radio stations began to pick up the record with strong listener response. Higher Octave Music thought enough of the album to spring for a re-master/re-release of “Marita….” An opening slot for Cool Jazz/Fusion monarch Miles Davis proved the gateway to a wider audience looking for adventure in their music. Liebert’s fusion of Flamenco and World Music secured him an international fan base. The rest is his story. 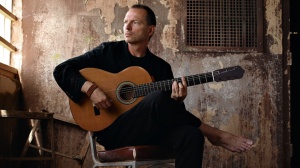 Ottmar Liebert spoke to The Hollywood Times.net recently while on tour. Liebert will make a stop at The Canyon Club in Agoura Hills on Sunday February 12th.

Success breeds contempt (it seems) in the purist corners of the Flamenco community. Ottmar is unconcerned about criticism of his Flamenco driven fusion of styles and genres, yet is still aware of his roots:

OL: “It might be frustrating IF I wanted to be a traditional Flamenco guitarist. Since I see myself as an outsider who wants to experiment and fuse different elements and patterns, I don’t mind the purists. I think that the quest for purity is a rather silly one. Every time a musician, or politician, or anyone uses the word purity it
makes me cringe. When we follow the thread back we always find that at the heart of most great art was a meeting of different cultures. This is true for Jazz and also true for Flamenco. The deep Flamenco rhythms all came from the Arabic culture. The 12/8 Bulerias or Solea for example. The group of rhythms called Tangos, which also includes Rumba, was brought to Spain from the Caribbean by sailors. Purity is a
silly quest. Human culture and knowledge grows fastest by adapting the ideas adopted from other cultures. That was true for the Persians, for the Greeks, for the Romans, and is still true now.” 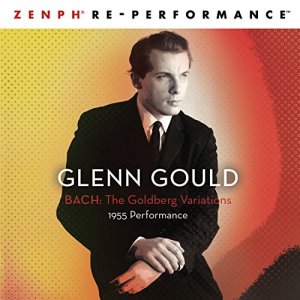 With recorded music being devalued to nothing by free access, Liebert has adapted to the flip-flop of the record/tour cycle with a heavy emphasis on touring as a revenue source:

OL: “Yes, of course it is the same for me, also. The music business is the only business I can think of where the basic paradigm was turned upside down like this. We have to tour to earn a living. Except for a smaller and smaller group of artists at the top, we can’t make a life from
recordings. Which is too bad, because I rather enjoyed that people like Glenn Gould could choose to stop performing and concentrate on recording. I think that made our world
richer.”

Liebert looked back wistfully to the golden era of the 90’s  when record sales supported profligate tours for bands great and small across the country and the world. He also gives us fascinating insight regarding his conversion into a small mobile, intelligent touring unit:

OL: “In the Nineties, because of CD sales, we could afford to travel with two buses, and a 18-wheeler carrying a whole PA, lighting trusses, lights, moving lights, and so on. Slowly we shed most of that, and for the past decade we have toured with one bus that pulls a trailer which contains our instruments, microphones and a digital mixing console. We don’t carry a sound system anymore, instead we use whatever the venue has available. We don’t carry lights,
or even a lighting designer. We don’t travel with roadies and we rely on a local person to do the lighting for our concert. Instead of traveling with a monitor engineer we carry little mini-mixers that allow each band member to mix their own monitoring sound.” 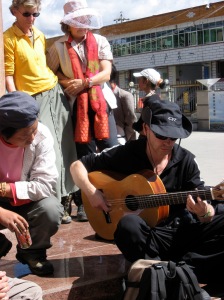 In 2006 Leibert was ordained as a Zen Monk. Again, a fusion:

OL: “Playing guitar is a practice. So is zazen. I have played guitar since I was 11 and sat in meditation since I was 15. The two practices are so connected in my mind, that I can’t tell where one stops and the other starts.”

I asked Liebert about how he taps into fresh ideas and his recent work:

OL: “I don’t know. Creativity is a bottomless pit. There is always more. After releasing the “Waiting n
Swan” album (Tangos Flamenco X Reggae) in November of 2015, I immediately started working on “slow”,
which is a solo album, using just one guitar for all of the sounds. It was released at the end of 2016. Since then I have started working on a new album with the band, and it will have a couple of new sound elements that are totally new and haven’t been heard before.” 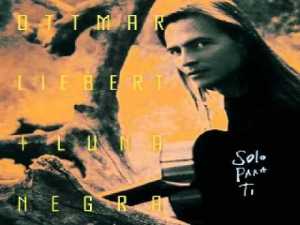 Reigning Flamenco heavyweight Paco de Lucia has dissed Leibert’s approach to Flamenco (while at the same time) pushing his own brand of sacrilege –  the Flamenco Nuevo movement. Ottmar was generous in his response:

OL: “Paco was an amazing master of the instrument. But I imagine it made him not a little mad that he would go to a bullfight in Spain, and could hear my music, he would turn on TV and
they would play my music. And his own record company used my name and wrote this on a promo CD: after the popularization of Flamenco by Ottmar Liebert, we present you… etc.”

Ultimately, Ottmar had the final word when his début shot to the top of the charts: 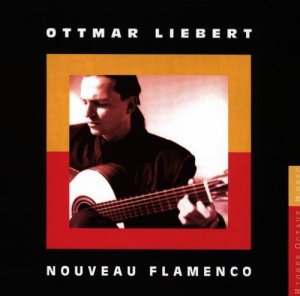 OL: “My début album “Nouveau Flamenco@ sold more copies than any album by a Flamenco guitarist. I was told that it was the highest selling instrumental acoustic guitar album ever.”

OL: “We are planning some really interesting sounds for my next album, using EDM techniques but while playing acoustic instruments.”