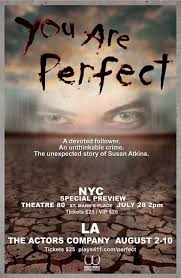 West Hollywood, CA (The Hollywood Times) 8/1/18 – Convicted Manson Family member Susan Atkins is the focus of a critically-acclaimed off-Broadway production called YOU ARE PERFECT starring Lindsay Danielle Gitter, Kristin Samuelson, and Michael Wiener. Written and directed by Cyndy A. Marion, this 75-minute one-act play tells part of Susan’s sad life story through the use of only three characters, one of whom is Charles Manson himself. 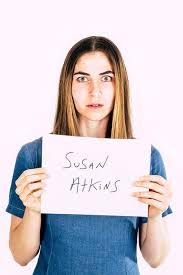 YOU ARE PERFECT will be presented at The Actors Company Theater located at 916 North Formosa Avenue in West Hollywood from August 2nd through August 11th, 2018. The play will be performed Wednesday through Saturday at 8 p.m. and Sunday at 3 p.m. The general admission ticket price is $25. For reservations and information, call (323) 960-5521.

Charles Manson’s “family” of followers, which included Susan Atkins, committed a series of nine murders at four locations in California over a period of five weeks in 1969. Known within the Family as “Sexy Sadie,” Atkins was convicted for her participation in eight of these killings that included the infamous Tate murders. For this she was sentenced to death, a sentence later commuted to life imprisonment. 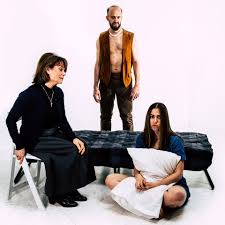 Atkins was incarcerated for nearly 40 years from October 1st, 1969 to September 24th, 2009. A native of San Gabriel, she was California’s longest-serving female inmate at the time of her death as many older Angelenos may still remember.

These facts of Susan Atkins’ life are sketched in during YOU ARE PERFECT. Her hard childhood as the daughter of alcoholics is also touched upon. The secure middle-class home in which Atkins had grown up gradually disintegrated after her mother died of cancer in 1963 and she fell under the spell of Charles Manson four years later.

Left homeless by a police raid, Atkins joined Manson and his commune on a summer road trip to California. She bore a son by another man in 1968, but her parental rights were terminated upon conviction.

Drugs and sex were a major part of the Manson Family scene. The gruesome 1969 murders were committed under the influence of substances. 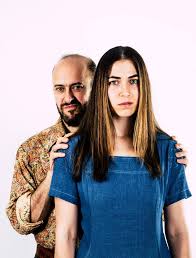 Susan Atkins was present at the murders of Sharon Tate, director Roman Polanski’s wife, and the couple’s unborn baby, though YOU ARE PERFECT indicates that she did not kill them. Instead, Atkins wrote PIG on the wall in Sharon Tate’s blood.

Killing the “pigs” (rich, greedy white people) was Charles Manson’s mission in hopes of provoking an apocalyptic race war called Helter Skelter. In YOU ARE PERFECT, Manson appears several times in projected form on the back wall, incoherently ranting about the “revolution” he hopes to start. “I am the Alpha, and the Omega. . .” he claims.

The play’s two female cast members, Lindsay and Kristin, both saw parallels between Manson’s demagoguery and that of present-day global tyrants. Notably, Manson manipulated his followers to commit all kinds of crimes while failing to take part in them himself. 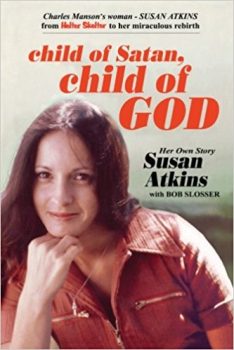 Atkins wrote an autobiography in 1977 called CHILD OF SATAN, CHILD OF GOD. This title perfectly summarizes the dualistic conflict seen throughout YOU ARE PERFECT, though this reviewer declines to give any spoilers about the specifics.

In the play, Susan Atkins finally realizes that she should have interceded for Sharon Tate and her baby. Tate had frantically pleaded for both of their lives and Atkins had infamously replied, “Woman, I have no mercy for you.”

Incredibly, Susan Atkins married twice while in prison. One of her husbands was Harvard Law School graduate James W. Whitehouse, who represented her at her 2000 and 2005 parole hearings. She had the right to conjugal visits and other privileges against the wishes of many public defenders and private citizens since her crimes involved many married victims, most notably Sharon Tate.

Atkins’ later years were just as difficult as her earlier ones. She died of terminal brain cancer after having one leg amputated. Most of her body underwent severe paralysis in prison.

As these grim biographical details about Susan Atkins gradually come to light in the play, the title YOU ARE PERFECT takes on an increasingly ironic tone. Atkins desperately needed to hear these words from the mouth of Charles Manson, who replace her father and Jesus in her mind’s eye.

All the action of YOU ARE PERFECT takes place within Susan Atkins’ tiny prison cell as she contemplates potentially life-changing legal issues. Her time with the Manson Family is portrayed through flashbacks. 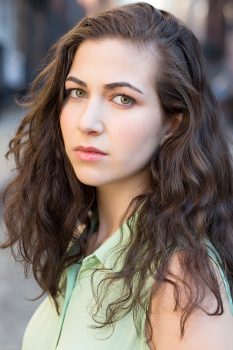 Actress Lindsay Danielle Gitter bears a strong outward resemblance to the lovely young Susan Atkins. Inwardly, Gitter admitted during a press interview that it could be difficult to shut this troubled character out of her mind after each performance.

No doubt viewers will have the same problem, meaning that YOU ARE PERFECT succeeds in shedding some new light upon the dark corridors of Susan Atkins’ psyche. There are many sides to every story, even those of murderers!

Regardless of our circumstances, we are responsible for our actions. A “penitentiary” is a place for repentance and, hopefully, redemption. Even a short play such as YOU ARE PERFECT can also create a space for reflection upon timeless moral questions.