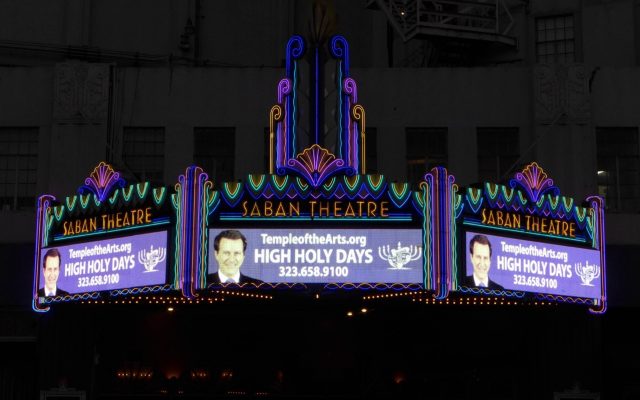 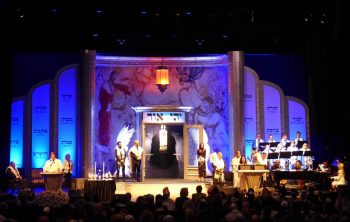 Beverly Hills, California (The Hollywood Times) 10/17/19 – I attended a beautiful and moving Kol Nidre service at Beverly Hills Temple of the Arts on Tuesday October 8th. Before the service began, I interviewed several of the important figures in the lobby of the magnificent temple.

Jimmy Steinfeldt: Please tell me about your organization.

“My name is Suzanne M. Reyto and I’m the chairman of Violins of Hope Los Angeles. I’m here to announce our campaign coming in March of 2020. We are here to introduce it to the public. The organization was started about 20 years ago in Tel Aviv by a violin maker who came from Poland. In 1996 the violin maker decided something had to be done about the collection of violins, violas, and cellos that were rescued from the Holocaust. Sixty instruments have been restored already. My husband and I were both in the Holocaust and we feel it is important to preserve these instruments. The organization has cultural activities like concerts in which the restored violins are played. There is also an education arm where we go into schools and take the instruments and teach students. We don’t teach Holocaust history per se we teach the history of the instruments and the history of the owners. This way students can have a closer connection then reading a textbook.”

“This particular violin is not playable. It will not be restored because the damaged area would require replacing much of the beautiful inlaid decoration. This violin however is a Klezmer violin used to play the music of the shtetl, folk music, played at weddings and similar functions.”

Jimmy Steinfeldt: You saved lives on April 27 this year at the Chabad of Poway. Please tell me about your experience.

Jonathan Morales: “I’m with the United States border patrol, El Centro station. The terrorist attack happened on the last day of Passover at Chabad of Poway. I’ve only spoken once before about this experience and that was at the White House. Now that the investigation is over I can speak freely about the incident.”

“It was the last day of Passover. I attended services alone that day. I usually go to services at a different congregation with my family and take my children but since a lot of the families were out of town they would have no other children to play with. I decided to go by myself that day and chose to go to Chabad of Poway. After an hour of the service the Torah was taken from the ark and we began to read from it. When we got to the fifth Aliyah at 11:23am two gunshots were heard in the foyer. Everyone looked around. I thought there were some kids outside playing with firecrackers. There was a brief pause and there was another series of gunshots. Then the gunman turned to the open door of the synagogue and started shooting in there. Everything got louder with the echo. I remember seeing things shattered by bullets. That’s when I realized this was an active shooter situation. Women started running with children looking for exits. Some of the adult men were trying to assist the elderly out of there. It was very chaotic a lot of people just got on the floor under there seats. It all happened in a matter of seconds. Everything happened so quickly. I said to myself I have to stop this I’m the only here with access to a firearm. It’s going to be at least five or ten minutes before the police get here. If I don’t intervene now this guy….he’s here to kill us all.”

“I ran quickly, got the firearm, ran out to the side doors. I scanned the sanctuary and saw he never made it inside the sanctuary. I ran to the exit doors and planned to get him in the foyer and attack him from behind but then he ran outside the building. I went outside, aimed, took my firing stance, and at the same time there were people running back and forth so I didn’t have a clear shot. I had to adjust my stance two times before I was able to engage him with shots. By that time he was getting into his car. I was able to hit his vehicle. My small revolver only had four rounds in it. I thought it had six rounds and I was now just feet from him and I was dry firing at him with no rounds. He was looking at me like he was looking at death. He put his head under the steering wheel and stepped on the gas and left the area. I was able to take the license plate down and give it to the police along with a good description of the vehicle. He was arrested a few minutes later about two or three miles away from the synagogue. I’m honored that I’ve been nominated by the International Association of Chiefs of Police for police officer of the year. You can read about that soon at https://www.theiacp.org/“

Jimmy Steinfeldt: You were invited to the White House.

Jonathan Morales: “Yes. A few days after the terrorist attack I got a call from the White House staff and I’m told the president would like to invite me to the White House as his guest for the national day of prayer. They asked if I was able to make it. I said sure, just let me tell my supervisor. I was on a plane the next day. It was a good experience meeting the president. We didn’t expect him to call us up to speak but he did. I just spoke a couple of words that were on my mind at the moment. I was very emotional, as the attack had just happened. Even now five months later the experience is very fresh when I speak about it. I still get emotional. It hurts to remember but it’s getting a little easier to talk about as time goes along.”

Jimmy Steinfeldt: Please tell me about your organization.

Lana Melman: “It’s called Liberate Art. I’m a 20 year veteran of the entertainment industry. I began as an entertainment lawyer. Then I was in business affairs, then into the creative end. I worked with the networks including CBS and studios including Columbia Pictures, and Warner Bros., and with producer Leonard Goldberg. I was a producer, writer for many years. I’m using all these skills now because it’s a huge war out there. I started Liberate Art in 2015 although I’ve been on the front lines since 2011. There is a tremendous link between Anti-Zionism and Anti-Semitism. As time goes on things have gotten worse. BDS (Boycott, Divestment, Sanctions) is using the celebrity of artists as a means of communicating slander and propaganda to demonize the Jewish state. BDS focuses on art and entertainment. We are a leading voice countering the cultural boycott against Israel. I have contact with about 1000 artists who are under fire and targeted to boycott Israel. We like to focus on an offensive strategy and educate the general public as well as members of the entertainment community about the dangers of a cultural boycott. It’s a threat to Israelis, and Jews by default. It also has a negative impact on art, artists, and audiences who are not free to choose what they want to see and hear. We do op-eds, we have a YouTube channel, and we entertain and have speaking engagements. We also serve as a platform for artists who want to support Israel and take a stand against BDS.” https://www.youtube.com/channel/UCQldN7wqT09iyJPDF6R6lAQ

Jimmy Steinfeldt: Tell us about your temple and congregation.

Rabbi David Baron: “This is Temple of the Arts religion through music, drama, art, dance, and film. It’s here in Los Angeles and we own this beautiful historic Saban theatre. On the High Holy Days we bring in many different artists and performers to participate in the service. We have some very special people with us this year, real heroes like Johnathan Morales, and Suzanne Reyto and her husband. We’ll be performing with one of the violins of the Holocaust. Vijay Gupta will be playing Schindler’s List together with Michael Fitzpatrick on cello. Later Vijay Gupta will perform Leonard Cohen’s Hallelujah. In this way we set the mood for a new year. With Yom Kippur we try to heal pains and problems from the past. We want to begin a new year whole and cleansed, giving and getting forgiveness with others.”

“When I was younger Kol Nidre was a somber and serious day. It still is because it is an absolution of vows or promises we made to god or to ourselves that we didn’t fulfill. It’s about jumping off to a better place in our lives by reconciling and getting in alignment with our true spiritual self. This requires work. Including going to someone you may have injured and apologizing. Someone you insulted, someone you hurt in some way. Also equally hard, maybe harder, is if someone comes to you who injured or hurt you being prepared to grant them forgiveness. So if you do the work, the holiday takes on a whole new meaning in a big way. If you are just mumbling the prayers it doesn’t get you to that place.”

Jimmy Steinfeldt: Tell me about the meaning of Kol Nidre for you.

Leonard Maltin: I’ve never attended services as warm and inclusive as these. This is due to primarily to Rabbi David Baron and also the cantor Ilysia Pierce, and the music director Sharon Farber. Rabbi Baron did our daughter’s baby naming 33 years ago and her Bat Mitzvah 20 years ago and 4 years ago conducted her wedding in our living room under the Chuppah.”

To learn more about Beverly Hills Temple of the Arts https://www.bhtota.org/ 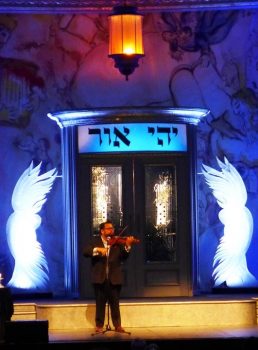