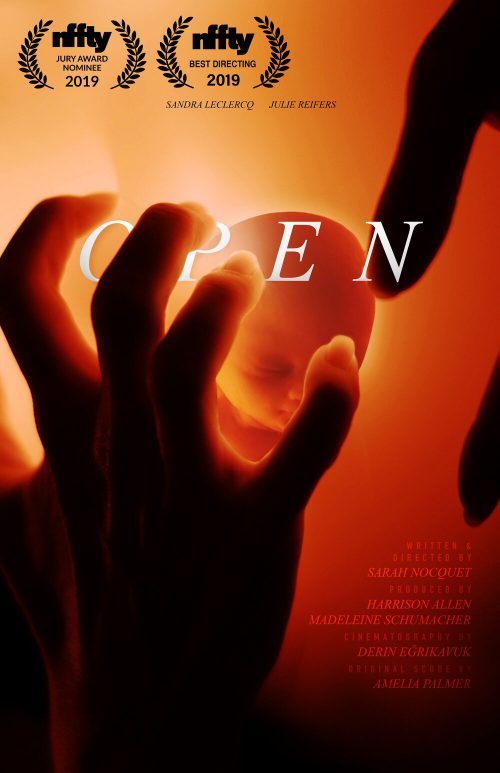 Los Angeles, CA (The Hollywood Times) 12/14/19 –  Sarah Nocquet is a writer-director who enjoys examining female relationships and toying with absurdism in her films. “I’ve always been drawn to writing female protagonists. The themes that interest me most are the ones that address women’s experiences of different pressures, whether personal or societal. At the time that I wrote Open, I was very interested in the link between paranoia and motherhood, and how different women experienced the transition from individual to mother.”

What led you to film?

Sarah Nocquet: I’ve always been interested in both language and visual art, and film revealed itself as the perfect combination of both. Growing up with a multilingual background, I was quickly fascinated with how language can be molded and played with to communicate greater themes and character dynamics. I was also encouraged to take a lot of pictures, and my school’s curriculum involved a lot of art history, which piqued my curiosity in visual arts. My mother was a writer and my father an illustrator, and they’ve each led me to cultivate an interest in each of their fields, which translates for me as the all-inclusive art of filmmaking.

You have directed many short films that have won awards. Please share a few and what the films meant to you.

Sarah Nocquet: The first real short film I made was a learning experience more than anything else. I shot it on the eve of my 19th birthday after three months of pre-production, which was the longest amount of time I’d spent on a film yet. Although production presented its fair share of challenges, I think I learned the most during the year-long post-production period. The mistakes that I made in continuity and lack of coverage were ones I vowed to never repeat. When the final product of Companionship And Her Husband hit the festival circuit, I was proud of my accomplishment but ready to move on. Fast forward to Open, a production in which I felt much more confident from the start, and which I am happy to share today as a sample of my work. Looking back on the shoot, the experience I had gathered from my previous short films allowed me to be firmer in my stylistic decisions and more precise with my directing of actors, and I think this progress is very clear in each of my films over the years. I went from second-guessing my direction in Companionship And Her Husband to winning an award for it with Open at NFFTY 2019.

You enjoy examining female relationships and toying with absurdism in your films. Please expound on this.

Sarah Nocquet: I’ve always been drawn to writing female protagonists. The themes that interest me most are the ones that address women’s experiences of different pressures, whether personal or societal. At the time that I wrote Open, I was very interested in the link between paranoia and motherhood, and how different women experienced the transition from individual to mother. I also wrote my first feature-length screenplay, Tickseed, with similar themes. In the Flight of the Kiwi, my latest short film, the protagonist is thrust into a wildly unexpected situation and is forced to come to terms with guilt, jealousy, and grief as a consequence. In line with this, I’ve found over the course of several projects that spinning a situation towards absurdism is what speaks to me most to convey a greater problem. Setting a conflict or relationship in a heightened, surreal world allows me to control the environment while still telling a relatable story. My goal is for the audience to become immersed in a world that entertains them by being different, and yet still recognize their reality reflected in it.

Tell us about your latest film, Open, that took home the Best Directing award at NFFTY.

Sarah Nocquet: Open is a thriller about the traumas of pregnancy, the post-partum experience, and giving up one’s sense of self for one’s child. Our protagonist, dark-haired, foreign, nine months pregnant, refuses to give in to the blonde, blue-eyed, all-American system of motherhood. She is made to consult Mabel Grace, a specialist in birthing visualizations, to be coaxed into giving birth. Mabel puts her into a hypnotic state, and when the expecting mother resists her fate, Mabel’s trance grows increasingly threatening and aggressive. Inside the hypnosis, our new mother must fight to save her baby from the overpowering forces of conformity. It stars Sandra Leclercq as the pregnant foreigner and Julie Reifers as the controlling hypnobirthing consultant. I think it resonates with audiences because every member of society -whether male or female, mother or not- has confronted the idea of giving birth before and been put off or scared by it. My film forces the viewer to come face to face with the creepy and unnatural elements that come with becoming a mother. It brings up issues of women’s freedom to maintain their identities outside of motherhood and remain in control of their bodies, which engages with every audience member’s personal opinions.

How is Flight of the Kiwi different from your other films? What challenges did you face while filming?

Sarah Nocquet: In making Flight of the Kiwi, I wanted to create a more realistic world than my previous films and bring elements of the absurdist tone that fascinates me into a more relatable situation. Flight of the Kiwi tells the story of a daughter who must face her passive-aggressive mother to finally move out of the family home but is forced to confront everything she assumes about their relationship when an accident happens. The complexity of this mother-daughter relationship opened the door for me to delve deep into nuanced characters and develop them with my actors (Jane Purnell and Eve Austin). Where my previous films often depicted tropes of society, I wanted to create a more well-rounded characters this time to challenge myself to get closer to portraying the truth. Their cycle of guilt and desire for affection is heightened by the presence of the mother’s cat, Kiwi. Working with an animal was our biggest challenge on set, but his presence greatly enabled their dynamic while also adding the absurdist touch I was seeking.

How do you feel that Woman Directors are seen in Hollywood?

Sarah Nocquet: Female Directors have always struggled to be respected and recognized in the mainstream, although the fact that they bring a sensibility and diversity of perspective to the industry that is desperately needed. I would love to see women directors acknowledged for their art and ability, and considered on the same playing field as the men in their discipline.

What is your mantra?

Sarah Nocquet: Don’t settle. As I’m working on a film, I always make sure to check that it still matches the expectations I had going into it and that I’ll be proud of every beat and cut once it’s finished and screening for audiences. It’s easy to fall into compromise when things don’t work out during production, but I think a mark of a good director is the ability to keep her/his vision in mind and see it to completion as it was intended.

Sarah Nocquet: I am currently writing my second feature-length screenplay, which follows a 40-year old woman who must compete with her estranged brother for her dying father’s approval. I am also editing two personal documentaries on my family: one on my Jewish American maternal grandmother, and one on my conservative French paternal grandmother.