A Conversation with Luke Goss

Los Angeles, CA (The Hollywood Times) 1/10/17 – LUKE GOSS has two words woven into the intricate and beautifully-colored tattoo that covers the whole of his upper right arm. But we’ll come back to that a bit later. If you don’t know Luke Goss quite as well as you should, please allow me to provide a brief refresher.

Goss has had quite a ride so far, and one gets the feeling that he has barely even scratched the surface of what he’s capable of doing. As part of the UK pop band Bros in the late 80’s, by age 18 he and his twin brother Matt – along with bass player Craig Logan – were chart-topping sensations with legions of screaming fans flocking to their every appearance, body guards surrounding them and personal assistants attending their every need. When the band flamed out after a few short years in a nose-dive of contractual disputes and overwork, Goss became a best-selling author at age 21 with “I Owe You Nothing”, an autobiography that took its name from the band’s biggest hit. For a millisecond, at the tender age of 22, it looked like he was washed up – in his own mind, at least. But after working with his own band for a time, he turned to acting, snagging the lead role of Danny Zuko in a major UK production of “Grease”. His performance gained him accolades (“Luke Goss is a revelation … his comedy timing is uniquely his own … and his stage presence is considerable …”) and his acting career began in earnest. Since then he’s appeared in dozens of notable projects on both sides of the Atlantic, won awards and built a substantial base of genre fans. Goss currently lives in Los Angeles with his wife Shirley. 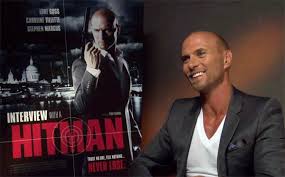 Spending an afternoon in conversation with Mr. Goss is a pure pleasure: wide-ranging, thoughtful, relevant. He is a passionate, generous actor who sees each part he takes on as a journey rather than just another job – and his thoughtful and caring esthetic is evident in his growing body of work.

As a performer Goss is incredibly adept at defying categories. This is an artist who would be fully capable of embodying a definitive Iago or a superb James Bond, and pretty much everything in between; see his “Nomak” in “Blade II”, or his small-town cop in “Operator”, or the crime family enforcer “Luther” in the TV series “Red Widow”, to name but a very few of the wide variety of roles to which he has brought his keen mix of intellect, physicality and emotional truth. And I defy anyone to tell me – after watching ten minutes of Goss in “Interview with a Hitman” – that he wouldn’t make a 21st Century James Bond as good or better than any in recent memory (and I’m a big Daniel Craig fan). He’s been compared to Jason Statham, from whom he took over the lead in the “Death Race” franchise – and Goss is certainly a fantastic action guy – but beyond that the comparison doesn’t hold. Statham is a blunt instrument; Goss is sophisticated and multi-layered, with an underlying intelligence and emotional accessibility that pierce through everything he does. It’s like comparing a Chev and a Lamborghini; they’re both cars, but beyond that there’s little cross-over.

Few actors can convey a character’s entire history with a look, but he can – and it’s riveting to watch. And no matter what type of character he’s playing, he always draws the audience’s sympathy for the character’s point of view; when, as the antagonist Prince Nuada in Guillermo del Toro’s “Hellboy II: The Golden Army”, he pleads from a rooftop for Hellboy to understand the fantastical world that has been lost by letting humans overwhelm the planet and begs him to come back and rejoin his own race, for a long moment you absolutely want Ron Perlman’s Hellboy to say “Hell yeah!” and join Nuada in what is clearly, for the Prince, a righteous fight of sacred proportions.

If Goss’s skills and abilities are sometimes above the material he’s in, he doesn’t condescend or hold back. Whether he’s working with a genius like del Toro or a director with more B-level sensibilities, he’s all in. That’s not to say his life as an actor has been straightforward. Despite the fact that he’s done over fifty films – some of them, like “Hellboy” and “Blade”, prestige franchise projects – he still frequently has to audition for parts, which for many actors never gets easier, especially in today’s world of distraction and split attention span. “It’s so awkward acting when people are looking at their iPhones,” says Goss. “I love, passionately love, film, I love acting – I couldn’t live without it – but you’ve got to have some dignity. But in this industry – unless you’re an ‘A’ or ‘double A’ actor – your body of work doesn’t seem to count. If you don’t jump to take on just any role, and instead have an idea of what you want to do, of roles that make you excited, you’re probably going to have a slower-building career.”

Despite the inevitable frustrations, though, Goss says “I live in a place of gratitude. There are a lot of lovely, lovely people in this industry – at the higher echelons especially, they’re civilized and respectful. When I’m lucky enough to be involved in those kinds of projects I always feel that wow, this is how it can be.” Goss takes a sip of his tea, smiling.  “That’s my search – it’s like truffles. They’re out there – you’ve got to keep digging. If you don’t want to get your hands dirty looking for truffles, go home!”

Goss is adding to his versatile skill set by stepping into the director’s chair with “Your Move”, a feature he has written, is co-producing and will play the lead in. On a Facetime call with his wife, an equestrian who once rode for Mexico in the Olympics, Goss’s character, David, watches horrified as she and their daughter are abducted while visiting her parents in Mexico. He heads to Tijuana to find them and take revenge. Though the plot sounds similar to the “Taken” series, Goss wrote it several years prior to that series coming out and, unlike Liam Neeson’s character, David has no “particular set of skills” with which to “make life hell” for the bad guys. Instead, he must rely on wits, raw nerve and desperation as he scrambles to get his family back. As a man who in real life has raised a daughter and been married for many years to a woman he clearly adores, Goss says he acutely felt the fear and helplessness his character experiences on his journey of rescue, revenge and self-revelation. As an actor, it’s that measure of self awareness that can make watching Goss’s work so rewarding; one feels that he’s bringing all his experience, everything life has taught him up to this point, to everything he does, and that lends an emotional veracity to his performances that at times can take your breath away.

The road to producing “Your Move” has not been without significant speed bumps, but Goss is adamant about not focusing on “the making of”, because he believes the audience should be allowed an unfettered and unbiased viewing experience. Nevertheless, his advice for anyone embarking on the path of the independent filmmaker is succinct. “You have to be ready to traverse a real emotional rollercoaster. There are no guarantees as to people’s ethics – and people are funny about money. You’ve got to find people who love film – ideally, who love YOUR film.  Not someone looking to recoup their money and get a fast 20% return on their investment. Someone who understands that if you take the time and do it right, the ROI (return on investment) can be ten-fold.” At the time of my conversation with Luke, on a warm LA day in early December, the difficulties had been sorted out and he was looking forward to heading back to Tijuana to embark on the final week of shooting. The film is due to come out in 2017.

Also on the agenda for 2017 is a Bros reunion tour at London’s massive O2 Stadium. Goss expresses both gratitude and humility over the resurgence of interest in Bros, a satisfying turn of events that underscores the lasting value the band has had for its fans, and helps cement its unique place at the top of the 80’s pop hierarchy.  (www.theo2.co.uk/events/detail/bros)

In whatever he takes on, Luke Goss seems to focus on what’s best about the human spirit, to a genuine enough extent that even when he is expressing concern or frustration, he speaks with respect, kindness and a balanced view of people and the real world – a trait that makes his perspective truly refreshing.  In his own words, he makes a full-on commitment to the things he stands for – and with that said, we can get back to the two words engraved on his upper right arm: one is “Love”, and the other is “Compassion”.  Words to live by, etched in a spot where he – and the people around him – can see them, every day.