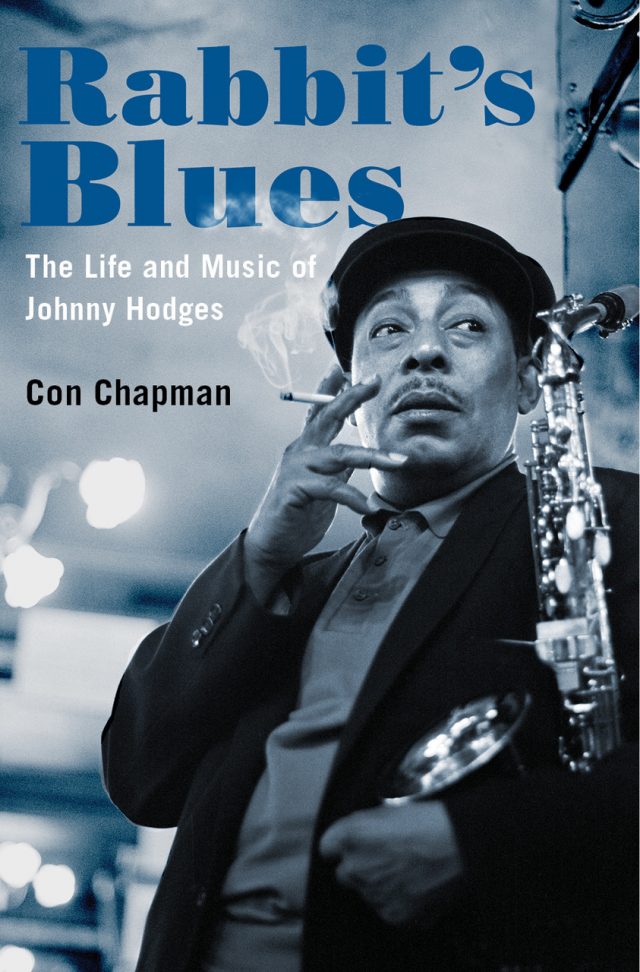 (The Hollywood Times) 9/1/19 – In a 1944 issue of DownBeat a reviewer gave his impression of a new alto saxophonist.  “Driving force . . . is Charlie Parker, destined to take his place behind [Johnny] Hodges as a stylist on alto sax.”

It is difficult today to imagine that Johnny Hodges, whose name has been all but forgotten, was once ranked ahead of Charlie Parker, considered the greatest jazz alto ever, but at the time Hodges had won the DownBeat Readers Poll for the instrument every year since 1940.

Parker’s nickname was “Yardbird” because of his fondness for chicken, shortened over time to “Bird” because it suggested the heights of invention that Parker flew to.  Hodges went by many nicknames, but was most widely known as “Rabbit,” which he claimed he acquired because of footspeed he used to escape truant officers in his youth.  Harry Carney, his boyhood friend and bandmate with Duke Ellington, said the name was applied because Hodges looked like a rabbit when he nibbled on lettuce and tomato sandwiches.

The alto baton was passed from the Rabbit to Bird as jazz shifted from swing to bebop, and that handoff marked a watershed: before, it was America’s popular music, danced to on a night out for fun; after, it was a music more of the mind than the heart, which audiences absorbed sitting down.  The story of that evolution from one jazz format to another is like a tale out of Darwin, with natural selection transforming the music into a new species.

In his teens Parker moved to the Vine Street neighborhood of Kansas City, Missouri, a center of nightlife under a corrupt mayor.  Nightclubs never closed, and an independent strain of regional jazz developed.  It was a tough school for a young musician; one night when Parker joined a jam session drummer Jo Jones sent a cymbal flying across the dance floor to register his low opinion of his playing.  Embarrassed, Parker determined to prove himself.

On Thanksgiving Day, 1936, Parker was traveling to a gig when the car he was riding in hit a wet patch and skidded off the road, rolling over several times.  Parker’s spine was fractured; he used his recovery time to “woodshed” and improve his technique.  When he returned to Kansas City the next autumn, “the difference was unbelievable” according to bassist Gene Ramey.

Parker’s transformation wasn’t complete until he moved to New York in 1939 and was exposed to musicians such as pianist Tadd Dameron, who were pushing the boundaries of jazz.  One night Parker joined a jam session that included Dameron, who recalled that “we were playing “Lady Be Good” and there’s some changes I played . . . where he . . . ran over and kissed me on the cheek.  He said ‘That’s what I’ve been hearing all my life.’”

Another influence on Bird was William “Biddy” Fleet, a journeyman guitarist.  Bird had tired of the standard swing chord changes, and thought “there’s bound to be something else.”  Fleet showed Parker new progressions, and one night while playing “Cherokee” Parker realized how he could achieve the effect he’d been searching for.  In Bird’s words, he “came alive,” and bebop was born.

The birth of one style in an art form means the death of another, but it would take time for Parker to dethrone Hodges.  Other musicians “couldn’t figure out what Bird was doing, because they had their minds set on Johnny Hodges,” according to Fleet.  Hodges was “playing the right horn . . . and doing a beautiful job at it.”

Hodges disapproved of Parker’s style, as a member of the old guard in any trade might react to a newcomer.  Ben Webster, who refined his technique by imitating Hodges’ style, was shocked at Parker’s facility at high speeds. “The guy scared me to death,” he said.  Hodges was unmoved by the new wind that blew in from Kansas City; he had great respect for Parker, but refused to change.  “A lot of ‘em tried to jump on the Charlie Parker bandwagon,” he said, but he stuck with the style that was uniquely his.  “Too late for me to change.”

Parker ultimately expressed regret that he sacrificed tone to speed.  One night over drinks with saxophonist Jimmy Abato, Parker “started to cry, tears running out of his eyes,” saying he had “hurt a lot of young saxophone players.”  “What are you talking about, you’re the god of this thing,” Abato said, but Parker replied “I never liked the way I sounded.”

Hodges—unlike Parker–had broad appeal, according to Jimmy Heath, who emulated both.  Hodges “sang,” Heath said; he “could have gone to any country town in the South and played the saxophone and people would have liked it better than what Parker was doing.”

The knock against bebop was that you couldn’t dance to it.  According to novelist Ralph Ellison, boppers “were so engrossed with their experiments that they didn’t provide enough music for the supportive rite of dancing.”  The art form changed—matured in one sense, lost its innocence in another—and an intellectual aesthetic replaced a physical and emotional one, to its commercial detriment.

Upon leaving Parker in 1951, trumpeter Red Rodney formed a group and his manager got on the phone to find them work.  On a call to a Boston nightclub, his manager started his spiel by saying “I got this terrific bebop band for you. . .”

Con Chapman is the author of “Rabbit’s Blues: The Life and Music of Johnny Hodges” (Oxford University Press).