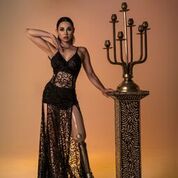 Celebrity designer DALIA MACPHEE recently shot her latest campaign themed:  “What is beauty? I am more than my body.” 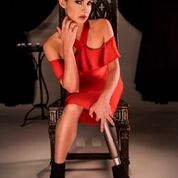 The model is a woman who had a tragic accident exactly a year ago, and sadly lost one of her legs. When they told her they would be removing her left leg she made a choice that she could either turn this into something tragic or something positive. 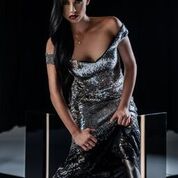 Fashion Designer Dalia MacPhee has rocketed to the upper echelon of sought- after designers in Hollywood. She’s been called the “IT” girl of the red carpet and Entertainment Tonight has referred to her brand as “Couture with a Conscience.” The Consul General of Canada listed her as an emerging phenomenon in Canada with significant designing talent, and Google Inc has touted her as “making waves in fashion and technology. Dalia’s designs have graced the figures of celebrities such as Hilary Duff, Heidi Klum, Gina Rodriguez, Brooke Burke-Charvet, Olivia Munn, Amber Riley, Nina Dobrev, Niecy Nash, Alyssa Milano, Serena Williams, Scarlett Johansson, Khloe Kardashian, the stars of The Vampire Diaries, Big Bang Theory, Pretty Little Liars, True Blood, and Glee to name a few. 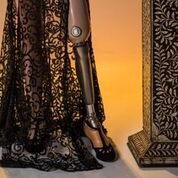 A TEDx speaker, Dalia has been published in Forbes, Success, Inc., Entrepreneur and The Huffington Post and featured on CBS , ABC and Fox News. Recent fashion  projects include an underwater celebrity fashion campaign to bring awareness to violence against women and a global fashion show to promote world peace. Dalia is the inventor of the world’s first light up jeans and “brilliant” purse.