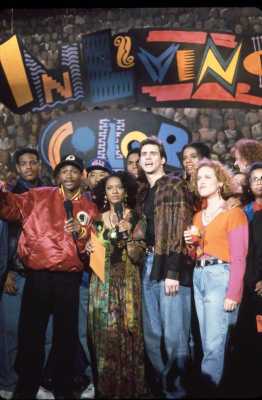 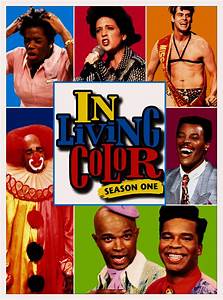 Today The Hollywood Reporter released an in-depth oral history of In Living Color with Keenen Ivory Wayans , Jim Carrey, David Alan Grier, Carrie Ann Inaba, and more. Twenty-five years after the groundbreaking sketch show left the airwaves in a blaze of controversy and conflict, the cast and crew dig in deep; sharing never-told behind-the-scenes stories of the series that execs pitched to Wayans as a “black ‘Laugh-In.'”

Tommy Davidson, on why he got In Living Color over SNL: When I landed In Living Color, I was a hot comic. A week before getting the job I had met with Lorne Michaels in his office in 1990 [for a potential SNL spot]. He lined it up for me and said, “I don’t want a black comedian. Eddie Murphy was a mistake. I don’t want a person that stands out.” I was confused. I was born black. There’s not a zipper in the back of this thing.

Jim Carrey, on sketches that didn’t make it to air: We were warped out of our minds. We presented several sketches that didn’t make it on the air, things that were just too insane, like the abortion rally ventriloquist. We came up with a sketch called “Make a Death Wish Foundation” about a dead kid whose posthumous wish was to go to an amusement park. That did not make it on air, either. But I came up with the face of the kid, and it eventually turned into the “Fire Marshall Bill” face.

Grier, on the show’s … fans: Spike Lee hated the show. He got really mad at us because he thought we were over-the-top about Do the Right Thing. He did not like us making fun of him. People would get angry when we poked fun at them. Arsenio Hall too — anybody that we really poked fun at.

Inaba, on working with Jennifer Lopez: There was magic in the skits, and the Fly Girls had this cult following.

[Choreographer] Rosie Perez pushed us hard. She didn’t know how to pronounce words like “pirouette,” but it didn’t matter. She had a vision. And Jennifer Lopez, we all knew she was destined for greatness. She was a very determined young woman.