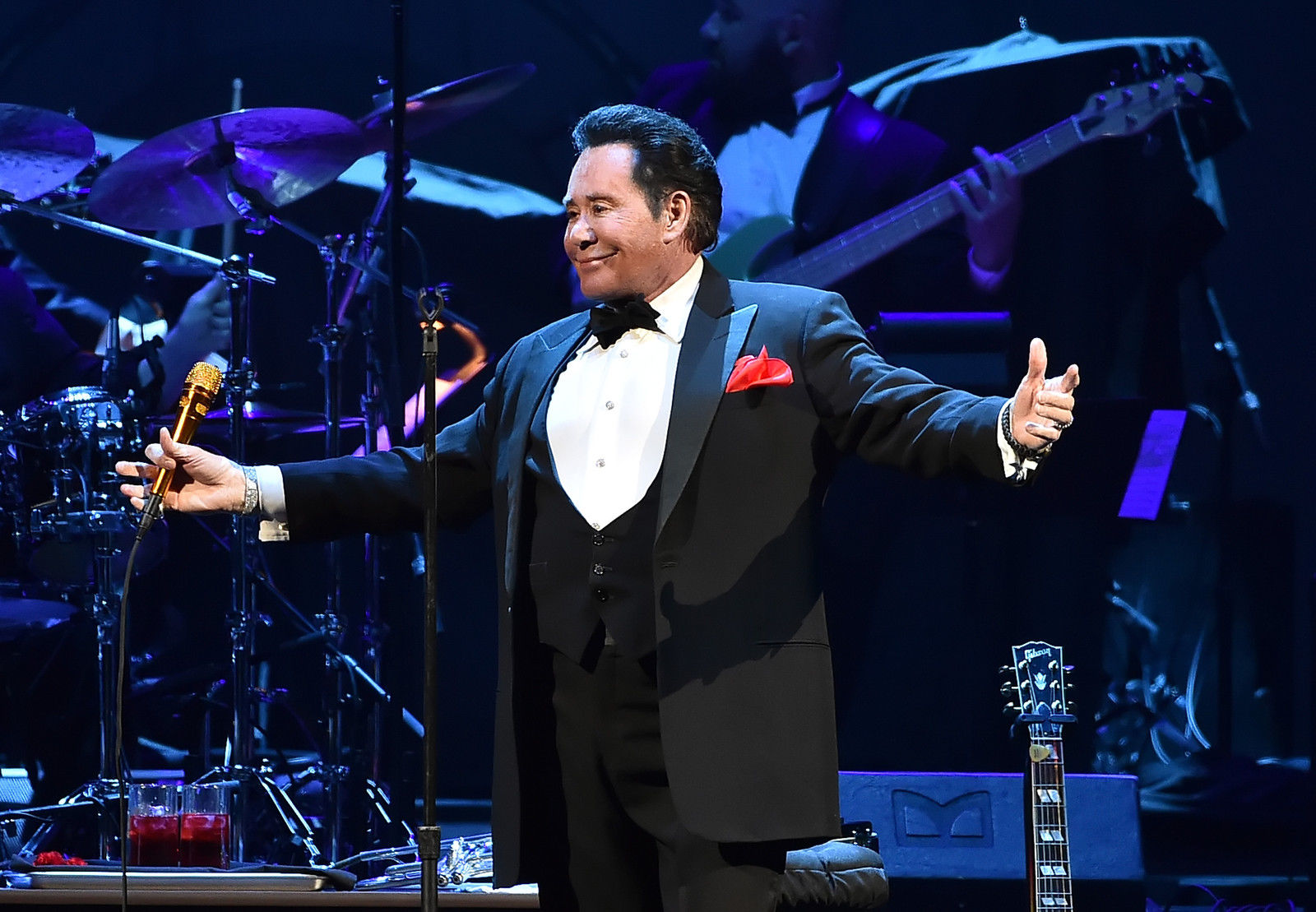 Beverly Hills, CA (The Hollywood Times) 4/10/17 – “I am from the great state of Virginia, I am half Native American, a quarter Irish and a quarter German and stayed in Virginia until I was eight years old.”  Wayne Newton told the audience at the Saban Theatre in Beverly Hills this past Friday night.

Mr. Newton went on to tell the story of his early career as follows:

“I was sickly kid and we moved to Phoenix, Arizona, because I had bronchial asthma.  My brother and I had a small little TV show in Phoenix and Marty Robbins stopped by to star on our show.  At 15, still doing that television show, a gentleman, an agent, his name, believe it or not was Bookie Levin (Julius), that is a fact.  He came to Phoenix and saw the show and called our parents and told them he wanted us to come to Las Vegas to try out for a show.  My brother and I jumped aboard a Greyhound bus and auditioned at the Fremont Hotel, downtown Las Vegas.

The gentleman listened to two songs and got up and left.  He stuck his head back in the door and said, ‘I am going to get you a work permit’ and I will hire you for two weeks.  The law was that you had to be 21 years of age to work in a casino.  It took about two weeks and Bookie called to say he got us a work permit and I still have it to this day, it said ‘Wayne Newton will be allowed to work in the Fremont Hotel he is just not allowed to be in the place he is working.” (Laughter erupted)

“I have never figured that one out!”  We did six shows a night, six nights a week and 40 mins on and 20 minutes off and we had to go outside.  It turned out to 52 weeks.  That is how I got to Vegas and that is how I got to stay there.”

Wayne Newton talked about his female commentator who would come out and read the questions that the audience had for him and that she was an attorney, and did some TV and was also a writer and her name was Kathleen McCrone.  He didn’t tell the audience that this was his wife until she was ready to exit the stage 20 minutes or so later.  Nicely done Mr. Newton.

First Question: How many movies have you done?

Wayne Newton:  As of last week, I just did my fiftieth movie.

Second Question:  What is your favorite movie of those 50?

Wayne Newton:  I guess Vegas Vacation, would be one of my favorites.  I was in a James Bond movie called “License to Kill” and I played a minister who was selling drugs, then I did a movie with Andrew Dice Clay, called “Ford Fairlane.”  I enjoyed that movie.  My all-time favorite thing I did was a mini-series for television called “North and South” and I played the warden of Andersonville prison in Atlanta during the Civil War.  Would you buy a used car from that guy?” A photo of Newton in costume was shown on the big screen.

Third question: What is the most embarrassing thing that has happened to you during a show?

Wayne Newton: “Back to the Fremont days, if it could happen it did!  They used to have these bar stool next to the stage in the lounge and these two guys within a week, died, had a heart attack on the bar stool and feel over and died.”

Kathleen chimed in with, “I could the headlines in the newspaper the next day, Wayne Newton’s killing them!”

Wayne Newton went on to say that he was flashed on stage and that was when his voice started to change. (Laughter)

Fourth question:  What was your first recording?

Wayne Newton:  My first recording was when I was eight years old.” They showed him and his brother performing his first song.  He asked if that did not sound like Donald Duck.   He said they sold three copies, his brother bought one and his Dad bought one too.

Fifth question:  How many instruments do you play?

Wayne Newton: “I play 13 different instruments.  I played three by the time I was six or seven and then when we moved to Arizona, I picked up a couple more doing the television show. Then, when I went to Las Vegas, doing six shows a night, six days a week for years, I kept adding instruments, in order to give me some vocal relief, because you just can’t sing that much, that is how I ended up playing 13 instruments.  I still can’t read music and to date we have released 165 albums and 17 in the top 20 songs.

Newton played the electrical guitar and sung a Kris Kristofferson tune “Help me Make it Through the Night” and later in the show, he played his violin.  He is quite an entertainer.

His family is the most important thing to him, his two beautiful girls and his beautiful wife Kathleen.  My profession standpoint is that he had the opportunity to travel throughout the world and to be entertaining the men and women in the armed forces.

He said that Saving Private Ryan reminded him how long it had been since we had thanked the men and women in uniform and their families.  (thunderous applause).

He asked all those in the audience to stand up who had served in the military or who are currently servicing and for all police and fireman to stand and there were several that stood up.  How proud we were of all of them, especially my camera man, Steve who was a retired firefighter/fire marshal.

There were more questions asked, so if you would like to find out more interesting facts and see wonderful footage of Wayne Newton throughout his career, take a drive north to Las Vegas to see this once in a lifetime show.

There are only a few more show left this month. So checkout his website to get you tickets now.  www.WayneNewton.com

Recognized worldwide as “Mr. Las Vegas,” entertainer Wayne Newton is known for his signature song, “Danke Schoen,” plus many more hit singles including “Daddy, Don’t You Walk So Fast,” “Red Roses For a Blue Lady” and “Years.” He has recorded and released 165 albums to date. In a business that is often volatile and marked by short-lived successes, Wayne has instead thrived through the years to perform live to more than 40 million people. He has performed over 25,000 shows in Las Vegas alone. Without reading a note of music, he plays 13 instruments. He exemplifies the talent, glamour and energy that is Las Vegas. Having established himself as an accomplished actor—both on television and in movies such as Vegas Vacation and the James Bond-franchise License to Kill—Wayne is getting more attention than ever.

Born in rural Virginia, Wayne knew from a young age he wanted to entertain. At age six, he had his first radio show. At age nine he had his first television show in Phoenix, Ariz., where his family had moved due to Wayne’s asthma. Starting at the bright young age of 15, Mr. Las Vegas performed six shows a night, six nights a week, at the Fremont Hotel & Casino. It was obvious Wayne simply worked harder and dug deeper than anyone out there, sizing up audiences as he went, and tailoring shows to fit their moods.

His heartfelt patriotism is at Wayne Newton’s very core. He has entertained troops in every major confrontation our country has been in since Vietnam … and he was there twice. One of Wayne’s highest honors was announced in October 2000, when Bob Hope and the USO passed the torch naming him the Chairman of the USO Celebrity Circle. From 2001 through 2004, Wayne took 16 USO tours overseas. Wayne was the first performer to entertain our troops in Afghanistan and Iraq.

President George W. Bush honored Wayne at a private White House reception in 2001, thanking him for his patriotism. The U.S. Department of Defense bestowed upon Wayne its highest civilian award for being the only American entertainer to perform in all of these places, something Wayne is truly proud of. “Entertaining our men and women of the armed forces overseas has been one of the highlights of my life,” says Wayne on his dedication to service men and women.

The people of Las Vegas and the State of Nevada have given him their highest honors. He is one of only two people in Las Vegas history to receive the city’s Medal of Honor. He has been named Ambassador of Goodwill for the state of Nevada. McCarran International Airport’s main thoroughfare was renamed “Wayne Newton Boulevard.” It’s just a few miles from Casa de Shenandoah.

Wayne was also named one of the top three entertainers of the century in Nevada and worldwide, along with Frank Sinatra and Elvis. There is a Wayne Newton star on the Hollywood Walk of Fame, and he was bestowed the very first star on the Las Vegas Walk of Fame. As Merv Griffin once said, “Las Vegas without Wayne Newton is like Disneyland without Mickey Mouse.”