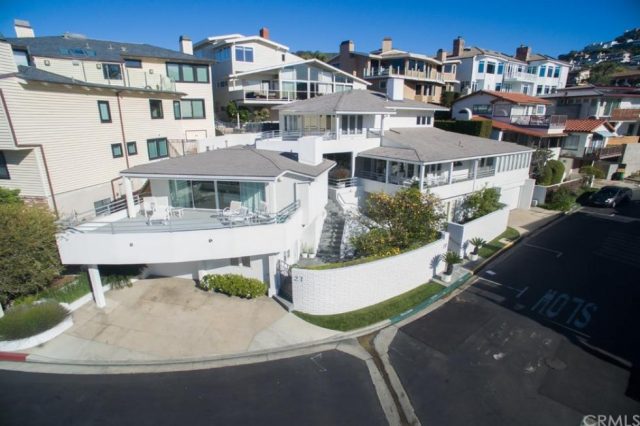 “A Beach Deal From Warren Buffett”

In 1971, Warren Buffett bought a contemporary-style beach home in Laguna Beach for $150,000 – long before prices on the Southern California Pacific Coast began to skyrocket. He has had the six-bedroom home listed for over a year at $11 million, but recently cut the price by $3.1 million, now asking $7.9 million.

Known for his Midas Touch in choosing investments and a net worth of almost $85 billion, Buffett is a bit of a cheapskate when it comes to his lifestyle. He refrains from using popular technology, frequents  McDonalds for breakfast and drives used cars that he holds onto for years. He still lives in a home that he purchased in 1958 for $31,500 in Omaha, Nebraska – the city where he was born.

Buffett did make one splurge in real estate. While married to his first wife, Susan Thompson, he bought a beach house in Laguna Beach where the family of five would vacation and spend holidays. He purchased it for $150,000, overlooking the Pacific and only a short walk to the sandy beach. Since Susan died in 2004, Warren has not made much use of the home and put it on the market in early 2017.

At 3,588 square feet, the Laguna Beach house is much different than Warren’s traditional Omaha home which is now worth about $600,000. His California home is very contemporary with six bedrooms and seven baths, big windows, sculptured ceilings and recessed lighting to spotlight the home’s modern art, a long fireplace and multiple built-ins. All rooms, including the large family room and decks, have ocean and beach views and the rock cliffs spilling onto the beach of Emerald Bay.

One of California’s most historic homes, the Peabody Estate, is for sale. Perched on a peak at the tip of Montecito with staggering 360-degree views and several acres of gardens, it has been listed for $40 million.

Over a century ago, Frederick Forrest Peabody was one of the country’s wealthiest men. He was a partner at Cluett, Peabody and Co., the manufacturer of the popular Arrow shirts that were  responsible for the big change in men’s fashion from rounded shirt collars to the pointed collar. Their advertising campaigns that focused on the debonair depiction of The Arrow Man reached coast to coast and became so popular that people began sending fan mail.

Peabody’s wealth grew along with Arrow shirt sales. In 1913, construction began on his mansion located on one of the prime building sites in California – 11 acres on a knoll in Santa Barbara at the tip end of Montecito with uninterrupted views of the Pacific Ocean, the Santa Barbara city lights and the Santa Ynez mountains. Peabody died in 1927 and the property later became the headquarters for the Center for the Study of Democratic Institutions, a think tank where world leaders and scholars would gather to discuss societal problems. Attendees included John F. Kennedy, Martin Luther King, Jr. and Henry Kissinger.

New owners, former executives of Amway, purchased the estate in 1999 and began a three-year massive restoration of the 22,729-square-foot structure, bringing the house well into the 21st century and restoring the equally impressive grounds. Now with seven bedrooms and twenty baths, the mansion encompasses large formal rooms for entertaining, a huge kitchen with fireplace, ceiling beams of salvaged blue pine from a pre-WWII Canadian airplane hangar, marble countertops, dining area and family room. The master suite has an 18th-century French limestone fireplace, antique crystal chandelier and his-and-her closets and bathrooms. Also included is a beauty salon, fitness center, wine room, and a reception room/library paneled in French oak from the William Randolph Hearst mansion. The estate also includes a two-bedroom, two-bath guest house, a pool and cabana with sauna and two baths, four named terraces – each for a different view, an orchid house/art studio and a spectacular terraced rose garden containing over 500 rose bushes.

Now ready to march into the next hundred years, the mansion is priced at $40 million, listed by Stefan Pommepuy, Santiago Arana and Mauricio Umansky of The Agency, Beverly Hills.