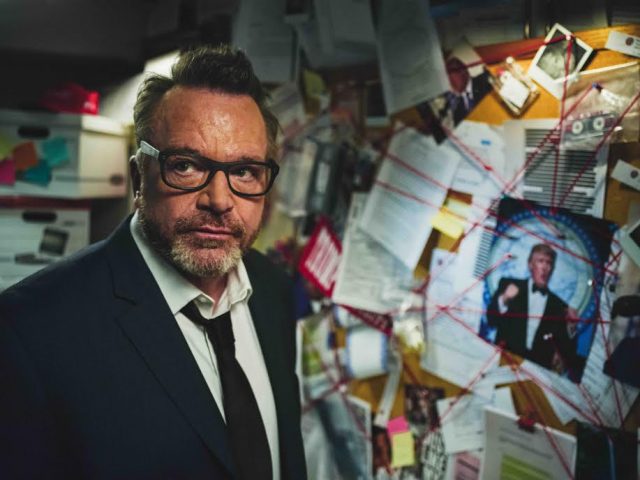 July 25, 2018, Brooklyn, NY – VICELAND has set the premiere for its anticipated series “THE HUNT FOR THE TRUMP TAPES with TOM ARNOLD” with a double-episode premiere slated for Tuesday, September 18 at 10:30PM.

“All the President’s Men” meets “Curb Your Enthusiasm” as comedian/actor Tom Arnold takes his addled activism off Twitter into real life and tries his hand at “citizen journalism.” Using his network of connections, Arnold searches for the truth behind the many rumored, potentially damaging recordings of President Donald Trump.

As Arnold’s potentially quixotic search among the powerful people who may have or know of these tapes unfolds, the series becomes a funhouse mirror snapshot of our current media and political landscape.

Arnold comes to the project with 35 years in the entertainment business, from stand-up comedy to sitcoms, films to philanthropy.  He has built an extensive network of people from the above-the-title superstars and top executives to rank-and-file crewmembers, and most recently, journalists.

The eight-episode series begins with Arnold’s appearance on The Howard Stern Show where he asks Stern to release his many hours of Trump interviews and follows Arnold as he meets with his deep network of show business connections including Arnold Schwarzenegger and Penn Jillette (both veterans of “The Celebrity Apprentice”), fellow comedian turned outspoken Twitter activist Judd Apatow, and longtime Trump opponent and target Rosie O’Donnell.  Arnold also taps into his surprising relationships with veteran investigative journalists like Jane Mayer of The New Yorker and the bestselling authors of “Russian Roulette” David Corn & Michael Isikoff as well as longtime Trump watcher, former NY Daily News columnist A.J. Benza. Arnold also sits down with people who have been close to Trump himself including former business associate Felix Sater and former White House Communications Director Anthony Scaramucci and finally documents the frenzy of attention around Arnold’s surprise meeting with Trump lawyer Michael Cohen earlier this summer in New York.

Arnold also mounts campaigns to pressure powerful Hollywood players like Mark Burnett (executive producer of “The Apprentice”), agent Ari Emmanuel (owner of the Miss Universe Pageant) and pressures American Media CEO David Pecker and TMZ’s Harvey Levin to release any recordings or information they may have.

While the show is undoubtedly comedic in tone, Arnold remains steadfast in his belief that not only do some of these tapes exist, but they matter and need to be seen and heard.

The network continues to maintain a secure website (www.viceland.com/tips) for any whistleblowers or sources to send leads or actual footage (all of which will be vetted and authenticated) to help Arnold on his quest for the truth.

For more information about VICELAND, its people and its programming:  Log on to VICELAND.COM/PRESS

Most TV channels are just a collection of shows – VICELAND is a collection of personal points-of-view. Everything at VICELAND has a reason to exist and a strong perspective. Our mission is to examine the world we live in, and explore the things that confuse us, make us curious, make us laugh, or awaken our sense of wonder.