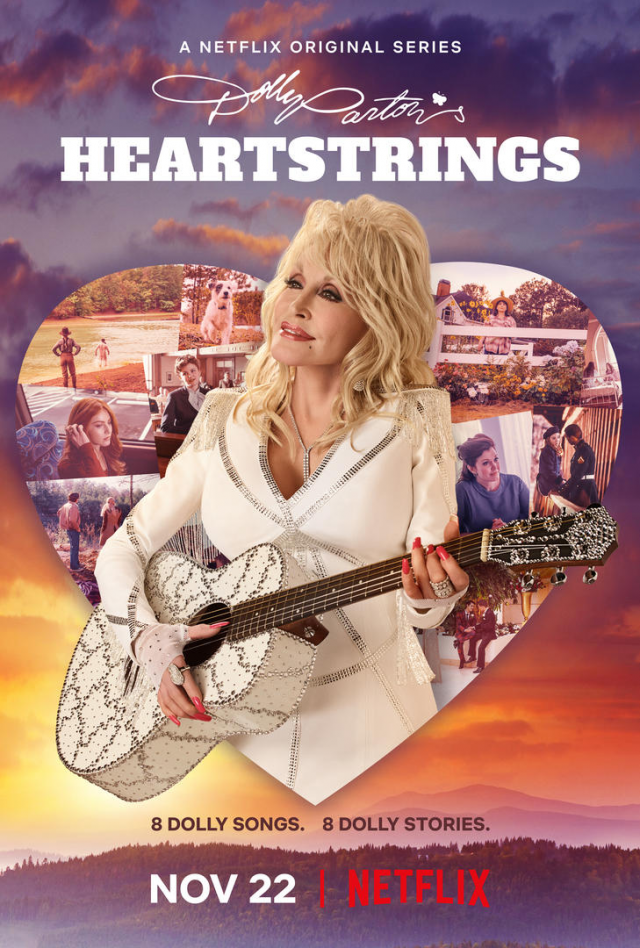 The Dolly music you love, the stories you’ve been waiting for. Dolly Parton’s Heartstrings is an anthology series that showcases the stories, memories, and inspirations behind her most beloved songs. New and classic Dolly music will score every episode. Each story will vary in tone, from love stories and inspirational tales to family dramas, westerns, and revenge comedies.

Episode Titles: These Old Bones, If I Had Wings, JJ Sneed, Jolene, Cracker Jack, Sugar Hill, Down From Dover, Two Doors Down.

SYNOPSIS: A big-city lawyer comes home to TN to convince an alleged “witch” (Old Bones) to sell her land to a mining company. She wrestles with her past and the future of the town.

If I Had Wings

SYNOPSIS: After receiving invitations to the 70th birthday party of their decades-long estranged father, three disparate siblings converge on a Mississippi farm where they test the bonds of blood and issues of faith, all to confront the sins of their father.

SYNOPSIS: In the 1880s, a feisty young woman trapped in a mundane existence dreams of more, until a seductive outlaw pulls her into the adventure of a lifetime

SYNOPSIS: Based on Dolly Parton’s Grammy award-winning classic, “Jolene” tells the story of an unexpected friendship between two very different women who find themselves part of the iconic love triangle, ultimately impacting each other’s lives in profound ways.

SYNOPSIS: Two stories — one past, one present — about the power of unconditional love between a girl and her dog, and that same girl, now grown, who questions what her life means and who she can truly count on when faced with her greatest fear.

SYNOPSIS: A married couple in their twilight embarks on a road trip back to the place where they first fell in love, along the way revisiting the history of their love story.

SYNOPSIS: After being shunned by her pious widowed father, a pregnant teenager finds support at a home for unwed mothers, where she hopes for the safe return, of the young man she loves, from the Vietnam War.

SYNOPSIS: A family’s lifetime of secrets come bursting out during a chaotic and comedic New Year’s Eve wedding weekend. Will they make it to witness the “I do’s” without killing one another?