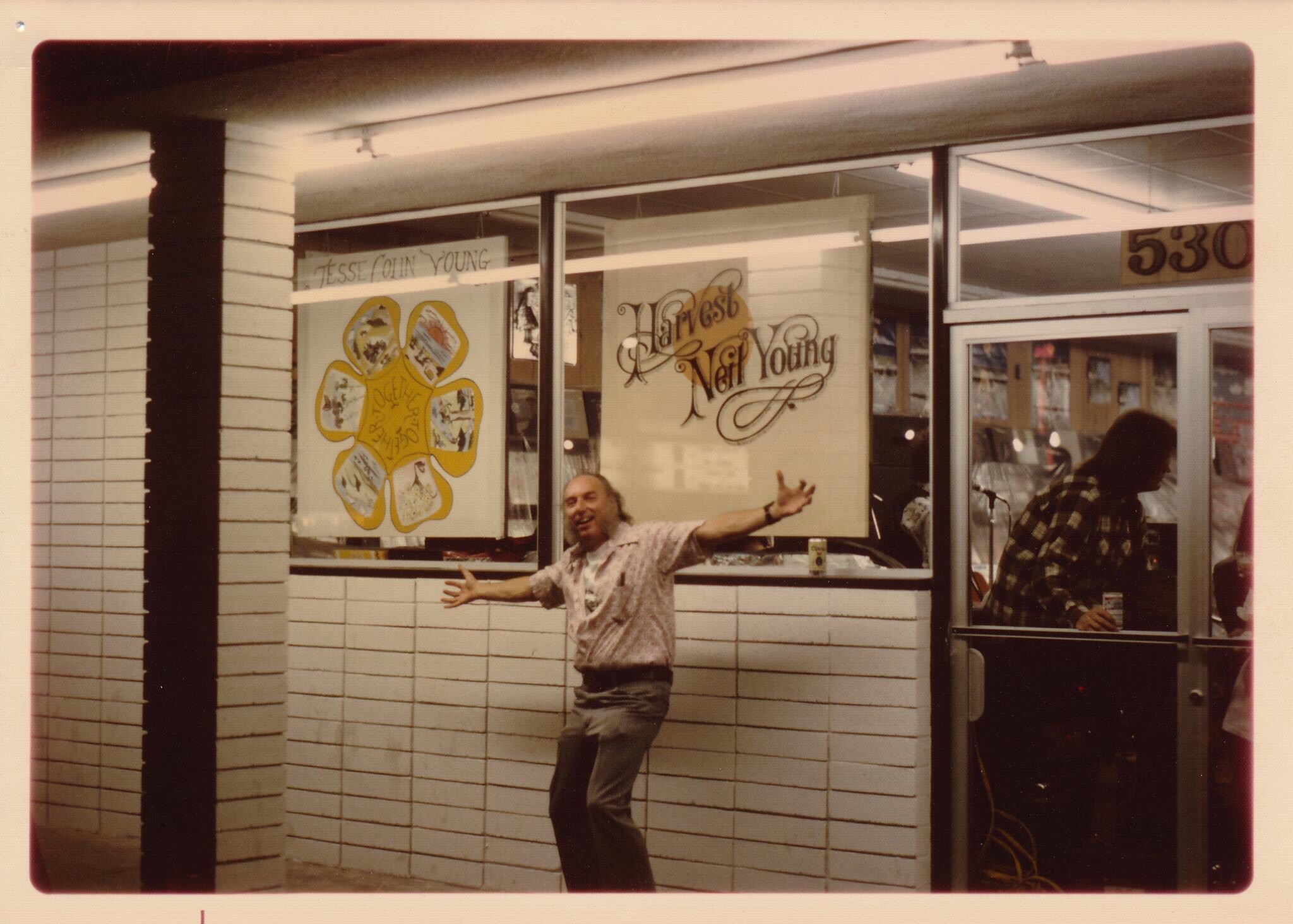 All good things must come to a past and while watching the Academy Awards with a drink of whiskey, the founding father of Tower Records had a massive heart attack and died. Another historic day of when the music died again for many of us Tower Records employees and fans of Russ Solomon. I never met Russ but I worked for him at the Costa Mesa location of Tower Records in a former skating rink at the narrow strange plot of land by a Del Taco by 17th Street and Newport Blvd. en route to the Balboa Peninsula. It was a store where one could be themselves, tattoos and all. One time a customer said to me, ‘where is your tattoo? I replied, ‘Not where you can see it’ To which he exclaimed, ‘Everyday is Halloween at Tower’. Actually everyday was Record Store day at Tower.
I have met and worked with so many ex music store friends who personally knew Russ as they were music buyers for labels and bands or former Tower employees.. I found out on Facebook today about Russ Solomon’s passing by my former boss from my Super D music distribution company, Lauren Watt, who announced her sadness in a post about his death. This man’s love of music gave so many music lovers a place to work and a place for music fans to get music. Yet it was so much more. Tower Records was a community center of sorts. One could get tickets for music and sport events through Ticketmaster at the Tower locations. We did Saturday morning on sales at 9am for just released concerts. It was a rite of passage to be in a cue with a coveted wristband to get the best spot in line for your favorite band’s upcoming show that could sell out in minutes. The Tower Records staff was all about customer service and we knew how to expedite the lines to quickly get as many people tickets as possible.
Russ grew an empire from simple origins of selling some records in a display at a Sacramento pharmacy. Ironically when the record store bankruptcy happened in 2006 right before Christmas, the Great American Group was buying up the stores not to preserve them but to obtain properties for future Walgreens Pharmacy locations. It must have been hard for Russ to see his dream diminish but oh what a wonderful journey it had spun.
Colin Hanks made a high fidelity spin of the early Tower Records origins with his rockumentary movie All Things Must Pass where the famous Sunset Strip Tower Records was resurrected in its glory for an after party for the film screening. I remember that location so well when I lived in North Hollywood while married to a bassist and he played the clubs on the strip. If there was a parking space available in the tiny lot, one had to stop and go in the record store. It is like seeing a short line at the Donut Man in Glendora, or a short line at In N Out Burger, you gotta stop. Being at the Sunset Store was a very crowded shop of rows and rows of boxes of the latest releases. One couldn’t leave empty handed. All these memories become of one dreamer who dared. Thank you Russ. Please create good vibrations in Rock N Roll Heaven by opening up a music shop of sorts. The music tribe is waiting for you with open arms. A music angel is home to rest.