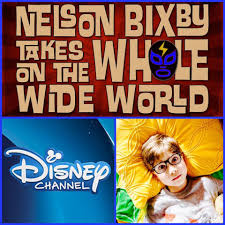 Hollywood, CA – Top Rebel Productions is proud to announce the release of the coming-of-age action-comedy “NELSON BIXBY TAKES ON THE WHOLE WIDE WORLD“ as part of The Disney Channel’s collaboration with new short-form content creators; it is now available worldwide and for free on The Disney Channel online services and their YouTube destination.

This micromovie marks a departure for Top Rebel Productions – a company co-founded by Freddy Rodriguez, Francisco Lorite (“Nelson Bixby” writer-director) & Bill Winett, and the slate of genre films & TV it has been developing.

Part fable, part superhero tale with a Latin twist, “Nelson Bixby” tells the story of how the ghost of a famous Mexican wrestler teaches a shy 11-year-old boy to find his own “hero” within. Written-directed by Francisco Lorite, produced by renowned film producer Deborah Del Prete (“Green Street Hooligans”, “The Spirit”, “Ender’s Game”, etc.) along with Bill Winett, executive-produced by Freddy Rodriguez,         and associate-produced by Daryn Simons & Annet McCroskey, the micromovie          is already garnering a tremendous response from kids around the world who have embraced Nelson and his new –very odd– mentor, “El Niño!”

“Nelson Bixby” writer-director Francisco Lorite says: “Working with The Disney Channel to create this micromovie was a completely unexpected opportunity for me and was a very happy experience. We were fortunate to find such an inventive cast to inhabit the characters, specially the two main roles; being able to make one of the leads Latin and a Spanish-speaker was an added (meaningful) bonus for me.”

This fall, Top Rebel Productions will also release “MEDIATION” online; the dark-comedy short film about a divorce mediation that spirals way out of control has had a very successful festival career and is a multiple award-winner.

For more information go to: www.TopRebelProductions.com