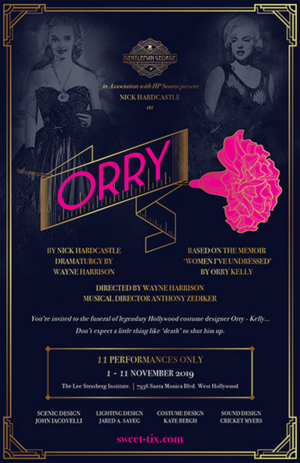 West Hollywood, CA (The Hollywood Times) 11/5/2019 The Hollywood Times was invited to cover The Australians in Film’s annual award dinner a few weeks back, during which Naomi Watts was given the prestigious Orry-Kelly Award for her work. My first thought when I saw the press release – possibly your thought as well – was, “Who is Orry-Kelly and why is his name on an Australian film award?” Aussie TV star Nick Hardcastle answers that question in Orry, an inventive show that manages to combine Golden Age of Hollywood documentary, intimate memoir, vaudeville and an art gallery on one small stage. Oh, it’s also a funeral.

You might not recognize Orry-Kelly’s name, but you would recognize his work in a heartbeat. Those incredible outfits Marilyn Monroe, Tony Curtis and Jack Lemmon wore in Some Like It Hot? That was Orry-Kelly. He won an Oscar for his work (and infamously said Curtis’s butt was cuter than Monroe’s.)

He also put Gene Kelly in that tight t-shirt for An American in Paris (another Oscar), and dressed everyone from Katherine Hepburn and Bette Davis to Natalie Wood and Jane Fonda. He put Ingrid Bergman in tweed for Casablanca and Gloria Grahame in fringe for Oklahoma.

If all this sounds like great material for a book – yes, he wrote one. He called it Women I’ve Undressed and it so scandalized then-conservative Hollywood that it wasn’t published until 51 years after his death. Believe it or not, a grandniece back in Australia found the manuscript in pillowcase in the back of a closet. Hardcastle picked up the rights in 2017, and plans to take Orry-Kelly’s story on the road in his not-exactly-one-man-show. We caught it in previews at the Lee Strasberg Theatre, where it runs through November 11.

Orry George Kelly – he invented “Orry-Kelly” when he came to Hollywood – moved from his small Australian hometown to New York City in 1923, rooming in the same hotel as George Burns, Gracie Allen and Jack Benny. But the new friend he cared most about was a young stilt-walker named Archie Leach. “Heaven on a stick,” Orry called him. Cary Grant, we call him. Their long, on-again-off-again relationship forms the heart of the play.

The frame of the play is Orry-Kelly’s 1964 funeral at Forest Lawn Memorial Park. The audience are mourners, Warner Brothers’ Jack Warner gives a videotaped oration, the pallbearers are Hollywood royalty… and Orry-Kelly just can’t help but jump out of his coffin to kibitz. Aided only by a piano player (Anthony Zediker) and his imaginary friend Bijou (Danielle Heaton), Orry-Kelly proceeds to recount his life story in song, dance, film clips, puppetry (really), the occasional magic trick, and an entirely winning sense of humor. Picture the world’s best dinner guest holding court for 90 minutes.

Orry-Kelly was unabashedly himself at a time when gay men in the entertainment industry were expected to stay firmly in the closet. “You should only ever be ashamed of being ashamed,” his friend Fanny Brice would tell him, and it was a motto he lived by. His other motto was “avoid glitter and gossip,” but he apparently didn’t live by that one at all.

Hardcastle not only does a journeyman’s job handling an hour and a half of non-stop talking, singing and dancing, but he has curated a wonderful art exhibit that becomes part of the show. Orry-Kelly left a legacy of costume designs, hand-painted fabrics, murals, photographs and more, much of it preserved by the Shubert Archive and Australian Film Commission.

This is an old-fashioned entertainment, but in no way stuffy or outdated. The celebrity-studded opening night audience was delighted, jumping from their seats for a standing ovation. Orry-Kelly is long overdue for his close-up, and Nick Hardcastle is just the man to channel his spirit.