Los Angeles, CA (The Hollywood Times) 12/22/17 – “When he looks at me, he does not know – how – I am incomplete. He sees me… as I am.” The Shape of Water is the film to watch out for this awards season. This movie has taken love stories to a whole new level. 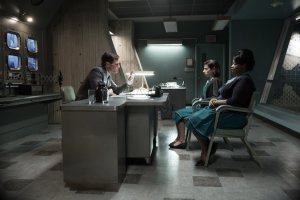 The film’s stars include Sally Hawkins, Octavia Spencer, Michael Shannon, and Michael Stuhlbarg. There are no words, pun intended, to describe Hawkins’ extraordinary performance in this film. Without words, Hawkins’ was able to convey such deep emotions for all the people she interacted with: love, passion, joy, sadness, fear, disgust, etc.

Hawkins’ character, Elisa Esposito, is a mute who works at a research facility janitor in the 1960’s. One day while cleaning, Elisa discovered an unknown aquatic creature in one of the secured research labs. She was instantly captivated by this creature and it was, in its own way, love at first sight. Octavia Spencer, who plays Hawkins colleague and friend Zelda, delivered an exceptional performance per usual.

Spencer’s character works side-by-side and translates for Hawkins throughout the entire film and ends up being her partner in crime. Michael Shannon’s character, Richard Strickland, is the man who dragged the creature out of the water in South America and brought it back to the U.S. The natives in the Amazon worshipped this creature, so Strickland insisted that they take it apart and learn how it works; to weaponize the creature. However, Strickland’s true motives were out of hatred for the creature and he wanted to inflict pain upon it. Dr. Robert Hoffstetler, portrayed by Michael Stuhlbarg, was strongly against this because he saw the creature as beautiful and sacred. He also had witnessed the creature’s ability to feel emotions and communicate with humans; he watched Elisa and the creature form a loving bond as well as Elisa teach it the word “egg” in sign language. Eventually, the decision was made to tear it apart and research it. What were Elisa, Zelda and the Doctor going to do? They couldn’t let them kill the creature? So, they planned to break it out, but Strickland would be difficult to handle. Do Elisa and her friends get away with breaking the creature out? Does Elisa finally get the love she’s always dreamed of having? You’ll have to watch this phenomenal film to see the dramatic ending!