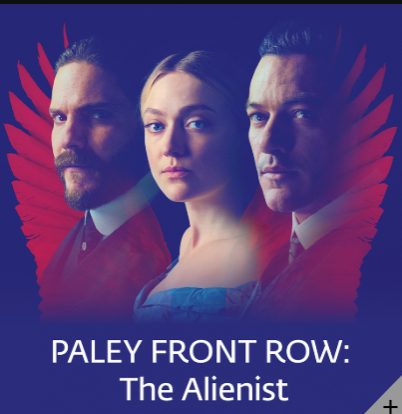 The Alienist: Angel of Darkness premieres Sunday, July 19 at 9:00 pm ET on TNT

New York, NY, July 14, 2020 – The Paley Center for Media today announced a new selection to its Paley Front Row Presented by Citi series: TNT’s The Alienist: Angel of Darkness: A Conversation with the Stars. The conversation will be available for view on the Paley Center’s YouTube channel starting July 17 at noon EST.

“We’re thrilled to add the highly anticipated sequel to The Alienist to our Paley Front Row Presented by Citi programming schedule,” said Maureen J. Reidy, the Paley Center’s President & CEO. “The Alienist: Angel of Darkness is a compelling story that follows a young woman whose fearlessness and determination is certain to resonate with today’s television audiences.”

The Alienist: Angel of Darkness is the sequel to the 2018 Emmy Award-winning and Golden Globe-nominated series. Having opened her own private detective agency, Sara (Dakota Fanning) once again partners with Dr. Kreizler (Daniel Brühl), the formidable alienist, and John Moore (Luke Evans), now a New York Times reporter, to find the Spanish Consular’s kidnapped infant daughter. Their investigation leads them down a sinister path of murder and deceit, heading towards a dangerous and elusive killer. The series shines a light on the provocative issues of the era – the corruption of institutions, income inequality, yellow press sensationalism, and the role of women in society. The three main stars will unite for this insiders look at the series.

The Alienist: Angel of Darkness premieres Sunday, July 19 at 9:00 pm ET on TNT.

Paley Front Row Presented by Citi, is a new way to enjoy the behind-the-scenes stories of today’s top shows from the comfort of home.

The public can view these programs for free by subscribing to the Paley Center’s YouTube channel.

The Paley Center for Media is a 501(c)(3) nonprofit organization that leads the discussion about the cultural, creative, and social significance of television, radio, and emerging platforms, drawing upon its curatorial expertise, an international collection, and close relationships with the media community. The general public can participate in Paley programs in both New York and Los Angeles that explore and celebrate the creativity, the innovations, the personalities, and the leaders who are shaping media. They can also access the Paley Center’s permanent media collection, which contains over 160,000 television and radio programs and advertisements. Through the global programs of its Media Council and International Council, the Paley Center also serves as a neutral setting where media professionals can engage in discussion and debate about the evolving media landscape. Previously known as The Museum of Television & Radio, the Paley Center was founded in 1975 by William S. Paley, a pioneering innovator in the industry. For more information, please visit paleycenter.org.