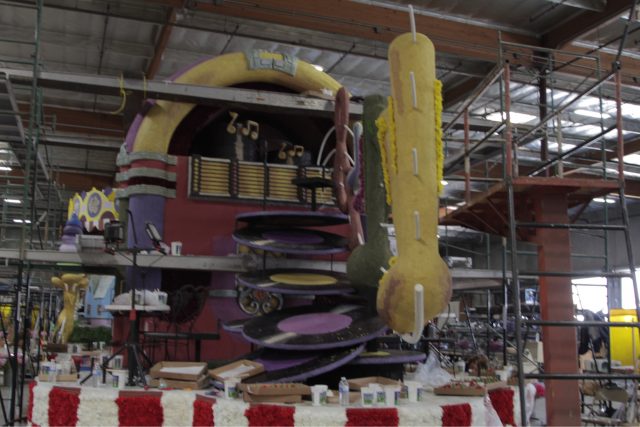 About 15 minutes away from the famed stretch of Orange Grove and Colorado Blvd where the 130th Tournament of Roses will take place only 24 hours from now, the Phoenix Decorating Barn houses the Kiwanis International Float.  This global network of clubs dedicated to serving the youth of the world has brought in a small army of their young membership who embody the spirit of the ToR while representing the mission of Kiwanis.

Sitting with The Hollywood Times Bob talked about his legions of young volunteers who are helping to decorate not only their own float but assist others as well.  “We have an average of 500-1000 kids each day.  Some work two shifts, others just one.”  They come from clubs across the nation and world as Bob further explained.  “Last night I was working and a gentleman from Ohio came over and asked ‘Where do you guys get all these kids?’ I tell him, very simply, high schools.  Nearly all high schools have a Key Club.”  Bob also talked about their Circle K clubs for younger kids and Action Club for special needs youth.  All are contributing to the float this year as Bob proudly explains, “…they come out here and they’re very productive.  I think that’s one of our best programs we have.  Those young people are terrific.  They do everything we do.” 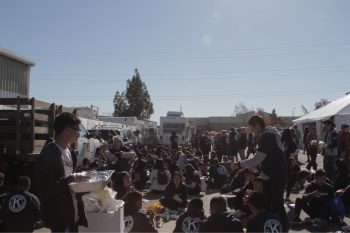 When asked why Kiwanis volunteers could be found assisting with the decoration of other floats, Bob beamed with pride.  “Sometimes we have so many that we’ll have kids sitting around with nothing to do.  So, we’ll ask Phoenix or the other float “crew-chiefs” what they need and give them some of ours to help them.  I think Phoenix is quite happy to have us because we help keep things on schedule for them.”

Bob talked at length about how they’re able to manage such a large group of young volunteers.  “Our kids, by Kiwanis International requirement, must do 50 hours of community work.  So, this (decorating floats) is one way they accomplish that.  Through our programs the kids learn leadership skills and we find that we have less difficulty with our kids because of that.”  As Bob, other leaders among the Kiwanis, and Phoenix staff all mentioned, there are many rules and regulations when working on floats.  Decorators (of any age, not just kids) can be asked to leave for a violation of these rules.  But, as Bob explains, “You know, you’re always going to have things happen when working with kids.  But as Kiwanians, we’ve learned how to correct rather than judge or punish.”

When asked about anything that’s particularly special for this year’s Tournament of Roses, Bob said, “I think the theme (The Melody of Life).”  “Music and young people go together.  The bottom line at Kiwanis is our youth.  Music is important to them.  I think, as you’re growing, you identify with music and a lot of times music has a tremendous influence.  So, I think the theme is proper.  Kiwanis was created in 1915.  We are number one for sponsored youth.  Nobody really knows that, so we’ve got to get that out to the world.  It’s the love of the Rose Float and the participation in the Rose Float.  It’s a tremendous thing for Kiwanis.”