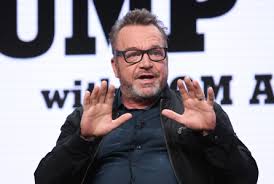 On THE HUNT FOR THE TRUMP TAPES, Tom Arnold will take his unfiltered activism off of Twitter and into real life.  And he starts his quest looking for the truth behind the many rumored, potentially damaging recordings of President Donald J. Trump.

With over 30 years in show business, multiple television shows, over 100 films, and years and years of charity work, Tom’s network of contacts is deep.  Guests on his show will include Arnold Schwarzenegger, Judd Apatow, Rosie O’Donnell, Jane Mayer, Michael Isikoff, David Corn, and Anthony Scaramucci (“The Mooch”).
Would tapes like these have any impact upon Trump supporters?  Tom Arnold doesn’t care!  He is going to do this until Trump resigns, believing the POTUS to be a “crazy person.”  “Since Helsinki, big things are breaking!” Arnold exclaimed.  “Anyway, it’s a comedy.”

Arnold does in fact know Donald Trump, having gone with him and wife Melania to the Playboy Mansion and some Oscar parties.  Arnold’s ex-wife, Roseanne Barr, has emerged as a Trump supporter.  And people always hope they “can get a thing” from the rich and powerful.

But Arnold has noticed that people keep “peeling off” the Trump administration in droves “because Donald Trump doesn’t give a shit about America.”  Arnold’s crusade is racing ahead of the official investigation Robert Mueller is currently conducting.
Nomi Leidner characterized Tom Arnold as an “active and courageous citizen” as well as a comedian who is using his social media platform in a way that “many people would be way too chicken to do.”  She assured the TCA audience that everything about the show was backed up legally. 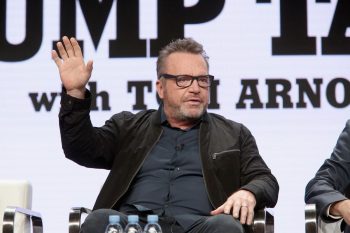 “We know legitimate journalists who know how to protect people, First Amendment, and that’s what’s most important,” said Tom Arnold.  So expect the Trump tapes to keep being hunted!  Trump can Tweet, and so can Tom.