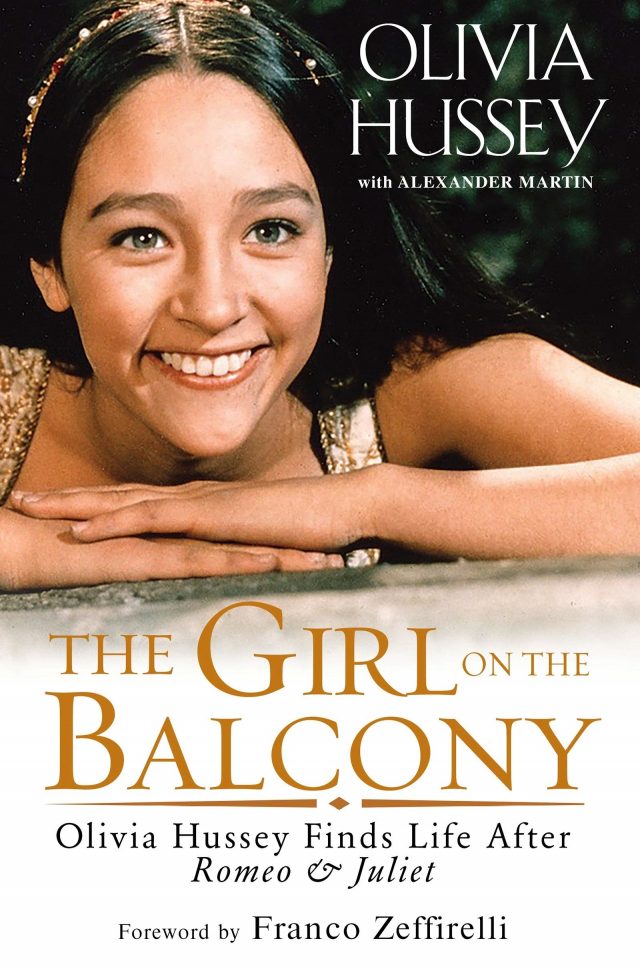 Hollywood, CA (The Hollywood Times) 11/21/18 – In 1968, Olivia Hussey became one of the most recognizable faces in the world when cast as Juliet in Franco Zeffirelli’s Romeo & Juliet. At 16, she was praised for her beauty and talent alongside Leonard Whiting’s Romeo – as one of the two leading discoveries created by Zeffirelli’s brilliant casting and direction. Hussey’s memoir – featuring a foreword by her star-making director Franco Zeffirelli – gives us a glimpse of the girl on the balcony but leaves the reader wishing for and wanting more.

Originally from Buenos Aires, Hussey came from a broken home and was raised by a single mother along with her younger brother in London. Shortly after their arrival, Hussey announced to her mother, “I think it’s time I started taking my career seriously.” She was eight-years-old but had known by age four that she wanted to be an actress. Their early years coming to the UK were difficult but her mother worked hard and allowed her daughter to go for her dreams. Romeo & Juliet gave her entre to the most exclusive of circles and she went on to play Mother Theresa and the Virgin Mary while losing out on other roles but she feels it was her destiny.

Hussey brings up being naïve throughout the book – that is co-authored by her son, Alexander Martin, with first husband Dino, eldest son of the Rat Pack’s Dean Martin.

Considered one of the It Girls of London’s swinging 60’s where Hussey was a part of the generational change that hit full force into the 70’s. She lived in the house where Sharon Tate was murdered and was beaten and raped by her ex-boyfriend – almost husband – Christopher Jones (Ryan’s Daughter) while both lived on the same grounds, then had an abortion as a result of that rape. She states, “He was sick, sick in his mind. It wasn’t his fault.” That was the last time that she saw Jones who died in 2014.

It’s a quick read into what her life was and is today throughout her three marriages, career hits and misses, health struggles and financial destruction that make Olivia Hussey’s autobiography a good read that could be so much greater.

She’s a courageous woman who has weathered some intensely difficult storms and by glossing over so much of the details of how she got better – leads the reader to assume it wasn’t so bad after all, at the end of the day. With quotes like, “I never felt afraid in the Manson house. All I felt was the sweetness of Sharon Tate.” Her journey of self-discovery path to self-discovery and meeting her guru are important to her yet her running themes of struggling with agoraphobia and insecurities make us wanting more or perhaps that’s her point.