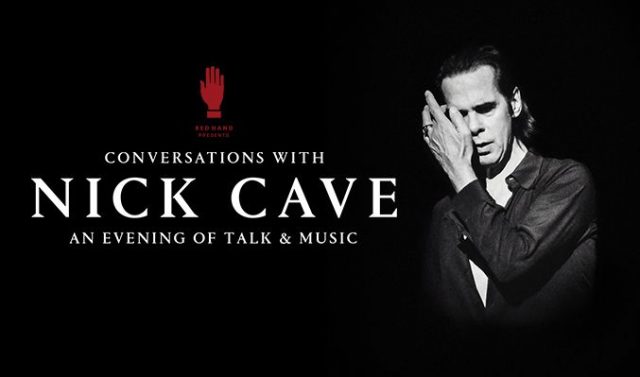 At the Walt Disney Concert Hall, ‘Conversations with Nick Cave: An Evening of Talk & Music’ is an intimate agreement etched between a singer-songwriter and his audience.

Los Angeles (The Hollywood Times) 10/21/2019 – “The essence of being human is that one does not seek perfection, that one is sometimes willing to commit sins for the sake of loyalty, that one does not push asceticism to the point where it makes friendly intercourse impossible, and that one is prepared in the end to be defeated and broken up by life, which is the inevitable price of fastening one’s love upon other human individuals.” — George Orwell

I know I should have written my review when I got home on October 15th or the next day, yet I could not. A profound experience takes time to digest, At the Walt Disney Concert Hall, ‘Conversations with Nick Cave: An Evening of Talk & Music’ is an interactive experience and exchange of music and meaning that is hard to encompass in words. Some critics refer to it as group therapy, but it is so much more than any reductive description. Intimate and extraordinary, bold and enlightening, funny and heartbreaking, redemptive and quietly forsaken, the evening is hard to embody in language. As I write these words, I can hear Nick Cave sitting behind me, urging me to try again, “one more time with feeling.”

Beyond being the lyrics to a song, One More Time With Feeling is a stark and painful documentary that captures the process of Nick Cave’s recording of The Skeleton Tree, an album he released with his band, The Bad Seeds. Why is the documentary glaring and raw to watch? Why is the nature of truly being human quietly forsaken? The simple answer is the fragility of life. For Nick Cave, such fragility became a haunting reality when his 15-year-old son Arthur fell off a cliff into the Ovingdean Gap near Brighton and died on July 14, 2015.

Ever since Arthur’s death and the subsequent shattering of everything he knew to be, Nick Cave, the singer-songwriter, has struggled valiantly to piece himself back together, renegotiating his life as a human being in this world. In the documentary, the trauma is much fresher with a “rubber” quality. Says Nick Cave, no matter how far away he stretches past the loss, eventually it snaps back and returns his consciousness to the darkest reality. At that time, Nick Cave had to remember to be kind because he’s so often swallowed whole when monstrous little memories are triggered by the most casual realities of each and every day. There is no escaping such loss.

Also, Nick Cave found himself having to negotiate the pity of strangers. At this point, even the loving condolences of friends are hard to take. There is no consolation and the narrative of the so-called “good” life has been fractured. The pieces are left behind. There is no particular logic to life or maybe only a terribly distressing logic of brokenness and loss, a kind of entropy that mortality makes inevitable.

In the documentary, when people tell Nick Cave or his other family members that Arthur continues to live on in their hearts, the singer is taken aback by the statement. Yes, he thinks, my son always will be in my heart, but he does not live there. He does not live anywhere anymore. He is gone and that is a fact. When people skirt that fact in the guise of consolation, it inflames the damage.

In contrast to the movie, ‘Conversations with Nick Cave: An Evening of Talk & Music’ is much further along in the healing process. The motivation for these talks comes from his survival instinct. The loss will never be settled, but Nick Cave describes how the rubber band stretches much farther now. The freedom of creative expression provides extended relief, and there has been a surrender. In response to a question about how things have shifted over time, Nick Cave says, “I have given myself over to the unknown, to what is beyond truth through a dedication to uncertainty.”

When asked what he fears, Nick Cave says that he does not fear his own death, but he deeply fears the loss of those he loves. He must fight back the fear whenever he sees them leave the house and go off into what can morph into a threatening unknown. He says, “Mostly I am afraid of how fragile life really is and how quickly it can disappear.”

Perhaps the most profound moment of the night came when someone asks Nick Cave if he feels the death of his son has turned him into a better person. At first glance, the question feels invasive and like a violation. Nick Cave thinks for a moment, however, then responds, “Definitely.” He appears grateful to have been asked the question.

Instead, Nick Cave expresses how the terrible beauty behind trauma is a very strange dynamic; you experience life in a way you can’t imagine before the trauma happens. You realize there is a breaking up of all human lives that is so completely a normal part of existence. In a strange and weird reverberation, the trauma becomes a source of strength. The worst thing has now happened–so what else can happen? There is a power in the traumatic experience upon the realization that we are all part of a great river of suffering that is the very nature of mortality.

When else does this happen on a night out? Where else is such honesty offered? Nick Cave does not ask for anything beyond the questions being asked and a straightforward interaction with his audience. What he provides in response is devastatingly authentic and wholly sublime. I’m not sure what else needs to be said. In fact, talking about it through the metaphysics of presence because I actually am writing about it with no one present almost feels like another violation. You need to experience Nick Cave live and in person. You need to be there.

And you can be there right now in a somewhat displaced manner. Nick Cave started a website in September of 2018 called The Red Hand Files. He allows visitors to the site to submit questions, and he does his best to answer some of them. To this day, he has provided over sixty-six answers to a wide variety of questions. It is worth checking out. 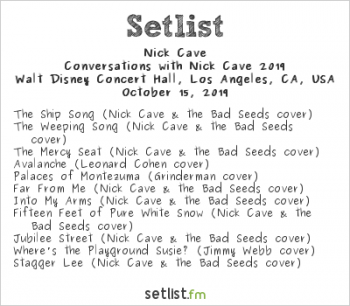