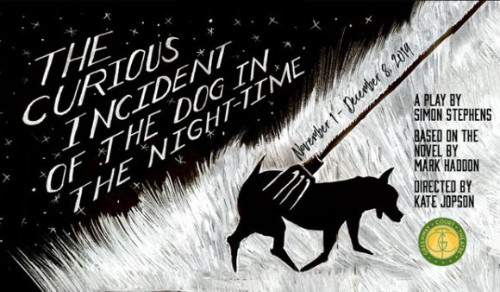 Greenway Arts Alliance is pleased to present the Tony and Olivier Award-winning play THE CURIOUS INCIDENT OF THE DOG IN THE NIGHT-TIME by Simon Stephens.  The play is based on the novel by Mark Haddon and directed by Kate Jopson.  It takes place in 1998 in and around the town of Swindon, England.

Actor Iain Kohn plays Christopher, a 15-year-old boy who attempts to solve the murder of his neighbor’s dog, Wellington.  Christopher’s crime-solving abilities are both limited and enhanced by the fact that he has Asperger’s Syndrome.  Amazingly, Iain Kohn shares this baffling condition with Christopher and convincingly allows you to inhabit his unique mind during every scene where he takes center stage.

Though Christopher has extraordinary analytical and mathematical abilities, he cannot interact easily with people.  Indeed, he is often afraid of them!

As the production underscores very creatively, Christopher is prone to sensory overload and cannot understand figurative or nonverbal language.  Common metaphors such as “apple of my eye” that are casually tossed about by most others with ease go completely over his head, and he only dimly realizes that “people do a lot of talking without using words.”

The play gradually turns into a journey of self-discovery as the Sherlock Holmesian “curious incident” brings Christopher much closer to home than he expects.  The resulting human drama grounds his inquiries about the dead dog.

Detective stories are the only form of fiction that Christopher likes–and he ends up writing one of his own!  He also triumphantly demonstrates the solution to his favorite math problem with the help of the entire cast at the end of the play.  His accomplishments give him hope for a happier future.

The people closest to Christopher are his teacher (Kacie Rogers), father (Michael Yurchak), mother (Joanna Strapp), and a few neighbors (Tristan Cunningham, Abe Martell, and Denise Moses).  The parents’ marriage is badly strained by the challenges of raising Christopher, but in the end both are able to support their son’s academic success and greater social integration.

Author Mark Haddon wrote on his blog that “[This] is not a book about Asperger’s. . .if anything it’s a novel about difference, about being an outsider, about seeing the world in a surprising and revealing way.  The book is not about any specific disorder.”  The Evening Standard in London called the play “a beautiful, eloquent, dazzlingly inventive show about the wonders of life.” 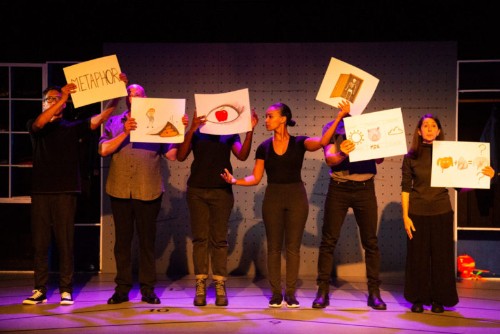