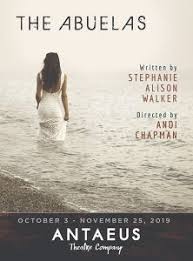 Written Stephanie Alison Walker/directed by Andi Chapman/Kiki & David Gindler is at the Antaeus Theatre thru November 25, 2019

This well-acted ensemble gives rise to the story of a woman discovering that she is a child of the Argentina’s 1976-1983 Dirty War. The military junta-General Videla led government in a ruthlessly attempts to quashed, even imagined, opposition.

In the first six months of Videlas rule average of 30 abductions a day gave rise to the term “desaparecidos” During the Dirty Wars the approximately 30,000 people were tortured and killed through state-sponsored terrorism.

Among those detained and tortured and killed were young pregnant women. The junta set up makeshift maternity wards where these women were forced to undergo Caesarean sections of/and given serums to accelerate birth.  The babies were given to “politically acceptable” parents. The group Abuelas formed to find the living children, the taken ones.

THE ABUELAS its relatable humanity., flawed relationships under the most atypical circumstances.

The story isn’t common knowledge here, even though the play begins in contemporary Chicago, we suspect that all this information will soon become relevant.

Argentine actress, Luisina Quarleri, totally inhabits the beautiful Gabriel, cellist with the Chicago Symphony,  the portrayal is good. The writer fails the character when she requires the actress to awkwardly pantomime playing the cello as well as play a few notes live. This falls flat suggesting a detachment  that Quarleri does not give Gabriel.

Her husband, Marty (“Castle” actor Seamus Dever), an architect, live in a high-rise overlooking Lake Michigan (an artsy, spacious apartment set-designed by Edward E. Haynes Jr  has step areas in  unexpected places, that set you in mind of how rocky relationships can be.

Gabriela’s mother, Soledad, played a dramaticly by Denise Blasor, is visiting from Buenos Aires. a sometime passionate, overbearing, all the times manipulative force of nature not quite an agreeable or welcomed, presence in Marty and Gabriela’s unevenly balanced lives. The couple has an infant child and a history of marital problems.

Irene Di Bari plays Carolina, Gabriela’s biological grandmother of whom she has been unaware; and David DeSantos plays César, the forensic anthropologist who brings Gabriela and Carolina together at a birthday celebration for Soledad.

The cast is talented and believable.

On the occasion of Soledad’s birthday, she has invited Cézar, a charming Argentinean she just met at church to join the birthday dinner Marty has been preparing for her. David DeSantos makes his presence known with his strong male projecting voice as Cézar, a forensic investigator. Cézar brought along an uninvited (very odd) guest, Carolina, whose identify and purpose takes a while to reveal itself. Irene De Bari gives believable to this curiously mysterious Carolina. The direction allows hesitation in the actions of Carolina. This allows us to feel the tension that is coming.

The grandmothers’ (Carolina) search for their stolen grandchildren has both restored and uprooted the lives of hundreds of adults who grew up unaware of their violent beginnings; that they were not the biological offspring of the people (Soledad) who raised them, but of women who were murdered after giving birth.

Gabriela’s acceptance of Carolina and rejection of Soledad unfolds as a fait accompli. The writing attempts to acknowledge the emotional turmoil of the situation without truly exploring it. Director Andi Chapman seems intent on avoiding the whole thing collapsing into soap opera

Who is Carolina? Did her friends and family in Argentina support her action?  If so, why would she fly to Chicago with no plan of how she will approach Gabriela? What choices did she make along the way ?

César’s origin as a child of the disappeared is also presented as a straightforward story of truth vanquishing evil and lies. Mr. DeSantos is persuasive, and he exudes a soulful sense of emotional struggle come before?