Hollywood, CA (The Hollywood Times) 12/3/19 – All of Hollywood convened for the year-end parade to end all parades. Sunday was my second time visiting the beloved event. Thousands attended.

If you missed it, don’t despair the parade will air on The CW as a two-hour primetime special on Friday, December 13th from 8 – 10 PM.

Wrap up in a cozy blanket with a cup of hot chocolate, and enjoy watching the broadcast with friends or family. Christmas activities, music, and celebrations are necessities for a complete Christmas holiday.

The parade lineup includes festive music and dance performances, parade floats, bands, balloons, and more. Its history is rich and full of charming details; It all starts with actress Jeannette Loff in a genuine reindeer-pulled sleigh on 1928 Hollywood Blvd. when the Hollywood Christmas began. In those days, it was called the ‘Santa Claus Lane parade’.  “Even though the parade started in 1928, it was dark for three years during wartime from 1942 – 1944, when there wasn’t a parade” says Steve Moyer, publicist for the Parade.  In 1946, Gene Autry heard the children in the crowd yelling-“Here comes Santa Claus!  Here comes Santa Claus!” when riding his horse into the parade, which inspired him to write the beloved and classic Christmas song, “Here comes Santa Claus.”

Celebrities attended this year’s very busy red carpet, photographers took pictures, and actors and singers did interviews. Laura McKenzie and Erik Estrada, famed for his role as “Ponch” in the 80’s cop drama, CHiPS, hosted the event this year. They were both interviewed by the Hollywood Times together on the red carpet. They said they’re back at the parade after attending a decade of previous parades. “This is our tenth year!” exclaimed Estrada. “Every year, we get to do one a year,” he laughed.

The two hosts said they were really happy to be introducing Mario Lopez and his family as Grand Marshals, and presenting rock legend Bret Michaels with a humanitarian award for his work with his Life Rocks Foundation, which raises money and awareness for those with Diabetes and other health challenges.“Every year, we get to do one a year,” he laughed.

The two hosts said they were really happy to be introducing Mario Lopez as Grand Marshall, and presenting rock legend Bret Michaels with a humanitarian award.  “It’s going to be wonderful,” Estrada said. “It’s going to be a great time.”  “We’re also here supporting the Marines Toys for Tots,” added McKenzie.  “So, Merry Christmas!” 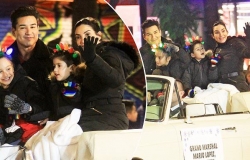 Elizabeth Stanton was the celebrity guest host. Her publicist, Michael Levine, told us she is a travel guru. She shared with The Hollywood Times that the last places she traveled to were rather exotic.

“We did India, we did Japan, we did Sweden and Germany,” Stanton told THT. “I’m very grateful and fortunate to be able to be on my show traveling. And I really love what I do.”

Buca Di Beppo, incidentally, was responsible for the small army of elf balloons, who merrily made their way down Hollywood Blvd. We’re already looking forward to seeing them next year.