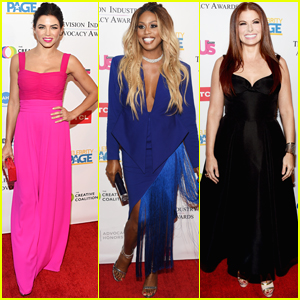 Los Angeles, CA (The Hollywood Times) 9/19/18 – Television’s big moment happened over the weekend, and if you weren’t at Sofitel in Beverly Hills, you missed a large chunk of the action.  Both the fourth annual Television Industry Advocacy Awards, and the Celebrity Page TV pre-Emmy party were held there, back-to-back.

Prady, a co-creator and writer for “The Big Bang Theory,” was one of the first on the carpet. He said there are many reasons the Advocacy Awards are important to the industry.  “It’s a wonderful thing to call attention to how people in our industry are active members of the community in which they live and participate,” Prady told THT.  “And I think that it’s important for us to have the chance to talk about some of our work, as opposed to our creative work, which you may know already.” 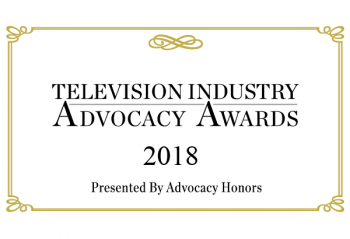 Prady’s creative work is, indeed well-known.  Using his celebrity gravitas, he created The Big Bang Theory Scholarship with Chuck Lorre.  The scholarship was launched at UCLA in 2015 in order to promote science and education.

Prady’s honor was presented by Lea Thompson, whom he deemed “an old friend.”  “I’m so glad that she’s here tonight,” he said.  Thompson is currently gearing up for the release of the modern adaptation of “Little Women,” in which she plays feminist matriarch Marmee, with a Los Angeles premiere to be held Monday.

The carpet was a mad cap, TV-world adventure—Jenna Dewan in a hot-pink ensemble surprised reporters, as did AnnaLynn McCord of “Nip/Tuck and “Let’s Get Physical,” in a stunning, sleek yellow gown.  LaVerne Cox of “Orange is the New Black” made an appearance on the carpet as well, flashing her inimitable smile for cameras.

Inside the awards, it was down to the business of honoring the more weighty work done in their personal time.

Wendi McLevon-Covey of “The Goldbergs,” wearing a full tuxedo, was the portrait of womanly success, with honors going to her for her work with WriteGirl, a nonprofit that matches teen girls with professional writers in Los Angeles as mentors.  As a result, these girls are empowered with creativity, critical thinking, and leadership skills.

Sela Ward was honored for her work with Hope Village, a charity that aims to keep siblings together in foster care.  Madchen Amick of “Riverdale” and “Twin Peaks” was recognized for being an advocate for The National Alliance on Mental illness. Amick joined the cause after her 26-year-old son was diagnosed with Bipolar disorder, and the Alliance was there to help her navigate the challenges of living with a family member who suffers from a mental disorder.

Debra Messing of the recently revived “Will and Grace” works with nonprofit Population Services International, which promotes universal health coverage “through innovative and sustainable solutions that meet the actual needs of people in developing countries.”  The organization focuses on 5 healthcare areas: Reproductive health and contraception; water, sanitation, and hygiene; malaria; HIV/TB; and non-communicable diseases.

The young Sawyer Garrity and Andrea Pena of Marjory Stoneman Douglas High School were recognized for their song, “Shine.”  The piece was written in memory of their late classmates, and now benefits the Shine MSD fund for victims and their families.

Filmmaker Abigail Disney was lauded for her inspired documentation of war-torn nations, and her search for a way to connect.  Her mission to change the world, and to promote piece, is a central aspect of her work.

It was a packed-full event, and appeared to be getting even bigger as it looks toward it’s 5th year.

Even as the awards ceremony was in full-swing, the Celebrity Page TV pre-Emmy bash was already gearing up for a celebrity-worthy event.  Young actors lined up for a chance to hit the carpet before heading in and retrieving swag bags.

In short, last Saturday at Sofitel was simply on fire with the television industry; established actors, new talent, and what appeared to be the entire media corps of Los Angeles.  It’s doubtful whether these celebrations can get bigger; but it’s certain they aren’t getting any smaller.