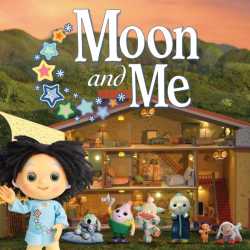 Teletubbies creator Andrew Davenport is about to launch his very first new series for U.S. audiences since Teletubbies. Moon and Me launches May 20 on NBC’s Universal Kids.

The Hollywood Times had the opportunity to catch the first episode and let me tell you, it was really a great show.  I truly love that this particular show is not using animation, sort of! Don’t get me wrong, I love animation, but using the crafted puppets with stop-motion animation, just brings this new show to life.  The younger kids will just love this show. If there are going to be toys, that will bring this show into another level.  Young children out there can play with their toys and react with what they see on the their television screen, tablet or Mom or Dad’s cellphone, while on a stroll in their stroller or carseat.  We will wait and see about the toys!! Until then, Mom could make little dolls for the kids to interact with during the episodes! So don’t miss your opportunity to gather the children around the television to catch this new, vibrant-colored and fascinating series on May 20th. You will also love the new catchy Michael Bublé  tune “The Silly Song.”

Here’s a preview of the episode I watched “Letter to The Moon”:

Teletubbies broke new ground and set new records when it entered the scene back in the late ‘90s, becoming a full-fledged children’s entertainment and pop culture phenom in the years that followed.

Davenport has been affectionately called “the J.K. Rowling of the preschool set” and a “toddler whisperer” with an inside line on what resonates best with little ones. Moon and Me is grounded in his and his team’s research on how kids play with toys, specifically, doll/toy houses. And fittingly, the new show looks and feels handmade, with (refreshingly!) no Computer-Generated Imagery.  Instead, it uses meticulously crafted puppets, stop-motion animation and homemade effects. So whereas Teletubbies was very BIG (i.e. actors in larger-than-life Teletubbies costumes, giant set pieces and oversized rabbits, so they would be in proper scale to the huge Teletubbies characters), Moon and Me is the total opposite.

In keeping with the toy house concept, the characters here are very small, miniature even, and irresistibly so, like this here little guy, Sleepy Dibillo.

Moon and Me, a BBC “landmark commission” (i.e. big priority and budget to match), was filmed stateside on a 15,000-ft lot in Atlanta’s Pinewood Studios, unlike Teletubbies, which was shot in the UK.