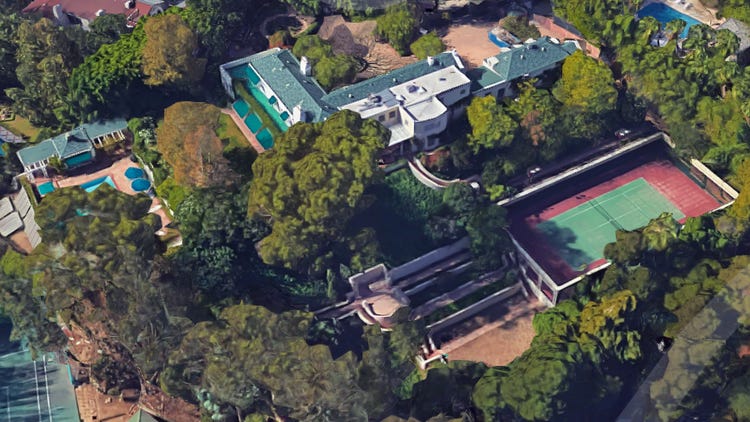 While Taylor Swift’s meteoric rise to music stardom is impressive, so too is her growth as a real estate mogul. As of 2020, she owns approximately $81 million in mansions and penthouses in Nashville, Rhode Island, Beverly Hills and New York City and is presently looking for a home in London to be near her boyfriend, British actor Joe Alwyn.

As a tween music prodigy, Swift’s parents moved from Pennsylvania to Nashville to help jump-start her career. A few years later at age 20, Swift embarked on her ten-year real estate adventure purchasing her starter home in the center of Nashville’s Music Row for $1.99 million. The 3,240-square-foot condo overlooking the city kept her close to the recording studios and her new peer group.

With her singing career growing rapidly and the necessity of spending time in Los Angeles, Swift needed a comfortable retreat and purchased a Cape Cod-style home in Beverly Hills in 2011 for $3.55 million that she sold a few years later for about $4 million. Back to Nashville in 2011, Taylor bought a 5,000-square-foot, Greek Revival-style mansion on almost six acres for her parents in the elite suburb of Forest Hills for $2.5 million that she still owns. In 2012, Swift bought a mid-century-modern home in Los Angeles for $1.78 million which she sold for $2.65 million in 2018.

By 2013, Swift’s music and real estate careers had both hit the stratosphere with multiple Grammy, MTV, People’s Choice, Billboard and Entertainer of the Year Awards, and her cash purchase of a 12,000-square-foot beach mansion in Rhode Island’s Watch Hill for $17.75 million. It is the house where Swift is known for the parties she throws for her girl squad. But soon back on the East Coast, New York City was calling.

By Valentine’s Day in 2014, Swift was checking out the trendy Manhattan neighborhood of Tribeca. She settled on two penthouses for $20 million, which she combined to cover 8,309 square feet of living space encompassing ten bedrooms and ten baths. She added a third next door in 2015 in the form of an $18 million townhouse and further in 2018 by adding an apartment in the same building for $9.75 million.

The best of them all came in 2015 in Beverly Hills when Swift bought the historic Samuel Goldwyn mansion for $25 million. In honor of Goldwyn’s award-winning career as a film producer and contributions to the film industry, Swift decided to restore the home to its original 1934 condition when it was built for the Goldwyns. In 2018, she applied for and won Los Angeles landmark status for the estate ensuring that the home will never be significantly changed or demolished.

Now at age 30, Taylor Swift isn’t slowing down for a second. Her new Netflix documentary, Miss Americana has just hit the Internet with a splash and it is rumored that she has jumped the pond and is in London checking out its real estate market!