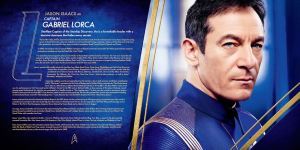 Seattle, WA (The Hollywood Times) 1/17/18 – My first expectations of Star Trek Discovery were mixed. I wasn’t expecting what I viewed, with all the delays, cost overruns and staff changes.  What I got was nothing short of unbelievable!  You see, I was 6 years old when Star Trek came on (that other network with the bird) back in 1966.  My family and I sat down in front of our small color TV, with 545 pixels and you had to physically get up out of your easy chair or sofa to ‘change’ the channel. Take that techies!

We watched in awe, this wagon train to space, with the pointy ear fellow, called Spock and a captain of an interstellar star ship with his Id, Ego and Superego found in Spock, Bones and Scotty.  Today, nearly 52 years later, we are graced with another installment of Star Trek with Discovery.  The name conjures up thoughts of foreshadowing, cunning, bravery, love, hate, joy, pain and more.  But what we find in Star Trek Discovery is all that and oh, so much more! 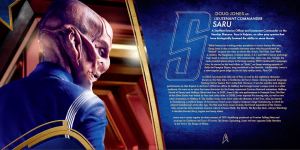 Looking at Captain Lorca, Jason Issacs, we find a man on the edge who should NOT even be in command of the fleets most prized star ship but locked up in an asylum to deal with his demons of his past which we are just getting to know about. To see his quarters, his inner sanctum where you see what appears to be the office, of Gil Grissom (William Petersen), another CBS show, CSI, where there are “things” in jars, cases and something that lurks in the night, behind the safety of a forcefield, and says, “Here kitty, kitty…”, screams PYSCHO at you.  Who is with this man? WOW! Dark, mysterious and I LOVE IT!

Then there’s Michael Burnham (Sonequa Martin-Green).  Who the hell is she but the only person in Starfleet dubbed, “The Mutineer!” What a title for such a wonderful character reborn from Sasha (TWD). Michael has a dark past with Sarek of Vulcan and as it turns out:

She’s the alleged brother of… well, someone we have come to love for the 52 years of Star Trek.  That being said, however, are we in the TOS timeline, the Kelvin Timeline or is Discovery in yet another timeline all its own and as we come to find, it’s the Prime Timeline. We wait with baited breath, grabbing for more every week and the wait is driving me to continue to watch.

Then there’s LT Staments. Let’s see, in the beginning there was LT Staments whose demeanor was a force to be reckoned with but then after sticking himself with the needles meant for the Tetragrade, he became, giddy, wonderful and just plain fun!  His relationship with the doctor is even more exciting that Star Trek has cross yet another barrier like the first interracial kiss with Kirk and Uhura.  I’m watching this character because there’s something we’re not seeing and that will keep me coming back for more.

Lt. Saru… when I heard Capt. Lorca call out Lt. Saru, it sounded like, Lt. Sulu! Was that intentional, hmmm? Perhaps, but Saru is a great alien character and a tall one too! He’s like the CAUTION light for the team. He’s the voice of reason and man that is struggling with trying to be, not just human but more like humankind. He’s designed for one purpose and one purpose only; prepare for inevitable death.  Now, he’s seeing the he can be so much more to the crew as we’ve learned in the episode where he was in-charge to find Lorca. It felt like when Kirk was lost in the Tholian Web and Spock was forced to work with Scotty and McCoy and Kirk wasn’t there to be that solid pillar of reason.

The giddy and tech nerd, Sylvia Tilly, reminds me of Gabby on NCIS, or any other tech nerd on any other great show on CBS.  I love the interplay with Sonequa Martin-Green (Michael Burnam) and how she’s working into a great friendship. This will be key, I believe, in the future of the show.  Tilly is cool when she lets her hair down, literally, and relaxes. She’s seeking guidance and mentorship from Michael on how to become a star ship captain. I believe, one day, we’ll see this lady become one and like with me being a software engineer, Tilly will not only have the ability to command well, but command with the analytical mind and logic of Spock. Could that be actually what’s in store for Tilly or something else? Stay tuned.

Then comes Ash Tyler (Shazad Latif).  How he came to be part of this merry band of people aboard Discovery is a wonder. Being held prisoner on a Klingon ship, with none other than Harcort Fenton Mudd was brilliant.  But I digress. Focusing on the topic and Ash Tyler’s rise from Prisoner to Chief Security Officer shows the brilliance of Capt. Lorca.  You see, Capt. Lorca saw in Ash something that makes him a key player in this story. Lorca with all his character defects, is building a ship that’s run his way, not Starfleet put everyone on edge.  Ash then begins to form a relationship with Michael and why not? Two prisoners, on a starship seeking something more have it not only in themselves but in each other. Watching this relationship bloom will be a soap-opera effect that got me hooked on the Guiding Light, many, many moons ago. Yeah, this reporter/writer loved watching that show.  But BEWARE! Things are not always what they seem.    Watch this space.

Ah, now we’re getting to the Klingons. Mary Chieffo (L’Rell). Boy, I missed this one. While researching the characters of Discovery and I came to Mary’s character, I never knew!  Boy I don’t want to meet her in a dark planet or nebula without phasers set to kill!  I’m excited about L’Rell.  She’s had a struggle to rise up to a full patriarchal society with Klingons becoming a member of her own house.

A dark, mysterious and dangerous character with a dark history that is yet to be explored. What did she do to Ash? The question really should be, who is Ash?  After watching Chapter 2, I’m convinced now that L’Rell holds a very dark secret and that secret is truly the darkness within; within Discovery and within her crew.  What rabbit hole did she throw Ash into or did Ash come out of? What happened over those 7 months in captivity.  Is Ash the devil child? I’m more convinced now, that by taking L’Rell aboard, not by choice, may be the Trojan horse, the virus, the very undoing of Discovery and her crew.  That much is certain.

Chris Obi most certainly is, indeed a polished actor with British and Nigerian roots.  To see Chris in the opening scene of the pilot as T’Kuvma stating the unification of the Klingon houses into the United Klingon Empire is breathtaking. The great language of my friend Mark Okrand, the creator of the Klingon Language, is beautifully spoken by Chris.  His power or desire rise to power is like nothing I’ve seen before with Trek.  This dynamic and pivotal role for Chris as T’Kuvma solidifies the role of the Klingons in the early history of the Federation after 100 years of peace or, so-called peace.  The Klingons are a proud and honorable race but T’Kuvma seems to be ‘radical’ and ‘dangerous’.  He’s definitely not happy and wants nothing more than to wipe out everything save for the Klingons. Isn’t this what the planet is facing with ISIS today? Perhaps, the Great Bird of the Galaxy’s influence has had a bit of influence in Discovery. T’Kuvma’s death turned him into a martyr and KOL tried to be the leader and look where that got him. Something else is brewing and yet this is not the end but the beginning.

I cannot forget Sarek of Vulcan, James Frain is a fantastic actor who portrays this wonderful character and yet here, on Discovery, we find Spock was not his only child or “experiment” as the elders would have it. This Sarek and the one in EP-11 of Discovery, are truly connected. James is a remarkable actor and I love this version of Sarek, but if I had to choose, Mark Leonard, James and Ben Cross is the order I’d choose. No offense, but Mark was wonderful, but James comes in a very close second.

Now for the hero of the show, the starship Discovery.  From its early design by Gene Roddenberry to what she is today, gives her the “ooh…ahh” factor we expect from Star Trek and our hero’s; the ships of the fleet. Like with the Enterprise, when we first saw her, our mouths dropped, and we were in awe!  So, it is with Discovery. What makes Discovery very, very different from all the other ships of the fleet is her drive both metaphorically and literally. The ships drive is not just its propulsion but her crew.  My real question is, why was she made and for what purpose or for whom does she serve? All questions I’m anxious to find out.

What is unique about Discovery is her sleek lines and the cutouts in the saucer section.  Seeing them spin in different directions when going to warp (shhh… whatever you call it, it’s NOT warp), creates a new and exciting way for the starship to fly throughout the galaxy. It’s unique and different and its we all expect from Star Trek.  I’ve read comments about the Discovery being faster than the Enterprise while being the in Prime universe. This tells me that the Discovery ‘was’ an experiment, dark ops and “hidden”. Our questions should be; What happened to Discovery? What happened to the crew? How will Star Trek answers these and many other questions? Wait and see!

In conclusion, I need to give Star Trek Discovery two thumbs up and a mighty BRAVO ZULU.  The show gives you everything you’d expect from Star Trek and more and more and even more you didn’t!  The characters are diverse, fun and exciting and scary.

Star Trek Discovery is the epitome of all the other Star Treks that have ever come out. They captured Gene’s vision and took it to the next level. The characters are REAL, it, makes the people in the show, REAL, like us who watch it. We swear, we screw up, we make mistakes and we learn. It is only through mistakes that we gain experience.  That being said, what happened in Chapter 2 is nothing short of shocking and Jonathan Frakes directed a winner here.

The mistakes they make in Chapter two will be the cornerstone of what this show is about. The experience they gain will drive them in a new direction, change the rules and force this crew to do things they were never meant to do. Star Trek Discovery is dark, different and takes you on a journey that no other Star Trek has ever boldly gone; before. Buckle up!