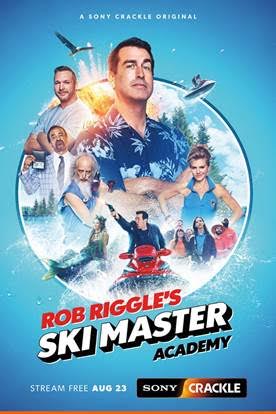 In this Sony Crackle original comedy series, celebrity patriot Rob Riggle, who is mostly known for his legendary ski master movies, has invested all of his money and reputation into an Academy celebrating America’s truest art form…personal watercraft riding.  Riggle, his legendary stunt man commandant Dirk Hamsteak (Billy Merritt) and their entire staff of instructors spend a semester defending their beloved Academy at all costs.  No matter how many people criticize it… go missing…or die!

Sony Crackle is the only free, ad-supported streaming service that combines premium Original programming with curated blockbuster library titles hand-picked for its core audience of connectors: a coveted audience whose gaming consoles and streaming devices are their gateway to entertainment. Located on the lot of one of Hollywood’s most iconic studios, Sony Crackle is the launchpad for Original hits like “The Oath,” “Snatch,” “StartUp” and “SuperMansion.” With a team that spans some of the best of entertainment, tech, data science and gaming, Sony Crackle has surpassed 100M downloads to date and is available for free or as a paid service on over 25 devices and in 20 countries around the globe. For more information, go to www.sonycrackle.com or follow @SonyCrackle on Facebook, Instagram and Twitter for real-time updates.