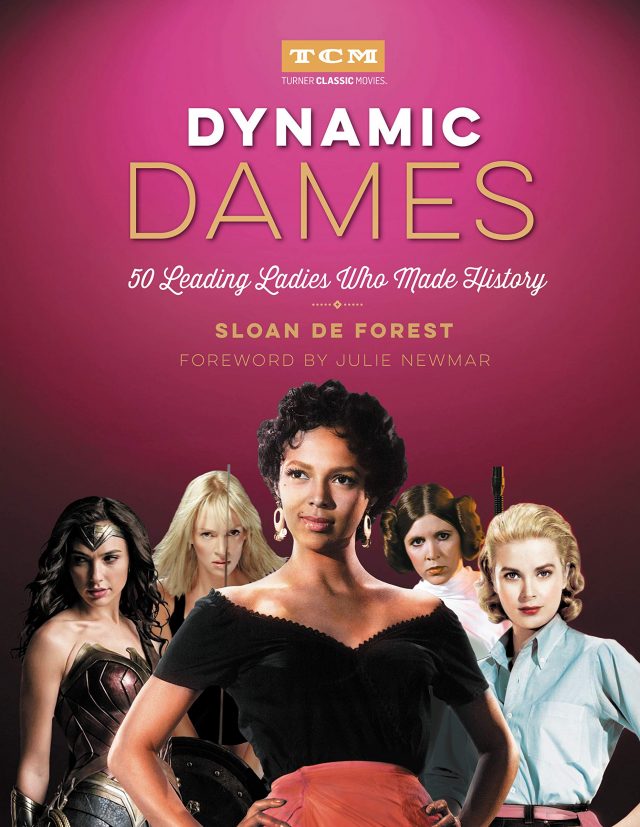 Los Angeles, CA (The Hollywood Times) 12/09/19- Dynamic Dames is the culmination of years of absorbing movies and dreaming for Author and Screenwriter, Sloan De Forest. It Celebrates 50 of the most empowering and unforgettable female characters ever to grace the screen, as well as the artists who brought them to vibrant life! From Scarlett O’Hara to Thelma and Louise to Wonder Woman, strong women have not only lit up the screen, they’ve inspired and fired our imaginations. Dynamic Daymes doesn’t pander to the predictable. It celebrates some of the most feminist characters in the movies and also illuminates the struggles and triumphs of female screenwriters, producers, directors, and other women who created the characters and brought them to life.

Sloan De Forest: I grew up in the suburbs of Dallas, where football was the local obsession, but I was fascinated instead by movies. Jodie Foster in The Silence of the Lambs, Melanie Griffith in Working Girl, and Sigourney Weaver in Aliens are some heroines who made a big impression. In my twenties, I started acting professionally and aspiring to be a screenwriter, both of which led me to Los Angeles — specifically Hollywood — where I started getting work as a film historian and writer. One of my jobs was for the Mary Pickford Foundation, where I learned about the incredible contributions Pickford and other women made to the nascent film industry in the 1910s and 20s. But even as a child, I was always drawn to and inspired by strong-willed, smart, and sassy women on the screen, so in a way, I feel that I’ve been planning subconsciously to write Dynamic Dames my whole life. 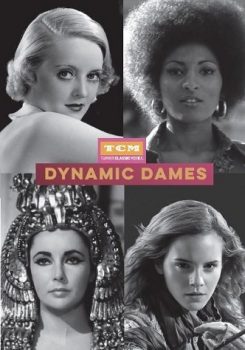 Have you always been a champion for women? What causes or organizations do you support?

Sloan De Forest: Women’s equality has been at the forefront of my mind since High School, when my Government teacher told the class that women did not contribute as much to society as men, nor were they as skilled! I was infuriated. Deep down I knew it wasn’t true, but at sixteen I didn’t have the ammunition to argue that point. That incident ignited a fire in my belly to prove that women can do far more than just be assistants or wives to men, and should be given equal opportunities to do so. Even in the movies, we can do a lot more than just stand in the background looking frightened and pretty while the men fight the bad guys. I support all causes and organizations that sensibly strive for equal rights for females and all people for that matter.

What does women’s empowerment mean to you?

Sloan De Forest: To me, women’s empowerment simply means that anyone suppressing or underestimating the female gender needs to step aside and let women and girls claim their natural power, which essentially means being the masters of their minds, bodies, and bank accounts. I think sometimes buzzwords like “empowerment” are misinterpreted as attempts to masculinize women, to make them into something they aren’t. But in fact, women have always possessed formidable power that, for centuries, they have been discouraged from wielding. Those helpless young women in movies and TV, for example, who cower in the corner and whimper “Please don’t” when the ax-wielding maniac is approaching have always been laughingstocks to me and my girlfriends, my sister, my mom. We don’t know any grown women who would react like such babies in that situation. Who wouldn’t grab any handy blunt object and smack the guy, then run? I think the world is finally starting to catch on that this fictional behavior has been perpetuated by male screenwriters and directors, and does not reflect reality.

Have you always wanted to write a book about powerful women in film? What led you to write “DYNAMIC DAMES: FIFTY LEADING LADIES WHO MADE HISTORY?”

Sloan De Forest: Dynamic Dames is a book that seems to have been percolating in the back of my mind forever, but I didn’t realize it until Cindy Sipala, my Editor at Running Press, suggested I write something about “badass women in the movies,” as she expressed it. I said “I can do that!” and proceeded to flesh out the concept with some of my all-time favorite leading ladies. It could have taken a different direction — for example, the focus might have been on the highest-paid or most famous actresses in history — but I believe in the importance of fictional role models. I think the Geena Davis Institute has the right idea with their slogan “If she can see it, she can be it.” This is certainly how it happened for me. Seeing Rosalind Russell in His Girl Friday and Nancy Olson in Sunset Boulevard made me think perhaps I could be a working writer, could go to Hollywood and make it using brains and talent. Dynamic Dames is the culmination of years of absorbing movies and dreaming.

What is the first thing that people will notice about your book?

Sloan De Forest: Aside from Dorothy Dandridge holding court front and center on the cover, I think people notice when they first start reading that this book is unique because it doesn’t pander to the predictable. There’s nothing wrong with books that revel in the most beautiful, glamorous, and talented women in Hollywood history: the Marilyn Monroes, the Rita Hayworths. But Dynamic Dames has a different focus. It celebrates some of the most feminist characters in the movies and also illuminates the struggles and triumphs of female screenwriters, producers, directors, and other women who created the characters and brought them to life.

Describe the recurring themes in your book.

Sloan De Forest: One important theme is what all these Dames have in common: a real live strong woman behind them — either the actress, the writer, or someone else behind the scenes. I think that’s the most interesting aspect of the book, the peeling away of fiction to expose the fact beneath. How did a character as powerful as Queen Christina make it to the screen in 1933? Because Greta Garbo had enough power to hire a female screenwriter to write this part for her and to get the movie made. How come the 1948 noir Road House features such an unusually virtuous, courageous femme fatale? Because Ida Lupino commissioned the original story and sold the screen rights to Fox so she could star in the adaptation. How did Wonder Woman finally get to the screen after being created in 1941? Largely because of director Patty Jenkins. Powerful women OFF the screen are often the ones responsible for powerful women ON the screen. This is why we need more of them in Hollywood.

I noticed that there is a notably diverse group of women in “DYNAMIC DAMES.” How did you go about the selection process? What is a DYNAMIC DAME?”

Sloan De Forest: A Dynamic Dame is a woman who is the hero of her journey. She typically faces opposition but doesn’t back down or submit, and she’s more than merely the main character’s girlfriend. All fifty of the characters I discuss are either women who can be viewed as strong, independent role models from the outset (like Uma Thurman’s Bride in Kill Bill), or who become stronger and more self-reliant as the movie progresses (like Whoopi Goldberg’s “Celie” in The Color Purple). Within that definition is room for variety and diversity. I wanted to send the message that you don’t have to be a specific type of woman to be considered dynamic or heroic; any woman who strives to be the master of her own destiny is worthy of admiration in my book. Still, it was a challenge to narrow the list down to 50! That’s why I “name-drop” so many more.

What makes your book a great gift for the holidays?

Sloan De Forest: I do think it’s a great holiday gift because most everyone who reads it finds something different to like about it. It’s been so gratifying to see the feedback and reviews so far. Young women report learning tons of new information and feeling inspired, older women say they enjoy being reminded of forgotten favorite movies, and men are loving it way more than I expected. Maybe because they like looking at the photos of beautiful ladies, and they also appreciate reading about the Star Wars and Alien movies, the Tarantino films, the 70s exploitation movies with Pam Grier, and others. It sounds cliche, but there is something for everyone in Dynamic Dames.

Who is your favorite “DYNAMIC DAME?”

Sloan De Forest: I love them all. If I had to pick a favorite category, it would be “Ladies Who Laugh” because I love comedies, and I believe in the power of humor. If you can make someone laugh, you can win them over. It’s a subtle, positive path to empowerment. For example, Mary Poppins is a force to be reckoned with, but because the movie is so delightful, audiences may not be consciously aware of how powerful or feminist this nanny is. They just go along for the ride without thinking about it. Private Benjamin also grabs us with physical comedy gags in the first part of the movie, then we gently transition into an arc of female empowerment. But then, I also respect the in-your-face badasses like Thelma and Louise and Pam Grier. In the movies, violence can be as effective as laughter!

Sloan De Forest: Julie is a true Dynamic Dame, and was a joy to work with. I have loved her as Catwoman since I was a kid, so I was fortunate to be introduced to her by a mutual friend and ask her to write my foreword. She not only readily accepted, but she wrote a great piece lightning-fast. I so appreciate her contribution. Given her lengthy career and her star quality — plus her cattitude from way back in the day — she sets the perfect tone for the book.

Sloan De Forest: It’s a bit too soon to announce my next non-fiction book, but I can say I’m writing a play and working on some other fiction projects. I love writing about classic film and popular culture, but I hope to also branch out to include some original works of fiction.

One Sentence Summary of Your Story

In DYNAMIC DAMES: FIFTY LEADING LADIES WHO MADE HISTORY, author/actress/film historian Sloan De Forest contributes an important chapter to the story of women’s empowerment in our time.

Focusing on 50 legendary actresses in their most exciting roles, the Turner Classic Movies-branded DYNAMIC DAMES takes readers on an inspiring journey through film history as filtered through the lens of powerful women “who inspire us with their courage, brains, and integrity, and also the multi-talented women behind the characters,” says the author.

From the Jazz Age superstar Clara Bow to the contemporary embodiment of Wonder Woman, Gal Gadot, De Forest presents readers with a dazzling collection of strong characters and the women who brought them to life.