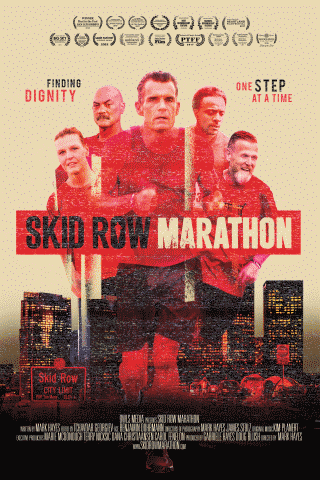 Los Angeles, CA (The Hollywood Times) 3/11/2019 – Skid Row Marathon is an award-winning and compelling documentary that spotlights the Midnight Mission Runners Club on Skid Row created by LA county criminal court Judge Craig Mitchell. Director Mark Hayes and his wife, Gabrielle Hayes, follow Judge Mitchell and the evolving sundry group of addicts and ex-criminals that Mitchell started in the heart of LA’s homeless community. The Judge suffers from a painful spinal condition, ignoring doctors’ advice, he continues to run and needs the club he founded as much as the newly appointed members do. It is Mitchell’s opportunity to change the world in ways he can’t within the legal system.

Judge Mitchell says the Runners Club began after a man he had sentenced to state prison came back into his courtroom after he was released. He invited the judge to come to the Mission to see what work he was doing there to turn his life around and asked the judge if he could contribute. Judge Mitchell began with a few runners to train for marathons and hasn’t stopped.

The hottest places in hell are reserved for those who in a time of great moral crisis seek to maintain their neutrality. Judge Craig Mitchell

One parolee – Rafael Cabrera wrote the judge for years, Mitchell says, “I’m mindful that a convicted murderer and a judge on the superior court don’t often times share regular correspondence let alone develop a highly prized friendship. That’s unusual I know that.” It makes sense that this judge once thought the priesthood called him. Wife Juliet Ingram says, “I think he still has the heart of a priest. He’s making a difference in these guys’ lives and they’re making a difference in his too.” The club is a second chance at life while the men and women battle back from depression, addictions and a complete state of hopelessness.

The Midnight Mission Marathon raises money for runners to go to other countries (we follow them to Accra, Ghana) which Mitchell feels is a critical motivating factor to keep “these people on the straight and narrow, to keep them involved in recovery and exposed them to the larger world I want them to be a part of.” They train to run 27K. The documentary opens two days before the Skechers Performance Los Angeles Marathon – the iconic “Stadium to the Sea” run.

Here in the city with one of the highest homeless rates in the nation is one man from the legal bench changing lives through running. It is a stark reminder of the loss of America’s middle class and the true cost of gentrification in this country as much as it is about addiction. Loss comes in all forms and this documentary takes you on the ride from despair to hope and the cost that lies between – not everyone crosses the finish line. It triumphantly both visually and narratively holds up one man’s humanity as an example of what changes could occur if we believed it could happen to us – because it can. Skid Row Marathon is a masterful piece of cinema in an unusual take of the homeless, educating while touching the heart with artistic strokes of our city’s street beat. Director of photography, James Stolz’ eye lends a captivating view.