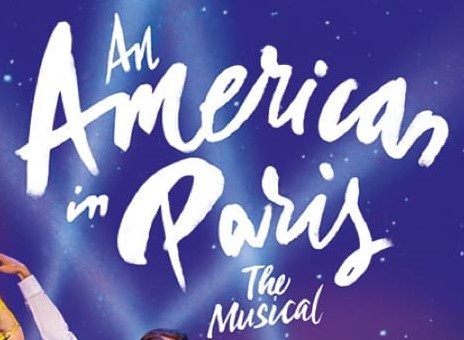 “Truly ravishing!”–The Guardian on AN AMERICAN IN PARIS (2018) 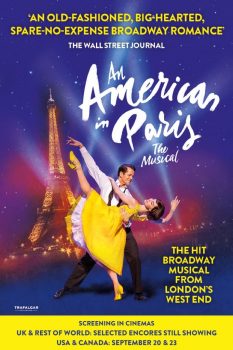 Los Angeles, CA (The Hollywood Times) 6/28/18 – AN AMERICAN IN PARIS, the breathtaking Tony Award-winning Broadway musical inspired by the 1951 Oscar-winning MGM film, tells the impassioned story of discovering love in the City of Light during the aftermath of World War II.  Jerry is an American GI striving to make it as a painter in a city suddenly bursting with hope and possibility.  Following Jerry’s encounter with a beautiful young dancer named Lise, the streets of Paris become the backdrop for a daringly sensuous, modern mix of art, friendship, and romance.

Featuring George and Ira Gershwin’s gorgeous music and lyrics (including classic hits such as “‘S Wonderful” and “I Got Rhythm”), stunning designs, and show-stopping choreography, AN AMERICAN IN PARIS is coming to a US cinema near YOU on Thursday, September 20th and Sunday, September 23rd, 2018!

AN AMERICAN IN PARIS is directed by Christopher Wheeldon, produced by Stuart Oken, and written by Craig Lucas.  It features original Broadway stars Robert Fairchild and Leanne Cope as Jerry and Lise.

The show was taped live during its London production last year and screened in theaters across the globe on Wednesday, May 16th, 2018.  The stage show of AN AMERICAN IN PARIS first premiered in Paris in 2014.

Watch this space for this reporter’s forthcoming review of the 2018 tape, and please follow this link for locations and showtimes:

Hollywood History of AN AMERICAN IN PARIS:

The all-new cross-cultural version of AN AMERICAN IN PARIS described above continues a distinguished line of development beginning with George and Ira Gershwin’s 1928 orchestral composition of the same name.  The Gershwins’ music was showcased in the 1951 MGM film AN AMERICAN IN PARIS starring Leslie Caron and the incomparable Gene Kelly, who actually spoke French and won an honorary award for this role at the 1952 Oscars.  Saul Chaplin was the music director. 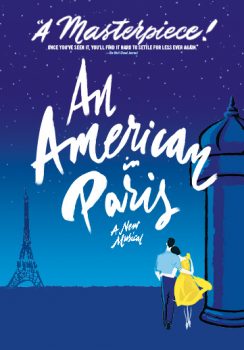 This landmark musical film was directed by Vincente Minnelli, father of Broadway legend Liza Minnelli by Judy Garland, with a script by Alan Jay Lerner.  The climax of the film is “The American in Paris” ballet, a 17-minute dance featuring Kelly and Caron that references several famous French painters including Dufy, Renoir, Rousseau, Toulouse-Lautrec, and Utrillo.  The avant-garde ballet sequence took four weeks to shoot and cost almost half a million dollars to complete.

In 1993, AN AMERICAN IN PARIS was selected for preservation by the United States Library of Congress  in the National Film Registry for being “culturally, historically, or aesthetically significant.”  It is ranked #9 among the American Film Institute’s Greatest Movie Musicals.

For people all over the world still grieving the ghastly losses of World War II, AN AMERICAN IN PARIS represented a triumph of sorts that hardly seemed trivial.  Banned in some countries such as French Indochina for its depiction of “amoral” Franco-American relations, the sprightly film held out hope for the re-establishment of peace and even love as the United Nations of World War II solidified into the United Nations organization based in New York City that we all know today.  So was this musical escapist–or anticipatory? 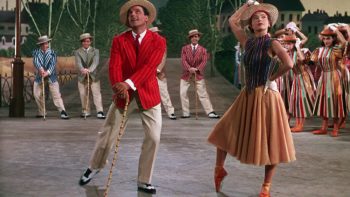 The epilogue of Damien Chazelle’s award-winning 2016 film LA LA LAND evokes the set designs and costumes from Vincente Minelli’s timeless yet very modern musical AN AMERICAN IN PARIS.  As an audience, our love is here to stay!