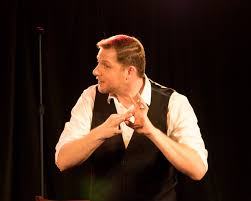 Burbank, CA (The Hollywood Times) 11/03/2018 – SIGNing the Song written, performed and directed by William Martinez played a limited four-performance engagement at the Colony Theatre from November 1st – 4th with David Bawiec as musical director. Singularly one of the best one-man-shows to come to this down in years. Residency, please! 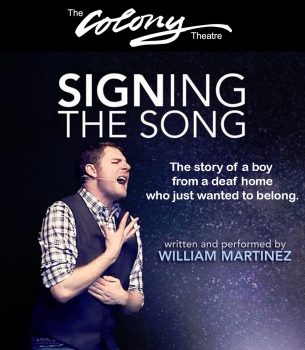 This immersive one-man show celebrates the extraordinary impact educators and parents can have on each child’s life … regardless of their struggles. Through American Sign Language (ASL) paired with singing – the show shares a true story of a boy who grew up in a deaf household with little exposure to movies, radio or television. Much like the Miracle Worker – it would be a teacher (in William’s 8th grade music class) and the love and support of his parents – who individually helped him to discover and rediscover his voice – that took him out of his silent world. His mother was born deaf and his father could hear. This made him a “Coda”, child of a deaf parent. He attended 20 elementary schools when his mother was a single parent after splitting with his father. So, fitting in as a child who wasn’t good with speech let alone not knowing anyone – was brutal.

William describes his 8th grade music teacher, Norma Freeman: “She gave me an opportunity to sing a solo during a presentation for our parents. I told her, that being deaf, my mom would not be able to enjoy it and would feel left out surrounded by all the parents who could hear their children sing. So I declined. Instead of choosing another student, Mrs. Freeman came up with a brilliant idea: ‘How about you sing and SIGN your song?'”

The show is the seamless intertwining of ASL (American Sign Language) and song lyrics creating a supremely unique art form. Local John Burrows High Powerhouse Vocal Ensemble stood strong, both behind Mr. Williams – and alone in their various numbers. The message of how much we lose for the arts in our schools was resoundingly clear.

As William’s goes through his life and achievements the most poignant moment in the show – and there are many – is when he nominates Ms. Freeman and she wins in 2017 at the The Kennedy Center’s or Stephen Sondheim’s Inspirational Teacher Awards. He continues to thank her for opening his eyes, his heart and soul and helping him to see what he always wanted. To be “heard” – a common cry of so many people in our world. William makes it clear – while instructing the audience with a few simple ASL signs that we all can go back to those who’ve helped us and not only thank them but to make the effort to be what they taught us and learn some more while seated.

A show for every age, every person, every nation, every country… the list is all inclusive and the show? Brings tears of laughter and tears or recognition – we don’t have to be deaf or come from a family that had a deaf parent because we all have a bit of our own not normal in our pasts. Martinez is genius in getting us to look at that, recognize it and embrace while giving a swift kick in the rear to do something about it! Thank people… know you’re a part of something somewhere even if it doesn’t seem that way – look, keep your eyes open. At a time where once again our schools suffer tremendous losses with funding in the arts department – William Martinez show is the answer to educate and empower the schools, the public and parents.

In a town where every show is given a standing ovation – this piece made you want to jump out of your chairs on more than one occasion and become a part of the show – the intimacy enthralled the audience… because it is that good, that fine and that moving.

Brilliantly done, William Martinez. If you can get a ticket in time for the last show, RUN, if not? Look for his future shows and if his name pops up anywhere? Take your entire family or the neighborhood block to see him. Healing and love emanates from this beautiful performer.

William Martinez is currently touring the educational market with SIGNing the Song.

(The show ended Sunday, it was for a limited engagement)