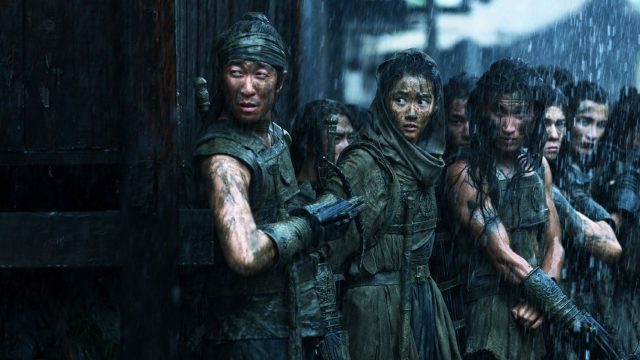 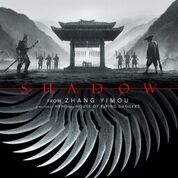 Los Angeles, CA (The Hollywood Times) 4/8/19 – At first, you think Shadow is shot in black and white. Then, you realize that the skin-tones are pale pink, the forest is a muted green and the copiously flowing blood is deep red. The film stock is color: the world is black and white. Every stunning period costume, every magnificent set is created in a monochrome wash mimicking classic Chinese ink brush painting. The effect is overwhelmingly beautiful. It’s painful every time you have to look away, and you constantly have to look away because unless you speak Mandarin you have to read the damn dialog.

Shadow is the latest offering from acclaimed Chinese director Zhang Yimou. American audiences first encountered Zhang in the late ‘80s and early ‘90s with the award-winning Red Sorghum and Raise the Red Lantern. He came into his own in the early 2000s with the arrival of Chinese wuxia movies: Epic historical films filled with gravity-defying martial arts, beautiful people in melodramatic circumstances, and cast-of-thousands battles. Best known of the genre were Ang Lee’s Crouching Tiger, Hidden Dragon and Zhang’s The House of Flying Daggers. Ang Lee came West and made everything from love stories (Brokeback Mountain) to Marvel comics (The Hulk). Zhang Yimou stayed in China and directed wuxia classics like Hero as well as the spectacular opening ceremony of the 2008 Beijing Olympics.

Shadow is set during the Battle of the Three Kingdoms, a period of Chinese conflict around the 3rd Century AD. The story may be familiar to Chinese audiences but is as alien to me as if it were set on Pandora — and every bit as visually engaging. We’re in the Kingdom of Pei, ruled by a whimsical young monarch who may be smarter than he appears, and defended by a battle-scarred Commander who may not be who he appears to be at all. This is a story of doubles and doppelgängers — shadows — and everyone has a secret to hide.

The story unspools slowly and sometimes the dialog is expository and stilted (plus again, you have to read it) and star Deng Chao tends to overplay one of his roles and underplay the other. But, the heartbreakingly gorgeous princess (Xiaotong Guan)! The flowing silken robes! The elaborate armor and headdresses! The hidden passageways and stolen kisses and wire-work fights between a scimitar and a paper umbrella!

By time we get to full battle scenes in the rain fought with whirling steel blades and bamboo staffs against what look like cliffs made of anthracite, the story has escalated to Hamlet meets Game of Thrones. Bloody betrayals and startling reversals escalate, and the stately opening act leads to a wild and suspenseful ride.

It’s a peek into a different time, a different place, and a different visual motif where black and white, male and female, wet and dry, king and commoner clash and intermingle like washes of black ink on rice paper. In all, stunning.

Screenplay: Li Wei, Zhang Yimou, based on a screenplay by Zhu Sujin

In Mandarin with English subtitles

116 Minutes. Opens in select theaters May 3