By: Judy Shields
Los Angeles, California (The Hollywood Times) 4/11/2018 – “When I discovered this story, I was captivated by it. Here was this stray dog living on the streets of New Haven Connecticut, homeless, hungry and a bunch of soldiers came to town and they just adopted him, and so the story began for me. We all love our dogs and the story of a dog and a relationship with a man, and the military history, I thought it was really quite remarkable.”  Richard Lanni told The Hollywood Times at the première of the movie.
Sgt. Stubby: An American Hero is an upcoming computer-animated feature film based on the incredible true story of America’s most decorated dog. After being rescued off the streets by a young Soldier on the eve of America’s entry in World War I, Stubby is given a home, a family, and the chance to embark on the adventure that would define a century. 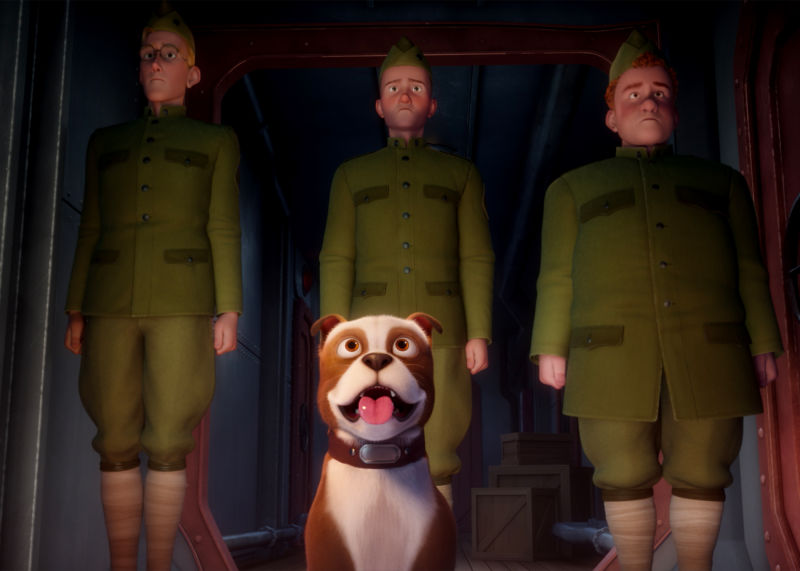 Sgt. Stubby is based on the incredible true story of the unbreakable bond between a young WWI Soldier and a stray dog who, for his valorous feats, is still recognized today as the first dog promoted to the rank of Sergeant in the U.S. Army, the most decorated dog in American history and is widely considered the forerunner to the U.S. Army’s working dog program.


Opening April 13 on approximately 3,000 screens across the U.S. and Canada, Sgt. Stubby was directed by award-winning documentarian Richard Lanni in his feature film début and stars Logan Lerman (Fury, The Perks of Being a Wallflower, Percy Jackson & The Olympians), Helena Bonham Carter (the upcoming Ocean’s 8, the Harry Potter films, The King’s Speech, Sweeney Todd) and Gérard Depardieu (Life of Pi, Cyrano De Bergerac, The Man in the Iron Mask, Green Card).


Narrated by Helena Bonham Carter, Stubby retraces his path to glory, which began in late 1917 when he ran into Robert Conroy (voiced by Logan Lerman), a young private training on the Yale University campus in Connecticut.
The stray and the soldier soon became friends, with the latter teaching Stubby how to stand up on his hind legs and salute his superior officers. When Conroy is called to action, Stubby finds a way to follow his master all the way to the battlefields of France.

The film takes place mostly in France, with director Richard Lanni (whose credits include several war documentaries) focusing on the details of trench warfare, such as the use of gas masks, the constant rumble of mortar fire and the pools of mud caused by the incessant rainstorms. Amid the chaos, Stubby quickly proves himself to be a worthy combatant, fearlessly dashing across no man’s land, alerting the Allies about incoming shells and saving soldiers in danger.

The script, written by Lanni and military adviser Mike Stokey (The Thin Red Line), also hashes out the stories of Conroy and other soldiers, including a French gourmet and bon vivant, Gaspard (voiced by Gérard Depardieu, of course), who accompanies Conroy on dangerous sorties across enemy lines. Other characters include a German American (Jim Pharr) who suffers prejudice at the hands of his fellow troops and winds up getting badly wounded, and a comic relief character named Olsen (Jordan Beck), whose fate is sealed on the very last day of the war. (The film underlines the fact that although the armistice was signed early on the morning of Nov. 11, 1918, the battles went on for several more hours, resulting in many unnecessary deaths.)
The score by Patrick Doyle (Rise of the Planet of the Apes, Brave, Thor, Harry Potter and the Goblet of Fire) also hits the right emotional notes in the right places, especially during a closing sequence where the legend of Stubby finally becomes fact.
The Hollywood Times spoke with Patrick Doyle and he said that he was truly honored to be asked to compose the music for the film. He also said he really likes composing music for animated films. I asked him if it was easier to compose music for a live action movie or an animated one. He said to some extent, animated movies where somewhat easier to score than live action movies.

This is a great movie with a wonderful and heartfelt story to tell about a brave dog during the time of war. There are not too many of us out there that enjoy seeing war movies about the death of men serving their country. With this movie, it tells the story of the bond of a soldier and his dog and the dog brings them hope for survival to get them through the war.
It is a great movie for junior high and high school kids to watch to learn about World War I and maybe even Google it and Sgt. Stubby to give them interest in learning. So go out this weekend and watch this delightful animated film and talk to your kids about what they thought about it. 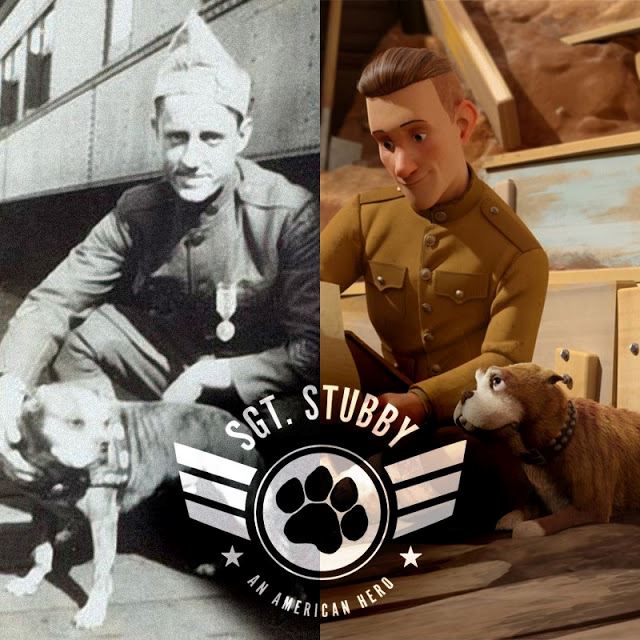 ABOUT SGT. STUBBY: AN AMERICAN HERO: With the “War to End all Wars” looming, the life of Army “doughboy” Robert Conroy (Lerman) is forever changed when a little stray dog with a stubby tail wanders into a training camp in New Haven, Conn. Conroy gives his new friend a meal, a name, a family and the chance to embark on an adventure that would define a century. Narrated by Robert’s sister Margaret (Bonham Carter), Stubby and his new best friend quickly find themselves in the trenches of France. Befriended by French poilu Soldier Gaston Baptiste (Depardieu), Stubby accompanies the duo along their epic journey through harsh conditions and incredible acts of courage, showing the world that the greatest heroes can come from the unlikeliest of places.

ABOUT THE REAL-LIFE STUBBY: Before he was a hero, Stubby was homeless, unwanted, unwashed and unloved, scrounging for scraps on the streets of New Haven, Conn. in 1917— Until he was taken in by Private First Class Robert Conroy of the 102nd Infantry Regiment, 26th “Yankee” Division.  In France, Stubby saw frontline action in four offensives and 17 battles.
He found wounded Soldiers, saved an entire company by alerting the men to don gas masks and even caught a German spy.


After the recapture of Château-Thierry, the women of the town made him an embroidered jacket that would serve as Stubby’s uniform and display his numerous awards throughout the rest of his career.  His exploits made front-page news in the U.S. and earned him the rank of Sergeant, the first time an animal is recognized as having been promoted through combat.


Following the war, Stubby returned home to a hero’s welcome, touring the country leading victory parades and meeting three sitting U.S. presidents.
In 1926, the beloved Sgt. Stubby died at home in Conroy’s arms.
Honored with a half-page obituary in the New York Times — much longer than those of many notable people of the time. 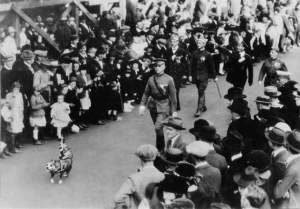