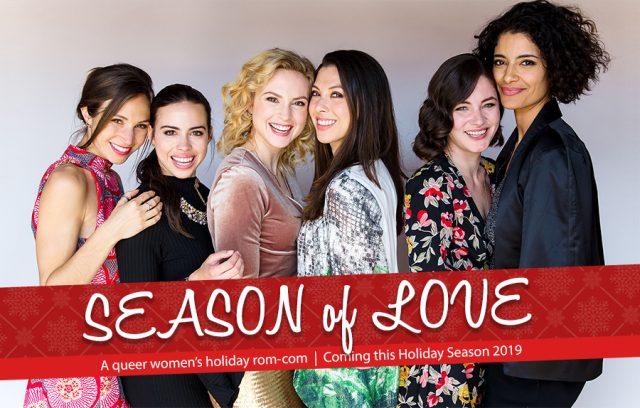 T’is the Season For A Queer Holiday Movie … Finally!

Los Angeles, CA – Tis the Season for Holiday movies!  The production team of Tello Films and DASH Productions are bringing something new and different this holiday season: “Season of Love” – the first ever Lesbian/Queer Holiday Rom-Com.

This little gem of a movie comes out early December online at https://www.seasonoflovemovie.com/
Written by Kathryn Trammell, directed by Christin Baker, “Season of Love” is a lighthearted rom-com featuring a large ensemble cast of diverse women and their connected love lives during the hectic holiday period just before Christmas through the New Year who discover love truly is the best gift of all.The movie brings together some fan favorites including actresses  from classic LGBTQ films and current television shows including  Dominique Provost-Chalkley (“Wynonna Earp”, “Avengers: Age of Ultron”), Jessica Clark (“True Blood”, “A Perfect Ending”), Emily Goss (“Snapshots”), Laur Allen (“Young and the Restless”), Janelle Marie and  Sandra Mae Frank (“Deaf West’s Spring Awakening”, “Daybreak”).
“I’ve always wanted to do a Rom-Com movie, but if you’re going to do a Rom-Com why not do one that’s going to push the boundaries a little bit and gives this beautiful community what they so deserve, a happy ending,” says Dominique Provost-Chalkley.“It’s a Love Actually for our community,” comments Jessica Clark.

The  highly anticipated full-length film will of course deliver a very Christmassy soundtrack featuring a wide range of original tunes.
“Lift Your Spirit Up”, the film’s lead track written by Billy Steinberg and Josh Alexander, is performed by Dominique Provost-Chalkley at the end of the movie.  Steinberg’s repertoire includes the 80s classics “Like a Virgin” by Madonna, “True Colors” by Cindy Lauper, and “Eternal Flame” by The Bangles.

Every holiday season traditional and streaming networks create a ton of holiday romantic comedies but they consistently fail to create meaningful stories from the queer perspective.

Taking over the holiday TV space, Lifetime just announced the release of 28 films this Holiday Season while its competitor, Hallmark, is delivering 24 new original movie premieres this season. And if both networks have made an effort to move toward diversity and inclusion by featuring women of color in leading roles, the networks still have ways to go when it comes to other ethnicities and marginalized people – still an industry-wide issue.

One area that is underserved across all networks is the lack of LGBTQ representation in its Christmas movies. While some movies hint at queer stories, explicit LGBTQ+ stories remain rare.

Decrying the lack of LGBTQ+ characters and more specifically LGBTQ+ female leads in holiday movies, Tello Films and DASH Productions are proud and excited to be breaking grounds and releasing the first ever Holiday romantic comedy for LGBTQ+ women, Season of Love this December.

“We talk a lot today about diversity on screen but it’s also important to talk about diversity behind the camera.  Season of Love has a queer female writer, director and producers that shape the voice of the film and it rings so true to a queer woman’s experience because we have queer women all over this cast and crew. It’s a delight to be part of that,” says Emily Goss.

Tis the “Season of Love”!”if you don’t see what you want,” says filmmaker Christin Baker, “then make it!”

“Season of Love” currently has two theatrical screenings with cast and crew, one in Los Angeles on November 21 and one in Nashville on November 26.
The film will be available online for pre-sale on October 15 and will be available for rent and/or purchase in early December 2019 at:  https://www.seasonoflovemovie.com/

Guy Moshe’s, LX 2048 – A near future dystopian look at what happens when we want virtual over real