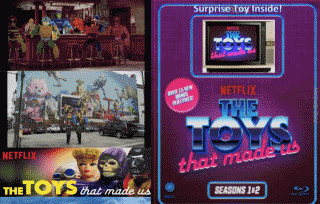 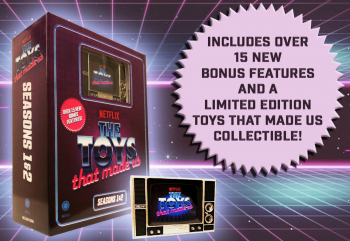 SCREEN MEDIA TO RELEASE  THE TOYS THAT MADE US
*SPECIAL EDITION*

The Hollywood Times had the opportunity to watch these amazing stories of The Toys That Made Us that was featured on Netflix and what a great job Brian Volk-Weiss and his team did with the material, research and footage they brought to these DVDs for our enjoyment. To be released on Blu-ray October 1, 2019

Don’t miss your opportunity to get the Blu-ray set for yourself and give it as a birthday or upcoming Holiday gift.  There is bond to be someone in your life that would love be reminded of The Toys That Made Us and that person could share their memories of those toys with their kids and grandkids. What wonderful memories to share or make with our loved ones.

Check out the review here:

The Hollywood Times July Article of The Toys That Made Us:

Netflix’s ‘The Toys That Made Us’ Now Available on DVD

Check out the Season 1 Trailer and Season 2 Trailer!

Blu-ray Special Edition!  The Toys That Made Us is an American television series created by Brian Volk-Weiss. The first four episodes of the series began streaming on Netflix on December 22, 2017, and the next four were released on May 25, 2018.  The 8-episode documentary series, as it was originally touted, focused on the history of important toy lines. The first four episodes focus on the Star Wars, He-Man and G.I. Joe toy lines with subsequent episodes featuring LEGO, Transformers, Hello Kitty, and Star Trek.

Screen Media Ventures, LLC, a Chicken Soup for the Soul Entertainment, Inc. (Nasdaq: CSSE) company, acquires the rights to high quality, independent television series and feature films for the US and Canada. With a library of over 1,500 television series and motion pictures, Screen Media Ventures is one of the largest independent suppliers of high-quality tv series and motion pictures to U.S. and international broadcast markets, cable networks, home video outlets and new media venues. For more information, visit: www.screenmedia.net