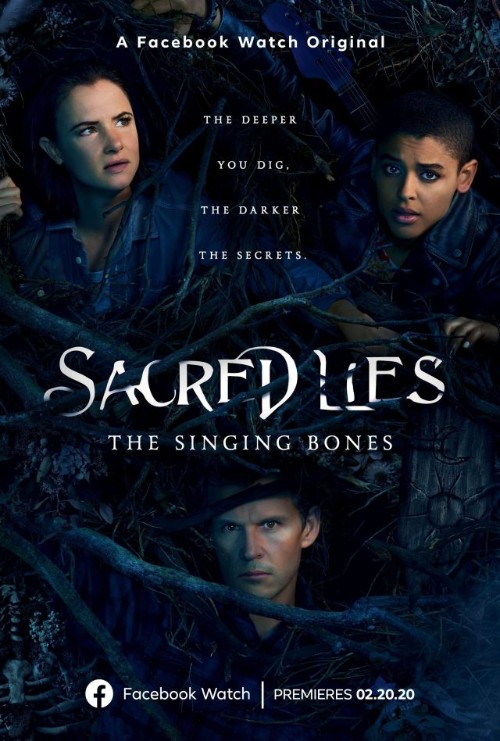 The series is based upon the classic Brothers Grimm fairy tale “The Handless Maiden” that was updated in Stephanie Oakes’s 2016 young adult novel THE SACRED LIES OF MINNOW BLY.  The teenaged Minnow Bly is a Montana-based cult member who unexpectedly murders a young male stranger and is put into prison.

Oakes’s novel vividly depicts the oftentimes harsh realities of cults and the juvenile justice system.  Thankfully, many of the adult characters prove benevolent and the rehabilitated Minnow Bly is ultimately released from prison to strike out on her own in a bridge program for juvenile offenders.

Fans of SACRED LIES will be glad to learn that it has evolved into an anthology series written and produced by Raelle Tucker and Molly Nussbam.  The second ten-part installment, “The Singing Bones”, is based upon another Grimm fairy tale titled “The Singing Bone”. Colorado-based protagonist Elsie Silver (Jordan Alexander) is put disastrously into the foster care system after being abandoned at the age of three and must navigate her own survival until she is eighteen.

“The Singing Bones” is also a true to life murder mystery complete with two missing Jane Does.  These sirens turn out to be to be beautiful blonde sisters with some mysterious degrees of separation from Elsie.  The phenomenal Juliette Lewis plays a volunteer who relentlessly pushes the local police to apprehend the unknown murderer.

The pursuit of the truth no matter how painful it might be is a constant concern in the SACRED LIES series.  “I guess people can’t be content without answers, even if they’re wrong”, surmises Minnow Bly. “We’d rather have a lie than a question that we can never know the answer to.”

In this reporter’s opinion, the impressive acting, writing, and production values set the SACRED LIES series far apart from the myriad of paint by number young adult programs now available on major network and cable stations.  The modern-day rural settings in both installments allow for plausible reinterpretations of the original hazard-filled Grimm fairy tales. “The Singing Bones” should engross young and mature adult audiences alike.

If your curiosity has been piqued, be sure to check the Facebook Watch site on Thursdays for the next several weeks to view new half-hour episodes of “The Singing Bones” completely free of charge.  The series just launched on Thursday, February 20th, 2020 with video postings of the first three episodes. Viewers are invited to dialogue with the online SACRED LIES community throughout the run of the series.