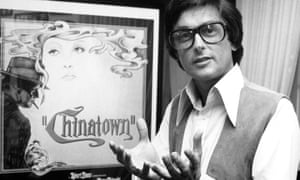 Robert Evans, the Paramount executive who produced “Chinatown” and “Urban Cowboy,” and whose life became as melodramatic and jaw-dropping as any of his films, died on Saturday night. He was 89.

Even though Hollywood history is filled with colorful characters, few can match the tale of Evans, whose life would seem far-fetched if it were fiction. With his matinee-idol looks, but little acting talent, Evans was given starring roles in a few movies and then, with no studio experience, was handed the production reins at Paramount in the 1960s. When he left the exec ranks, his first film as a producer was the classic “Chinatown,” and he followed with other hits, like “Marathon Man” and “Urban Cowboy.” Eventually, his distinctive look and speaking style turned him into a cult figure, and he had the distinction of being the only film executive who starred in his own animated TV series.

Evans began his career in a successful business venture with his brother, selling women’s apparel. In 1956, while on a business trip, he was by chance spotted by actress Norma Shearer, who thought he would be right to play the role of her late husband Irving Thalberg (appropriately, another film mogul) in Man of a Thousand Faces. Thus he began a brief film acting career. In 1962, Evans decided to go into film producing instead, using his accumulated wealth from the clothing business, and began a meteoric rise in the industry; he was installed as the head of Paramount Pictures in 1967. While there, he improved the ailing Paramount’s fortunes through a string of commercially and critically acclaimed films. In 1974, he stepped down in order to produce films on his own.

In 1980, Evans’ career, and life, took a downturn after he pleaded guilty to cocaine trafficking; over the next 12 years, he produced only two films, both financial flops: The Cotton Club and the Chinatown sequel The Two Jakes.[1] In 1993, he began to produce films on a more regular basis, with a mixed track record that included both flops (such as Jade in 1995) and hits (such as How to Lose a Guy in 10 Days in 2003, his final film credit).
(Wikipedia)