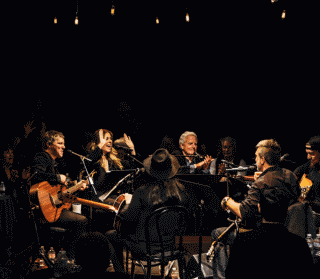 A Harmonious Evening of Songs with Songwriters

Westwood, CA (The Hollywood Times) January 14, 2019 – Actress/producer, Rita Wilson recently released her third album as a singer/songwriter, Bigger Picture, and was joined on stage in an intimate, cabaret-style setting at the Geffen Playhouse for a limited four-performance engagement (January 10-13) as her fourth Liner Notes Tour continues on. 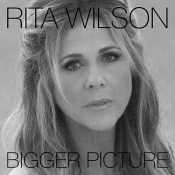 It was a night to hear hit music performed by the songwriter/musicians themselves – in the round.

Wilson is a striking woman whose captivating personality elicits applause when she hits the stage with award-winning friends in tow, she explained the title of her show: “I love Geffen audiences! As a kid and a teenager, I’d spend hours and hours lying on my bed, holding up my record albums, reading the liner notes – I pulled out from the album’s sleeve – explaining how each song was written or recorded. I would learn all the words to these songs that expressed exactly what I was feeling. They were like a little road map of human experience.”

The cozy nightclub atmosphere generated was the perfect backdrop as the songwriters began telling stories about their songs before singing them. Wilson’s inspiration for Heart He Handed Down came from her father. She said, “I never knew that my dad had been married before my mom. I had never known that his wife died in childbirth and the baby died four months later on December 26th.” Wilson divulged sorrow was the root of her father’s decision to immigrate to America where he would eventually find and marry Wilson’s Greek immigrant mother. He endured escaping Bulgaria to Turkey before shoveling coal on a freighter to make his way here and she discovered the importance of so many generations of family birthdays on December 26th – after her father died. She said, “I thought when I was writing this song, if my dad could keep this vision for a better life in his head and risk his life in order to get that, then it is possible that ambition gets handed down to your kids and then to your grandkids. So I wanted to write that really for my children, to really let them know that they come from a line of courage.”

Rita asked the audience if anyone had had breast cancer, a few hands went up as she revealed she is a breast cancer survivor. Wilson then sang the song she wrote should she leave the world before her husband (you know that guy) asking him to “throw me a party” and “dance like I’m still there” as the audience thunderously clapped along. A beautiful way to say goodbye in celebration of loss by acknowledging one’s life with exuberance.

Red Solo Cup was easily the funniest song of the night and one that wasn’t meant to be heard. The Warren Brothers (Brett and Brad) wrote it as a joke, Toby Keith made it a hit and it’s one of their most downloadable songs. The brothers are one of the most sought after writing teams in Nashville and their easy banter with Wilson, Steinberg and Knight along with their beautiful harmonies – on songs shared – made the two-hour night even more remarkable – as if that were even possible.

Holly Knight, a powerhouse of the 1980’s rock radio scene – much of the night’s music played came from the 80’s. She created several hits for Tina Turner and revealed that Turner’s life will be a Broadway show coming this fall. This prolific songwrither helped define the sound of rock radio of the time. A hit for Pat Benatar – Love is a Battlefield – Knight jokingly said, “I’d like to dedicate this song to my three ex husbands.”  Better Be Good to Me Turner recorded after her break-up with Ike, Knight says, “Tina loves The Best as her favorite and said it’s what she wants to be remembered for (as a signature song).”  Knight’s songs have heart, muscle and soul to them.

Billy Steinberg with a simple acoustic guitar told the story of how before Madonna came along – It’s A Virgin almost didn’t get made (which he wrote with Tom Kelly) due to the word record companies were offended by. That started a round-robin of jokes amongst the musicians. Billy told his Bob Dylan story about meeting his idol at a party and feeling star-struck but he tried to elicit more than a few grunts from him and shockingly Dylan said, “Is that why you wrote True Colors?” A stunned Steinberg seemed pretty set for life on that recognition as he smiled widely. Steinberg then played True Colors and slayed it.

The lively, nostalgic evening is Wilson’s current reiteration of Liner Notes having had other equally renowned panels of singer/songwriters with her in the past. Wilson’s music is part pop, folk and leans into country. Bigger Picture she co-wrote with mostly a Nashville crew and the Warren Brothers were an integral part of it along with record producer, Fred Mollin (Johnny Mathis, Kimmy Webb and Kris Kristofferson). Wilson last worked with Mollin on her 2012 singing debut album, AM/FM.

Rita has leapt into the last chapter of her life as a multi-faceted artist with a boldness that resonates with her voice and words. This behind-the-scenes with backstories to your favorite songs is a solid hit wherever it goes. Look for her return and upcoming shows at:

www.GeffenPlayhouse.org and visit Rita’s website for other tour dates and information: http://www.ritawilson.com/