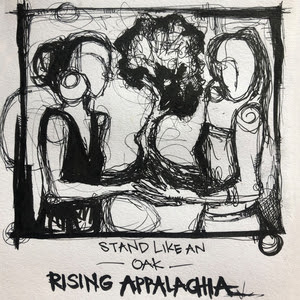 Rising Appalachia Release Uplifting New Song, “Stand Like An Oak” and announce “A Conversation with Rising Appalachia,” a livestream fan meet & greet for Friday
April 22, 2020 – Asheville, NC – Long now stewards of resilience, sisters Leah Song and Chloe Smith, better known as the frontwomen of Rising Appalachia, know when to raise their voices and demand to be heard, but also when to harmonize softly, focusing messages of support to the ears of those who might need it the most. “Stand like an Oak” is the latter. The first new music release since Leylines, “Stand like an Oak” features Rising Appalachia at their most intimate, encouraging listeners to “put away your cares” and “fold up your fears”; to “stand like an Oak” in the face of trying times—fitting in that this song is being released in conjunction with Earth Day. Yesterday, The Bluegrass Situation premiered a music video for “Stand like an Oak,” which finds Rising Appalachia deep in the song’s recording process at Asheville’s stunning Echo Mountain Recording studio. Watch the video here.
“Now, in the time of corona, we are seeing the necessary roles of music and healing practices in our abilities to see through this pandemic and stay steady on our course of compassion and strength,” says Chloe. “I wrote this song for a loved one going through the wave and arc of depression and anxiety, someone whom I wanted to sing a reminder to, to find her roots and footing when the wind blows strong. Mental health is a gripping mountain for so many people to climb, and this song honors that journey as well as the people who pull us up out of it. Leah adds, “‘Stand like an Oak’ is a song to remind us of our innate sturdiness and deep roots in this vital dark soil of Earth; the innate presence and stability of the Oaktree as our model and muse of calmness in the great storms.”
“In a time of so much unknown and anxiety around what is to come, we must remember that we always have the tools of the deep ground beneath us, and the ritual for rushing waters to wash away that which does not serve us,” says Leah. “Lean into this quiet earthly realm to fortify and strengthen. ‘Leave it by the angels of the water…’”
Also announced today is Rising Appalachia’s online meet & greet for Friday, April 24th. Titled “A Conversation with Rising Appalachia,” fans can make a ‘pay what you can’ donation and join the band for discussion and song—a digital version of what so many fans take part in while the band tours. “Our meet & greets are ways that we were able to gather before concerts each night to get to know pieces of your stories and deeper stories of place before we take to the stage. Obviously this time there is no stage, just the possibility that we can have a dialogue and dig into some deeper conversations about our work at large, the meaning of these times, and how we can continue to strategize together,” says the band. Fans can expect to hear poetics and songs from each band member, resilient strategies, and ideas on adapting to a new normal. Want to join in on the conversation? All details can be found here.
Donations from Friday’s meet & greet will be gratefully distributed to the working musicians on Rising Appalachia’s team who are currently trying to find a new way to share art. Additionally, 10% of proceeds will be donated to The Dogwood Alliance in honor of Earth Week and their diligence to protecting our planet.
For other isolation ideas, if you haven’t yet seen Rising Appalachia’s Tiny Desk Concert which features songs from Leylines, their most recent record, might we suggest checking that out on NPR Music.
More About Rising Appalachia: Sisters Leah Song and Chloe Smith, known musically as Rising Appalachia, are just as much stewards for their earth and its peoples as they are musicians.  Framing their foundation of traditional American music with West African n’goni and Celtic-Irish fiddle, Rising Appalachia have landed on something that has the potential to grow its own roots, rather than leaning on one particular past—folk music from different corners of the world all working together as one, used as a sharpened tool for cultural and environmental preservation and education.
Their newest album, Leylines, has been a defining record for the sister-led band, garnering praise from a wide swath of critics and solidifying their place in the greater Americana musical movement. Brooklyn Vegan called “Speak Out,” one of the album’s standout tunes featuring Ani DiFranco, “an appealing dose of fiddle-fueled folk and close harmonies.” NPR praised album closer, “Resilient,” as an “uplifting, original folk anthem” and Rolling Stone called their sound “protest music for the modern age bolstered by delicate, skillful musicianship and otherworldly vocal harmonies.” On Leylines, Leah and Chloe are joined by longtime members David Brown (stand-up bass, baritone guitar) and Biko Casini (world percussion), as well as two new members: West African musician Arouna Diarra (n’goni, talking drum) and Irish musician Duncan Wickel (fiddle, cello). The sonic textures of these two cultures are woven into Leylines, enhancing the stunning blend of folk, world, and urban music that has become Rising Appalachia’s calling card.