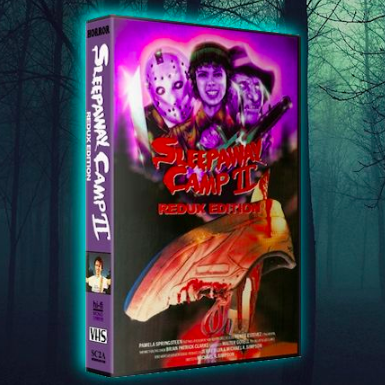 The original version of “Sleepaway Camp II” was directed by Michael A. Simpson and released to home video in 1988 by Nelson Home Entertainment. “Back in 2015, I was asked to direct the original scripted ending for ‘Sleepaway Camp II: Unhappy Campers’, which revealed Molly’s intended, but never filmed, death scene”, says Ferguson. “It was released as a ‘Special Feature’ called ‘Whatever Happened to Molly?’ on the Official Scream Factory Blu-Ray release of the film.” 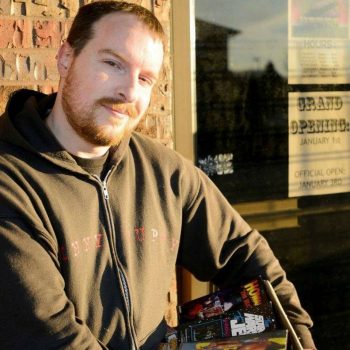 Three years later, Ferguson was approached again to film another new scene, this time for the movie’s 30th Anniversary VHS re-release. “John Klyza, who runs Retrosploitation Releasing, asked if I would be interested in gathering a crew together to go shoot a scene that would be the ‘visual’ for ‘T.C.”s campfire story during the opening of the film,” explains Ferguson. “This segment was called “Steve and Michelle Go to Hell” and it wrapped shooting in June 2018 in Compton, California.” Continues Ferguson, “We went to the same mausoleum used in ‘Phantasm 3, 4 and 5’ and introduced ourselves to the Caretaker. He was very kind and allowed us to film inside, and we also shot some scenes out in the cemetery behind the building. It was a strange yet amazing feeling to be filming for a ‘Sleepaway Camp’ film on a ‘Phantasm’ location…talk about horror-nerd overload!”

The segment in its entirety will be released on its own online to help promote the release. Portions of both “Steve and Michelle Go to Hell” and “Whatever Happened to Molly?” are incorporated into the new release of “Sleepaway Camp II: Redux” itself.

Ferguson is no stranger to the “Sleepaway Camp” franchise. In 2008, he was hired to edit 1992’s unfinished “Sleepaway Camp IV: The Survivor” for Films Around The World. It was the beginning of a long career involving work in several well-known and respected Horror and Science Fiction franchises. He’s also directed “Nemesis 5: The New Model”, which was executive produced by Albert Pyun (“Mean Guns”, “Cyborg”). He made two entries in the infamous “Camp Blood” series for Sterling Entertainment, and in 2016 he also edited the extended and unrated version of 1987’s “Slumber Party Massacre II”, which hit Blu-Ray in early 2017. Along with a slew of additional “Special Feature” work for Scream Factory (including contributions to “Piranha 2”, “Darkman 2”, “Silent Night, Deadly Night”, “Texas Chainsaw Massacre: The Next Generation”, “Dawn of The Dead”, “Return of The Living Dead II” and several others), Ferguson has also directed two “Amityville” films for Wild Eye Releasing, the latter starring Mark Patton of “A Nightmare On Elm Street 2”, and also “Silent Night, Bloody Night 2: The Revival” which starred Jennifer Runyon Corman (“Ghostbusters”) for New Wave Pictures. Please check out the Sleepaway Camp: Analog Apocalypse Trailer at: