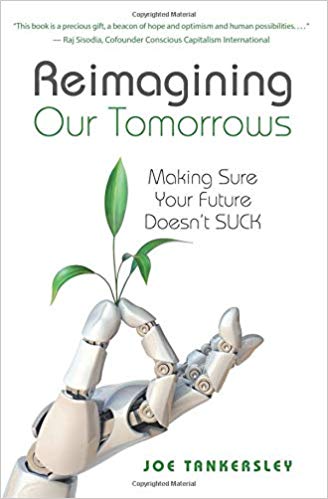 Hollywood, CA ( The Hollywood Times) 10/16/2018- “They had hope. Hope that our true nature was to be generous and caring. Hope that most people wanted to belong to something bigger. Hope that dialogue could create community,’’  book Reimagining Our Tomorrows by Joe Tankersley offers a different and unique view of what our future might look like if we focus of positivity, community and humanity. 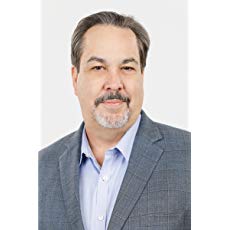 We’ve all seen dark dystopian movies that paint pretty morbid picture of what could happen to our planet in less than a few decades. Sometimes looking around and realizing all the current problems and issues our society is dealing with it seems that the reality isn’t that different from gruesome worlds created by Hollywood screenwriters and movie directors. Joe Tankersley, however, paints a different picture. Brighter and more hopeful.

A new generation of pioneers transforms abandoned suburban malls into vibrant eco-villages where the town meetings are the best party around.

Passionate solo-preneurs take a break from crushing it in the new gig economy to brainstorm the perfect virtual reality Burning Man Moon raver with the help of their personal smart agent.

Micro-entrepreneurs defeat the tyranny of algorithm-driven media, make fake news obsolete and bring back the power of the local press.

All these wonderful and inspiring things are made to seem possible and realistic due to enthralling characters and their unique stories. Joe Tankersley crafts engaging vignettes that explore different situations and circumstances such as aging, consumerism, automation, technology access, suburbia, rural life, sustainability and community.

I interviewed Joe and we talked about the inspiration behind Reimagining Our Tomorrows, as well as about all the exciting possibilities that future might hold for people.

What made you write a book and what was the journey like from the moment you got the first idea until the moment it was finally published?

So I actually started writing a book that was a traditional book about how businesses could use foresight as a tool to create change because I’m very interested in in groups that want to create change. But that lasted for about a chapter and at that point I realized that wasn’t where my heart was, that what I am really passionate about is trying to get communities and individuals to really engage with thinking about the future in a different way and that combined with the fact that my background is a storyteller- that’s what I’ve done most of my life, it just made sense to me to take a different approach and write a book that was a series of stories and that all started in the spring of 2017.

Even though I was a writer my entire life- I worked on screenplays, written stuff for theme parks but I never sat down and wrote a book before. I imagined it would be easy. It took about a year and a half and for me, the way I approached it, there were certain topics that were really important to me that I thought needed to be addressed. Things like the future of automation or what it is to grow old in this country are pretty negative and so those were obvious ones and I wanted to address those stories. The other piece was that each of the story has to have a character associated with it, so it was driven by this character. And then I began to create a vision around moments in their lives and most of them are meant to be-  they succeeded, things are working, let’s explore what that would look like. So many revisions later I had a book.

How did your former experience at Disney help you in terms of coming up with ideas for the book?

Well it truly inspired the whole approach to the book.  As a storyteller for Disney, the stories we told were always about how do we find the optimistic future, you know, we believe in that and so I learned more on how to do that over the years. So that certainly had a major impact. There was even a deeper impact and that was while I was at Disney, mostly why I discovered this idea of optimistic futures and that was while I was doing some research around the life of Walt Disney and really understanding his message which always was “We can create a better tomorrow and one of the best ways to do that is tell us about the future. “ And that was really the inspiration.

There is this saying that people don’t realize how much power they have and if everybody decided not to go to work tomorrow, the economy would literally collapse. In your book, you kind of touched that subject a little bit. You talk about solo-preneurs and small businesses and basically getting rid of big corporations and the power of individuals. Can you elaborate on that?

Sure. I’d love to. My vision of the future is that right now we struggle to revive businesses and capitalism and large corporations. That is driven by a couple of things. One of them is in technology. The digital world is changing the way we think about business and quite honestly what we’re seeing is the end of the industrial age. And the industrial age privileged large organizations because that’s what it took to accomplish anything. You’d have to have a huge company if you’re gonna build cars or washing machines or anything else. Now what we’re seeing is technology giving power small groups of people, individuals and small companies, way more power to do much bigger projects and to reach more people. And what I see is that it opens up a lot of opportunities for people who in the past might not have had these opportunities.

Do you believe we as individuals are responsible for the quality of our lives and our future and if yes, to what extent?

Well, to a certain degree, yes. I think we all have to take responsibility.  I think the digital future, those who succeed will be the launch to take much more responsibility for making their opportunities or their education. That is both an opportunity and a burden at the same time. It’s clear that everyone doesn’t have the same opportunity. One of the potential policies that as the cost of technology access continues to go down, we can broaden that one opportunity.  For example- you can get free courses from the biggest universities in the world and you don’t get a degree, but you certainly have access to that knowledge and that didn’t use to be true and as long as we can make access to more people, then yes, I think it’s fair to say we’re going to be responsible for what happens.

In most of movies back in the fifties and sixties they predicted that by now we would have flying cars. What’s your take on the evolution of cars?

We’re still waiting for flying cars. Cars are certainly getting smarter when we talk about autonomous vehicles, we have this image of just being completely self contained and doing everything by themselves with no human interaction ever probably get to that point. But I think what’s more remarkable is how much of the driving they’re already assisting you with? I rented a car recently and was driving down the road and I came too close to the middle line. Suddenly the car started steering back the other way . When I realized it was assisting me in what I was doing I became more comfortable with that. Will we ever have flying cars? I think the problem with flying cars is that nobody really wants them. It sounds fancy but at the end of the day I think they would be more trouble than anything else. Will we have cars that will do more of the workforce? Yeah. But to me the bigger question is, will we start to create a society that doesn’t require personal automobiles as much?

I have talked to people from different generations and more and more people say “I would love to live someplace where I can walk most of the places, get a ride share or rent a car or something like that.” So of course they’ll get smarter, but at the same time I think there’s potential they will become less important.

Your description of human and robot relationships seemed very realistic and obviously we’re headed that direction. What is the key element in making human- robot coexistence possible?

Well, the robot cooperation in the future, I would think it’s probably closer than we imagine just simply because we’re already starting to see it happen in some particular workplaces. And most of the evidence suggests that it’s a natural progression. Japan is a great example. They had a huge shortage for health care workers. So they’ve already introduced robots and they’re finding that in general people react to them positively. I think the problem is just goes back to the storytelling piece. The best stories that excite people is where for the machines take over, the robots are dangerous. I just don’t see that happening because we’re the ones who make the robots .

On your website I saw that you also have workshops and consulting. Can you tell me more about it?

Oh, I’m glad to tell you about that. So the workshops that I do, helping groups and organizations and communities create their strategic narrative for the future. The idea is really understanding the trends and what they need, what are the driving forces behind. And then from that start to craft a vision of the future that is what this group wants the future to be and is also based in reality. We use that narrative and this goes back to the Disney experience. We use narratives as a guide to create. And so that’s what I want to do is to use the narrative as a guide, it raises questions and tells you which direction they should go to. So that’s the bulk of what I do in terms of consulting.

My final question– what do you think we should change in order to make our future better?

Once again, for me, it really is about the stories that you tell and there’s a real challenge there because as you said at the beginning, the Hollywood mainstream approach to telling stories about the future tends to focus on dystopian futures because that’s exciting and it’s a great place to create a hero’s journey and all those other great stories. So what we really need to do is focus on how to find another way, how to tell a different kind of story that still is exciting and interesting, but gets us to believe that we can actually create the future and not just have to be in this world where we’re lucky to survive.

Amazing. Thank you so much for your time.