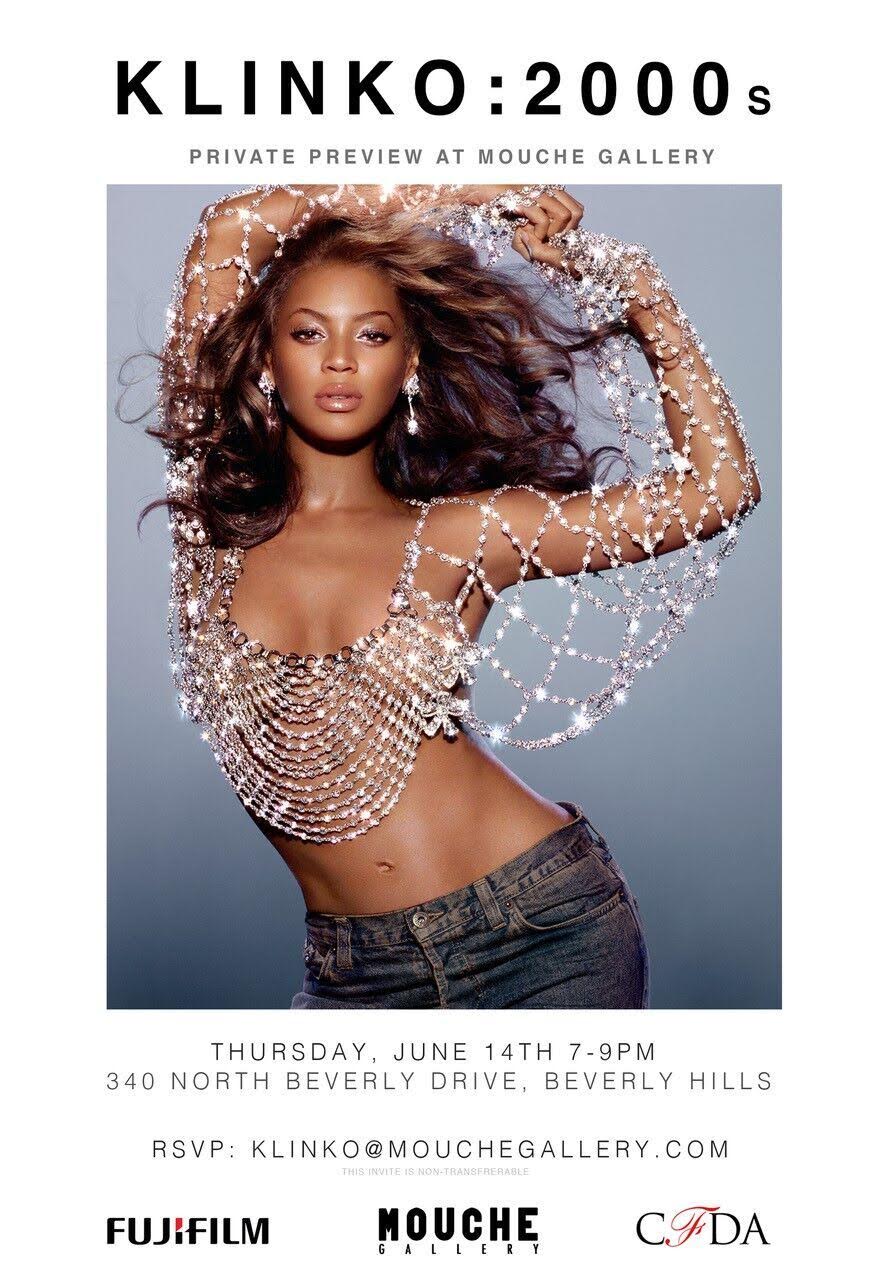 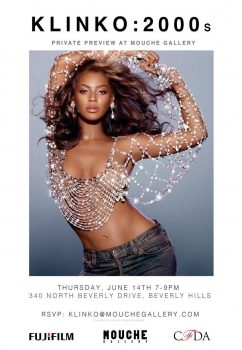 Los Angeles, CA (The Hollywood Times) 6/12/18 – Jimmy Steinfeldt: How often do you clean your lens?

Markus Klinko: Really never. I am at the very cutting edge of technology so my lenses don’t get dirty. I’m collaborating closely with Fujifilm. I help them develop prototypes and do marketing. I’m a very nerdy technical person. I spend many hours testing camera and also lighting equipment. I give feedback and write articles for DP Review, PetaPixel, and Luminous Landscape. Fujifilm makes the best cameras in the world and I’m not just saying that because I work with them. I let them sponsor my exhibits because I believe they make the best cameras, in particular the medium format Fujifilm GFX. 50S.

The ergonomics of the camera are great and it comes with a tiltable viewfinder. I began my career using manual focus cameras but the GFX has 425 focus points which allows amazing auto-focus capabilities. I don’t have to recompose after the camera has selected the proper focus. In that fraction of a second when you recompose your subject’s expression may have changed and recomposing will also effect focus. The difference between a mediocre shot and a great shot is 100th of a second. 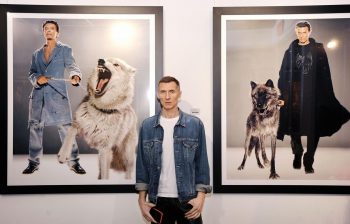 I do believe in manual settings which I use all the time. Mirrorless cameras are definitely the way to go now. Who needs a sloppy, clunky mirror especially when today’s mirrorless camera bodies and lens are lighter weight. Also I think in the next two to three years we will see global shutter, everything will be electronic no more mechanical shutter. We will not have any concern with flash sync. This will be helpful when shooting directly into the sun. I love shooting my subjects with the sun directly behind their head to get that classic beautiful halo effect almost like a religious image. I also use Chinese made flash lighting, Flashpoint/GODOX that are fairly light with lithium batteries.

JS: What photographers influenced you? 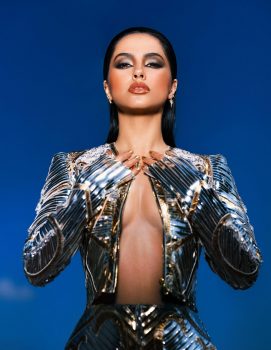 MK: Helmut Newton and Guy Bourdin are really the two major photographers I look to. They ruled the 70s and 80s. I also think their work from decades ago still seems current. Virtually all their photographs are great however Newton’s work in the 90s became much less good. The pool at the Chateau Marmont was the location for so many great Newton shoots. I’m grateful I got permission to shoot at that pool. I was in the place where greatness had been created so many times in the past by Newton.

He worked very simply. Not many assistants. He also coached his subjects one on one. You can even see his process on Youtube. I’m doing shoots that are very pared down. I like to do all the lighting myself. I do have my assistant help with things for the client and helping the makeup artist if needed but I like to handle the lights myself. With the new lighting system it’s very easy to do myself.

I write articles describing what equipment photographers should use (cameras, lighting, grips, stands, etc). I’m very into all the technical and equipment side of photography. For instance I love Matthews studio equipment. They are a California company making great things for photographers.

Everything I produced up to 2013 I did on my own. Since then I’ve been working with Koala. We call ourselves Markus&Koala. Koala and I shoot at the same time. We just shot Becky G for Vogue. Some of those images will be in the exhibit at the Mouche Gallery this week in Beverly Hills. Becky G will be hosting the event and Koala will also DJ. 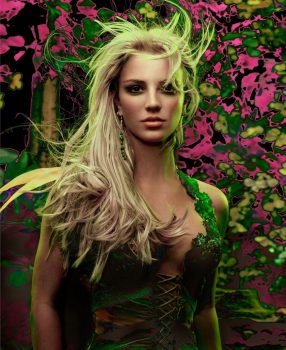 Koala is a young photographer and her perspective is different then mine. She is into the new social media and so her influences are very current. I look at new photography including Instagram yet I am very much interested in the history of photography. I especially like the fashion photography of the 1970s. I’m not a minimalist at all. I’m into the very glamorous, sexy, glossy thing. Modern editorial requires some adjustment and I do enjoy natural light and street fashion yet I really prefer big productions.

Right now photography is under attack. Instagram is good however advertisers and brands have shifted their advertising budgets to social media and away from print. Many magazines are dying. Interview magazine just went out of business. SPIN and Rolling Stone have about 20 pages now. It’s just a matter of time before there will be no more print magazines. That’s sad.

JS: Who and what besides photographers has influenced your photography? 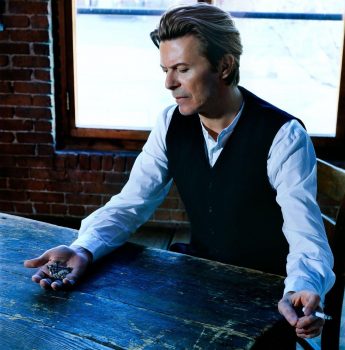 MK: Everything! Movies like Blow-up, my favorite of all time. I like to fantasize I’m like the crazy, intense photographer in that movie. That movie really inspired me. I also like the movies Eye’s of Laura Mars, and Funny Face. Also music, everyday life/encounters. Something I see in the street or in a magazine. Also I have a library of stored images from the times I was living in Paris. Looking back on those can be helpful. I look at Instagram all the time and Twitter. I stay up to date with what’s new. I see things on social media that I love but most of the time not.

JS: What was your first camera?

MK: When I decided to start photography in the mid 90s my dad sent me a Nikon from the 1970s.  I practiced with it for a couple days. Then I had a couple of Hasselblads. Then I quickly changed to Mamiya where I became an ambassador and spokesperson. Around 2000 I started using a Fujifilm camera the GX680 III. It was a 6×8 film camera with lens movement almost like a 4×5 camera. It became my favorite camera. I even built custom grips for these cameras. Later around 2004 I created an adapter so I could attach a Leaf digital back. This had 22 megapixels. That was huge at that time. I go back 20 years with Fujifilm. I also worked with Fujifilm using and promoting their digital printers in those early days. 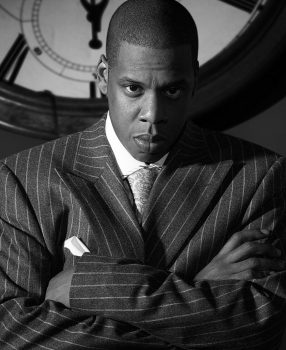 MK: I am working with the legendary Hollywood lighting company Mole-Richardson on many levels. They have released in the last few years state of the art LED Fresnel lights that run on household power. No more do we need five gaffers. Continuous light is a beautiful light although I 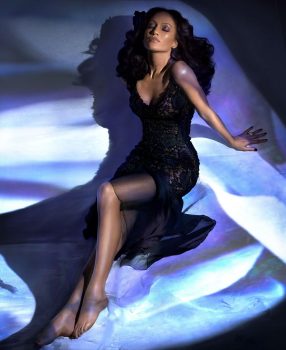 JS: Did you ever do stills for movies?

MK: No. I’m not sure I would enjoy that because I like orchestrating my own pictures. I admire people who do that including Douglas Kirkland who has worked on about 200 movies. He took many iconic pictures on movies sets.

I like movies and I directed one of the last videos for David Bowie. I like to be in charge. I probably would have saved myself a lot of trouble and money if I had assisted and learned some tricks before I went on my own. I like to direct everything. Hair, makeup, styling, story, content. I need to be the boss. If I’m not I don’t have fun. It’s not ego, it’s just my character. I need to do my own thing.

JS: Is there anyone you would like to photograph? 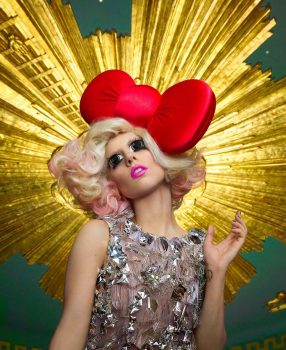 JS: Please tell me about the CFDA.

MK: They produce New York Fashion Week. It’s the group of American fashion designers, Calvin Klein, Donna Karan and all the greats. They are very focused on Los Angeles right now. I met with the president of the CFDA and proposed a collaboration and they went for it. They are auctioning my photos to benefit young designers in California. Gypsy Sport NY just received the Vogue fashion award. Rio, the designer, will be part of my upcoming exhibit. He is dressing my photo partner Koala.

JS: What advice would you give a young person who wants to pursue photography as a career? 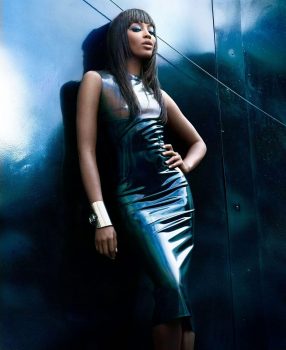 MK: Don’t become a photographer. I’m just kidding but it is a hard career. One of the hardest you can imagine. It’s hard to be an actor or a pop star but it’s really hard to be a photographer. It’s a very cutthroat business. There’s no loyalty from clients and magazines now a days. No matter how many iconic photos you’ve shot or multi million dollar campaigns you’ve done everyday is a new day. Everyday you are competing with hundreds of thousands or million of photographers.

Some ad campaigns request photos from the public. They pick the one they like best and give the photographer credit but pay nothing. The level of technical requirements has dropped so much that virtually anyone with a digital camera can do a brand campaign. Today there are low expectations. If your photo is somewhat in focus and somewhat framed up, a logo can be slapped on it and it’s accepted. This chips away at the idea of a high priest of photography that used to exist with someone like Helmut Newton or Richard Avedon. I miss those days when the great photographers were like rock stars. 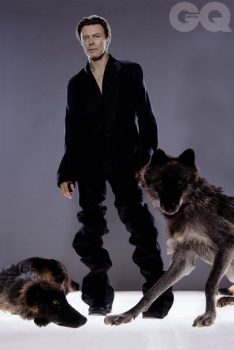 JS: You were often photographed during your career as a world renown musician. Did that help you empathize with people you photograph?

MK: Yes. I know what’s it’s like to need an image to communicate to the public. What it’s like to promote a musician’s new songs or an actor’s new project. It helps make me a ‘partner in crime’ when I work with a great talent such as Beyonce or Jennifer Lopez.

JS: What’s next for Markus Klinko?

MK: I’m focusing on Thursday and the three weeks following the opening. I’m proud to have my big show at the Mouche Gallery. Mouche has exhibited the work of many photographers like Douglas Kirkland, Terry O’Neil and others.

I will conduct six seminars with Fujifilm at the Mouche Gallery. The subject will be mirrorless cameras and High-Speed Sync (HSS.) My “2000’s” exhibit is going to Shanghai.  I’ll be doing big photo shoots in July and August. Also I have a very special exhibit of my David Bowie photographs at the most prestigious art fair in the world. Art Basel in Basel, Switzerland. They are doing a special feature of my work at the entrance to the fair. This occurs this coming week the same time as my big event in Beverly Hills. This is a big week for me! 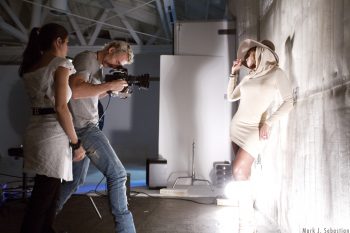 For more info on Markus: