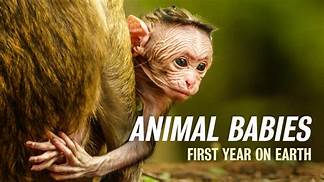 Here is a Sneak Peek Clip Courtesy of PBS: Baby Safina Is On The Move And Takes A Tumble 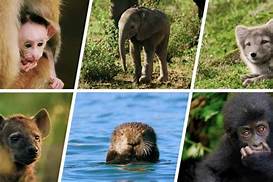 ANIMAL BABIES: FIRST YEAR ON EARTH, a new three-part series co-produced with BBC Studios, premieres Wednesdays, August 28 – September 11, 8:00-9:00 p.m. ET (check local listings) on PBS. The series follows four wildlife cinematographers as they capture the first year of life for six animals across four continents, navigating the challenges they face and how they overcome them.

From the largest animal baby on land – the African elephant – to the smallest marine mammal – the southern sea otter – viewers will follow these creatures as they explore the complexities of their respective habitats. Cinematographers Sue Gibson, Vianet Djenguet, Colin Stafford-Johnson and Bob Poole cast a new light on these mammals and how human actions and interference impact how they survive.

“We’re pleased that our partnership with BBC Studios has once again pulled audiences into the most remote and beautiful places of the world and allows them to experience such special moments in animal life,” said Bill Gardner, Vice President, Programming & Development at PBS.

In their first year, these infants experience the joys and hardships of life. They confront near daily adversities from rivals, the elements and predators, which makes their first year their most dangerous. An overview of the series is as follows:

The first three months of life mean that these infants must quickly understand their surroundings. Newborn elephant Safina must keep a quick pace to keep up with her fast-moving herd in Kenya. Jazir, an infant toque macaque, learns tough love within the primate society as it intertwines with humankind in Sri Lanka. Limpet the southern sea otter encounters the difficulty of a deep dive. Fela the Arctic fox understands the true meaning of sibling rivalry when the large litter has limited food in Iceland. Bisque and Chowder, spotted hyena sisters, prove their worth in the clan in Kenya. Nyakabara the mountain gorilla must find her way through the ancient Ugandan forest. The most basic tools for survival must be learned in their first three months to thrive and ultimately survive.

After their first three months of life, these young creatures face new challenges once they can get around on their own. Searching for food becomes the main concern, and the impact of their environment begins to take its toll. In California, Limpet the sea otter learns what is safe to eat. In Sri Lanka, Jazir the macaque learns to toughen up when his mother stops coddling him. In Kenya, Safina the elephant tries to connect and bond with her new family members. These growing babies face trials and tribulations constantly, as they have new challenges to conquer each day.

The babies near the end of their first year on Earth, which often brings the toughest challenges. In Uganda, Nyakabara the mountain gorilla roams freely in the forest and must navigate its complexities. In Iceland, Fela the Arctic fox faces rejection from his mother and becomes entirely independent in the search for food. Back in Kenya, spotted hyena twins Bisque and Chowder come to understand the danger of entering the lion’s den. It’s time for these young ones to branch off from the comfort of their mothers and learn to explore the great unknown on their own.

ANIMAL BABIES: FIRST YEAR ON EARTH is a BBC Studios production for PBS and BBC. The series is executive produced by Jo Shinner with Dominic Weston serving as series producer.

Ever since Sue was given her first camera at age seven, she’s been passionate about photography. She’s always loved wildlife and exploring partly because her family lived in Malawi for six years before she was born, so her home was full of interesting items that sparked her imagination and set her dreaming of visiting distant lands. Pursuing a career in wildlife filming seemed to be the ideal path to fulfil those dreams. Sue has been in the industry for over 15 years and filmed in desert extremes in Oman, tracked Pallas cats on the Mongolian Steppe, hung out with apex predators in the Maasai Mara and filmed in some of the roughest seas around Cape Horn.

Vianet Djenguet is a documentary and wildlife cameraman with over 12 years of experience filming for major international broadcasters, including the BBC and National Geographic. He has extensive experience working in some of the world’s most remote and hostile environments, ranging from tropical and equatorial jungles, swamps, deserts and mountainous regions to tropical islands. Vianet was born in the Republic of Congo, a country all too often associated with civil war, but Vianet has always wanted to reveal the rich wildlife of the country. His dreams came true when BBC Natural World commissioned a one-hour documentary called “My Congo,” where Vianet ventured in front of the cameras for the first time.

Colin Stafford-Johnson grew up on the east coast of Ireland and spent his childhood exploring his local woods and rivers and hills. His passion for natural history developed at a very early age. As soon as he left school, he backpacked around the world for six years in search of the creatures he had read about as a child. This all culminated in a desire to document the kinds of creatures he has seen. He settled down to study biology and filmmaking at university. He began an apprenticeship with a wildlife cameraman the day after he completed his studies and has been working in the industry ever since, not just as cameraman but as producer and director too. In 2018, his documentary “Wild Ireland – Edge of the World” won the prestigious Grierson Award for Best Natural History Film.

Bob Poole grew up in Kenya, where he began his relationship with National Geographic as a teenager while working on a film about elephants. With a university degree in science, he became a cinematographer for National Geographic starting with a film about his sister, Dr. Joyce Poole, the renowned elephant zoologist. Now an Emmy Award-winning director of photography, his extensive credit list includes shows for PBS, BBC, Discovery and over 35 projects with National Geographic. Bob works around the world, but his passion for wildlife conservation has taken him to some of the African continent’s most remote locations.

PBS, with more than 330 member stations, offers all Americans the opportunity to explore new ideas and new worlds through television and digital content. Each month, PBS reaches over 120 million people through television and 26 million people online, inviting them to experience the worlds of science, history, nature and public affairs; to hear diverse viewpoints; and to take front row seats to world-class drama and performances. PBS’ broad array of programs has been consistently honored by the industry’s most coveted award competitions. Teachers of children from pre-K through 12th grade turn to PBS for digital content and services that help bring classroom lessons to life. Decades of research confirms that PBS’ premier children’s media service, PBS KIDS, helps children build critical literacy, math and social-emotional skills, enabling them to find success in school and life. Delivered through member stations, PBS KIDS offers high-quality educational content on TV – including a 24/7 channel, online at pbskids.org, via an array of mobile apps and in communities across America. More information about PBS is available at www.pbs.org, one of the leading dot-org websites on the internet, or by following PBS on Twitter, Facebook or through our apps for mobile and connected devices.