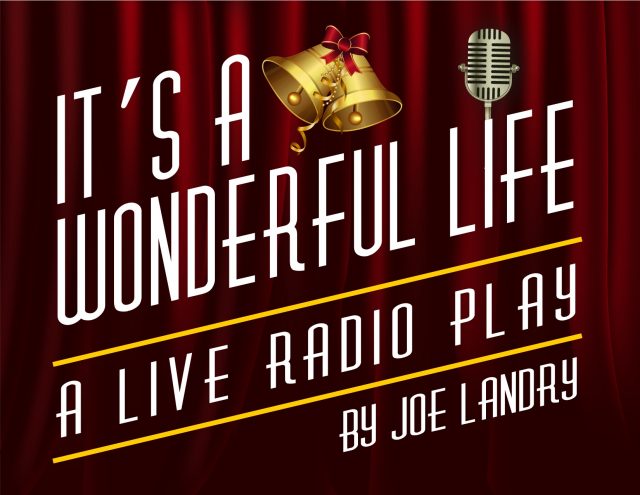 Pasadena, CA (The Hollywood Times) – 12/14/2018 – Versatile director – Cameron Watson – brings tremendous wit and verve to this holiday classic by giving his 5-person cast room to showcase their enormous talents – as they easily slide into multiple roles as needed. Watson’s show sparkles with a gusto that bridges the timelessness of the famous 1946 Frank Capra film to the live radio drama unfolding on the Pasadena  Playhouse stage – along with the surprising comedic moments that endear. It is A Wonderful Life, indeed!

The 90 minute dynamic ride is lead delightfully by Simon Helberg (The Big Bang Theory) as George Bailey (no easy task) – whose wish to never have been born is granted by Clarence – a guardian angel in need of his wings. Ryun Yu (PP’s Hold These Truths) inhabits Clarence and other male characters with his powerful scene stealing charisma. Rebecca Mozo debuts a beautiful and believable Mrs. Bailey. Haneefah Wood (Are You Sleeping) is exquisite in all of the other female roles while Rob Nagoe (Co-Artistic Director of the Antaeus Theatre Company) does narrator, the wretched Mr. Potter and daft Uncle Billy with equal aplomb and bring giggles as the Bailey’s younger boy.

Sound designer and Foley artist – Jeff Gardner has the difficult job of keeping everything going smoothly by creating every footstep, wind, doorknob turn or anything that needs to be heard with his very own unique rhythmic style.

We’re treated to two slap-silly and fun soap commercials strategically placed to break the show up.

Joe Landry’s script adaptation is perfection as we witness the actors create their world in a 1940’s radio station at the microphones while holding their scripts. The costumes are as befitting as the preshow Christmas music placing us back into the 1940’s. It’s dramatically underscored and hits every emotion.

George Bailey, a man who wanted to see the world and do something, be someone, make a difference manages to do so in spite of every setback, every devastating blow he is given but not without learning the lessons from his pal, Clarence. Who as we know, earns his wings.

The subject matter of both the film and the radio play are as relevant today as they were in 1946 – perhaps… even more so. Frank Capra’s messages relied on the everyman standing up and out and the community sticking together. Go see this show of hope and experience the restoration of human faith.

This cast got a well-deserved standing ovation… you’ll be on your feet applauding too!

Runs December 12 thru December 23, 2018 – 8PM evening shows except Sunday and matinees are at 2PM