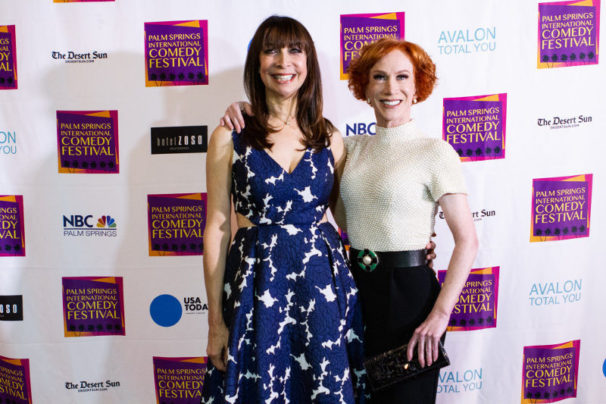 Recipient of the “PIONEER IN COMEDY AWARD” was presented to the accomplished Ileana Douglas, who earned the honor for establishing the first branded web series, “Easy to Assemble which ran as an internet series for four ‘seasons sponsored by IKEA. Douglas’ wrote the shows and dialogue, produced and starred in the show, which garnered acclaim, awards, and A list celebrity guest stars, such as Keanu Reeves and Jan Fonda.  The show ran for four “seasons.’ Ms. Douglas arrived at the red carpet event just a little after 6:30

Presenting the award were PSICFA board members, actresses/producers Karen Sharpe Kramer, and Katherine Kramer, wife and daughter, respectively, of the late Stanley Kramer, legendary director and producer. Stanley Kramer, who remains the most Oscar nominated filmmaker in history, made one comedy only: the raucous and enduring 1963 movie hit “IT’S A MAD, MAD, MAD, MAD, WORLD’, much of which was filmed here in Palm Springs.

COMEDIAN OF THE YEAR

The recipient of the “COMEDIAN OF THE YEAR” award was Kathy Griffin. 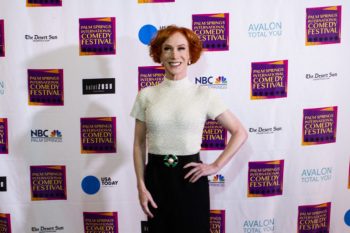 The Palm Springs inaugural festival continues with events on Saturday November 16, and Sunday Nov 17, with Celebrity Comedian Q&A, Stand-up Competitions, Headliner shows and After Parties. Details related to entering the Stand-Up competitions and all times and other details can be found here:   PalmSpringsComedyFest.com

“I feel certain that this annual event will continue to prosper, grow and take its place among the most significant international film festivals, marking another milestone in the cultural life, progress and prestige of our city”