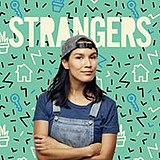 Los Angeles, CA (The Hollywood Times) 7/24/18 – Cast members Zoë Chao (Isobel) and Meredith Hagner (Cam) stepped out at the screening of the second series of Outfest 2017 hit, and Facebook TV series, Strangers. The first two episodes were screened, as writer/ creator Mia Lidofsky was still in the editing room for
episodes four and five.

Zoë and Meredith discussed the impact of season two being shot in NYC versus season one’s LA. “Well like they say about the Sex and the City, the city is the fifth woman”. The premise of season one being each episode a new “stranger” staying as a guest in Isobel’s and Cam’s house. After moving to New York, the structure of the series changed being based around the core relationship of the two LGBTQ women and the dynamic of their friendship.

Personally this screening was something I have been thinking about since first seeing season one. It represents so many types of people who consider themselves part of the LGBTQ
community, with such raw and honest humor, it a modern masterpiece and something which I hope paves the way for many more shows like it. Just what modern day television needs. I hope
to see it on wider platforms allowing many more people to access it.