Pasadena, CA (The Hollywood Times) 2/2/18 – OUR CARTOON PRESIDENT is an adult animated satirical television series from Showtime created by Stephen Colbert, Chris Licht, Matt Lapin, Tim Luecke, and R.J. Fried based upon a recurring segment from Colbert’s late night talk show.  It is set to premiere on Sunday, February 11th, 2018.

The half-hour cartoons attempt to open doors upon the Trumpian White House, a world in which no one is safe.  Jeff Bergman and Cody Lindquist voice the starring roles of President and First Lady Donald and Melania Trump.  Stephen Colbert guest stars as Sergeant at Arms of the United States House of Representatives.

President Trump and his staff are portrayed as a dysfunctional family in cartoon form.  Vice President Mike Pence has his own storyline along with certain members of Congress and Trump’s actual family members–Donald Jr., Eric, and Ivanka!

The purpose of the animated series is not to respond to the news cycle, Colbert explained at a TCA Winter 2018 press tour panel taking place on Saturday, January 6th at the Langham Hotel in Pasadena.  “It’s about what’s going on behind the doors of the most important house in the world.”

Other TCA panelists included executive producers Chris Licht and R.J. Fried.  Fried also serves as the show runner for OUR CARTOON PRESIDENT, which is produced by CBS Television Studios.

The ten-week series kicked off in timely fashion on Sunday, January 28th, 2018 with an episode called “State of the Union” wherein President Trump attempts to improve his low approval ratings by giving the greatest State of the Union address ever delivered.  Simultaneously, he attempts to improve the state of his union with third wife Melania during their wedding anniversary (“What do you get the woman who has the man who is everything?”) 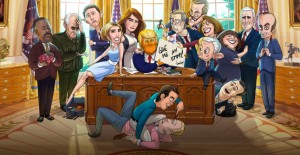 This first episode of OUR CARTOON PRESIDENT is now available for viewing on the Internet and has already gotten mixed reviews.  This is probably inevitable in a still-pluralistic society like ours!

According to many political analysts, President Trump’s actual State of the Union address delivered on Tuesday, January 30th, 2018 was full of soaring rhetoric combined with many shaky facts and figures.  These inaccurate facts have been checked many times, yet Trump persists in using them.  His later claim that this had been the most watched SOTU address in history was also contrary to fact. 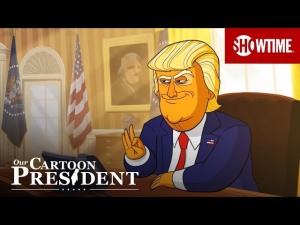 In other words, OUR CARTOON PRESIDENT should have a treasure trove of similar material to draw upon as President Trump sails forward into the second year of his term.  To quote the cartoon version, “I am a human being–and there’s no cure for that!”