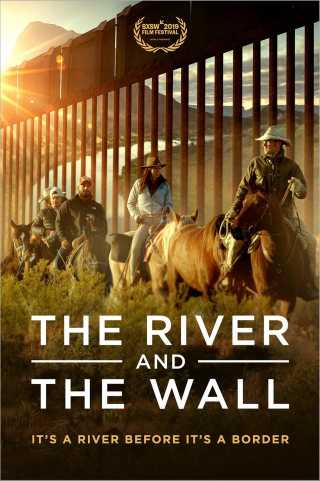 ‘THE RIVER AND THE WALL’
DOCUMENTARY RECEIVED STANDING OVATIONS AT SXSWSCREENINGS, WON THE SXSW 2019 LOUIS BLACK ‘LONE STAR’ AWARD, AND WAS THE OPENING NIGHT FILM AT THEENVIRONMENTAL FILM FESTIVAL IN THE NATION’S CAPITAL

“VISUALLY STUNNING AND POLITICALLY SHARP.”
“Visually gorgeous and acutely political, it is a vivid, engaging nature film with a message.”
“Immerses viewers in the natural world and makes an effective case for keeping it that way.”
– Caryn James, The Hollywood Reporter

“ONE OF THIS YEAR’S MUST-SEE MOVIES.”
“It is a thrilling and gorgeous tale of adventure, with humor and flat-out wonder at nature’s beauty.”
– Charles Ealy, Austin American-Statesman

“ONE OF THE BEST DOCUMENTARIES OF 2019.”
”★★★★★”
“The River and the Wall is going to be one of the most-talked about documentaries of 2019 because of its timeliness in the current political environment…If there’s a film that’s going to make you angry this year, let it be The River and the Wall. If this film doesn’t make you angry, I don’t know what will!”
– Danielle Solzman, Solzy at the Movies

BEN MASTERS’ DOCUMENTARY ’THE RIVER AND THE WALL’ (FOLLOWS THE HUGELY SUCCESSFUL ‘UNBRANDED’) TO BE RELEASED IN THEATERS AND ON DEMAND STARTING THIS FRIDAY, MAY 3 BY GRAVITAS VENTURES

ONE-NIGHT PREVIEWS START THIS THURSDAY, MAY 2 AT THEATERS IN DOZENS OF CITIES NATIONWIDE; ITUNES PRE-ORDERS AVAILABLE NOW (ON DEMAND RELEASE ON EVERY MAJOR PLATFORM DAY-AND-DATE ON MAY 3)

THIS THURSDAY, MAY 2 – PREVIEW SCREENINGS IN MARKETS NATIONWIDE
Click here to see all screenings:
https://theriverandthewall.com/screenings

Timely film takes audiences an a journey along the U.S.-Mexico border to better understand where the physical border wall, proposed by the Trump Administration, would go and the impacts it would have

The timely new documentary feature The River and The Wall(www.theriverandthewall.com), from award-winning director Ben Masters (Unbranded) and Emmy-winning producer Hillary Pierce (Tower) just had its world premiere at the 2019 SXSW Film Festival and has been an audience favorite at other recent film festivals.

Gravitas previously released Masters’ award-winning documentary feature Unbranded that followed four young cowboys as they hatched a plot to adopt, train, and ride a string of wild mustangs 3,000 miles from Mexico to Canada through the wildest terrain of the American West.

The River and The Wall follows five friends on a 1,200 mile journey along the US-Mexico border from El Paso to the Gulf of Mexico. Riding horses, bicycles, and paddling canoes, they travel along the Rio Grande and meet with landowners, border patrol agents, congressmen on both sides of the aisle, immigrants, wildlife biologists, and folks on either side of the Rio to better understand where a physical border wall would go and the impacts it would have.

The immigrant stories of two of the characters are interwoven through the journey, humanizing the controversial topic of immigration, while they travel through a landscape that could soon crumble to a wall intended to keep them out. Told through stunning cinematography of landscapes and cultures rarely visited and often demonized, The River and The Wall takes viewers on an unforgettable border journey into the most controversial and talked about topic in the world today: the border wall. You will never look at the border the same again.

“Gravitas is thrilled to be collaborating with Ben Masters and his team on The River and the Wall,” said Brendan M. Gallagher, Executive Vice President & General Counsel, Gravitas Ventures. “The film is visually stunning and provides much-needed human, practical, and environment perspectives on the divisive border wall issue that has shut down our government and polarized the country.”

“When we started filming The River and The Wall two years ago when the “build that wall” rhetoric just began, we had no idea that the issue would blow up into a government shutdown and one of the most controversial topics in the world,” said director Ben Masters. “We’ve spent the past two years documenting the border, travelled every mile of the Texas-Mexico border on bikes, horses, and canoes, and met with dozens of people on both sides of the Rio Grande to make a film that shows what the borderlands actually look like, how a wall would actually work, and how it would impact immigration, landowners, water access, wildlife, and border culture.”

Masters added: “We interviewed border patrol agents, immigrants, ranchers, wildlife biologists, Republican and Democratic congressmen, Mexicans, and Americans to hopefully give an accurate portrayal of the border and let the audience decide for themselves if a physical border wall is a good way to approach our immigration and border security challenges. At a time when there’s so much division, ignorance, and false reporting about the border, I’m excited to release the film and allow the incredible landscapes and people there to speak for themselves.”

The River and The Wall features, among others, former Democratic Congressman and newly-announced presidential candidate Beto O’Rourke as well as sitting Republican Congressman Will Hurd.

Gravitas Ventures, a Red Arrow Studios company, is a leading all rights distributor of independent feature films and documentaries. Founded in 2006, Gravitas connects independent filmmakers and producers with distribution opportunities across the globe. Working with talented directors and producers, Gravitas Ventures has distributed thousands of films into over a hundred million homes in North America – over one billion homes worldwide. Recent releases include Score: A Film Music Documentary; California Typewriter; Legion of Brothers; Katie Holmes’ feature directorial debut; All We Had, Colin Hanks’ All Things Must Pass; Being Evel from Academy Award winning director Daniel Junge and producer Johnny Knoxville; and For The Love of Spock from Director Adam Nimoy. For more information, please visit gravitasventures.com, and follow @GravitasVOD on Twitter and @gravitasventures on Instagram.

Red Arrow Studios is one of the world’s leading creators and distributors of entertainment content. Red Arrow Studios is comprised of 20 production companies in seven territories, including 10 companies based in the United States; world-leading multi-platform digital network Studio71, based in six countries; and global film and TV distributors Red Arrow Studios International and Gravitas Ventures. The group’s significant output includes scripted, non-scripted and formatted content and IP, from TV and film to short-form and branded content, made for an array of global networks and platforms. Red Arrow Studios is part of ProSiebenSat.1 Media SE, one of Europe’s leading media groups. For more information, please visit: https://redarrowstudios.com/